Breakfast – Zhenya (Maryana Spivak) has little time for her son Alyosha (Matvey Novikov), being more interested in what’s on her phone. Soon after breakfast, Alyosha will disappear.

Loveless is the fifth feature directed by Andrey Zvyagintsev. For some critics, he has become the successor to Andrei Tarkovsky. Every film has won a major prize. With Leviathan (2014) he fell foul of the Russian government and this latest film comes as a co-production in which Zvyagintsev has attracted support from French-German cultural TV channel arte and fellow filmmakers the Dardennes Brothers among others. Cannes prizewinners stick together. In the UK, the film is released by the small independent Altitude rather than one of the larger arthouse brands like Curzon Artificial Eye. I hope this doesn’t restrict audience access – it doesn’t seem to have done so far.

I’ve been surprised by some of the reviews for the film in the UK and there has been a lot of discussion about how harrowing the film is etc. I’m somebody who weeps easily in any sentimental film and copiously for a finely wrought melodrama. I sat through Loveless unmoved, but always closely engaged. This isn’t callousness on my part but rather a function of the film’s address to audiences (it may also be because I’m not a parent). The film doesn’t aim to manipulate emotions but to observe a situation. The style is ‘hyper realist’ with a camera eye that is cold and unblinking, observing, often head-on, a marriage disintegrating. The camera is often still and the digital image is pristine but desaturated, emphasising the bleakness of the coming Russian winter in the opening and closing shots of the film. I think it is a kind of anti-melodrama and I enjoy the visual splendour of a film which some critics seem to feel is too heavy-handed. I’m sure there are things I missed or haven’t thought through, but I’m confident that there is intelligence behind every move Zvyagintsev makes.

Alyosha in the woods on his way home from school at the start of the film.

The story is carefully set in 2012 (referenced via news reports and later on posters). As someone in another review has pointed out, the figure at the centre of the narrative (even if he appears only fleetingly), is 12 year-old Alyosha who was born in 2000, the first official year of Vladimir Putin’s presidency. The appraisal of society that the film offers could be argued to be a statement about ‘Putin’s Russia’. Alyosha is unlucky to be the son of Zhenya (Maryana Spivak) and Boris (Aleksey Rozin), parents who are in the process of divorcing, having both found new partners. There doesn’t seem to be a place for Alyosha in either new relationship, so perhaps it’s not surprising that he disappears one day. The narrative then becomes about the search for Alyosha and what this does (or doesn’t do) to Zhenya and Boris. In various interviews Zvyagintsev has said that the idea for the film came when he visited America in 2015 and that Bergman’s Scenes From a Marriage (Sweden 1973/4) was a filmic starting point. This implies a kind of universalist approach. The tragedy could actually happen anywhere. But Zvyagintsev is an artist who believes that universal stories have to be rooted in a specific place and he’s chosen different Russian settings for his films. In this sense Loveless is most like Elena (2011) in focusing on social class difference in suburban Moscow. Not many critics have noticed that Aleksey Rozin as Boris, also appeared as Elena’s son Sergey in the 2011 film. There are several other parallels between the two films, e.g. the potential pathway which leads boys from school into the armed forces.

The family in Loveless, though upwardly mobile, lives in a flat/apartment in a high-rise block in suburban Moscow. Boris has a desk-job in a company owned by a fundamentalist Orthodox Christian, who Zhenya refers to as operating a form of ‘Sharia Orthodox Law’. Perhaps it’s a good thing that Boris’s new partner Masha is already heavily pregnant, so he won’t lose face in his company if he divorces and remarries before anyone notices. Zhenya has some kind of interest in a beauty salon – but she has also snared a wealthy older businessman with a grown-up daughter. Both parents have their materialist concerns sorted out, but they don’t have much idea about parenting. I wondered about ‘spoilers’ at this point, but this film is not heavy on plot. It turns into a kind of police procedural when Alyosha goes missing and I need to analyse some moments to make any meaningful comments.

Boris and Zhenya with the head of the volunteer search team.

The look of the film

Zvyagintsev has worked with the same key ‘creatives’ on several films. Cinematographer Mikhail Krichman has photographed three out of four (but not Elena). Production designer/art director Andrey Ponkratov has also been on three out of four shoots (including Elena). I mention Elena for two aesthetic reasons. One is the use of opening and closing sequences without actions but heavy with a sense of something – and I’m not sure exactly what it is. We know from interviews that in Elena, the shots (outside an apartment) were shot in a studio. Loveless was supposedly all shot on location, but the complex compositions inside apartment buildings feel like they too were studio shoots – perhaps Ponkratov constructed sets inside empty apartments? In both films there is significant action outside the apartment blocks, especially in the wooded areas. Moscow appears to be like Paris with high-rise blocks some distance from the centre of the city. This kind of development is not often found in the same way in the UK (though the architecturally-famous high-rises of the Alton Estate in Roehampton that featured in Truffaut’s Fahrenheit 451 make an interesting parallel). Particularly resonant are shots through the windows and over the slopes below the high-rise where the disintegrating family live. As my viewing companion remarked, the images towards the end of the film, with families enjoying tobogganing on the snowy slopes, looks almost like a Breughel painting. The three images above show the complex mise en scène of the apartment and the more naturalistic shots of the woodland walk home that Alyosha makes from school. The trailer below also has shots of the landscapes around the high-rises.

The static head-on camera is quite disturbing in its ‘immersive’ effect. At one point it is almost like we are sitting on the other side of the works canteen table as Boris and his immediate boss eat their lunch. Boris explores issues about the firm’s moral codes as his colleague eats noisily, occasionally dropping food from his fork. As one reviewer has pointed out, we become complicit with the ‘bad parents’ when we realise that we’ve been so wrapped up in watching and criticising them that we too have failed to notice that Alyosha has disappeared. Zvyagintsev and his collaborators use the ‘Scope frame very well. Several scenes are so detailed that we feel forced to look around the screen and in one delicious shot in the open-plan office space, we notice that somebody is playing Solitaire on their desktop – a moment of frivolity in the oppressive work space.

When Boris and Zhenya finally go to the police, the narrative does change to the extent that an element of both ‘mystery’ and ‘procedure’ takes over. The procedure structures the narrative, not through the police, but through the appearance of the volunteer search group comprising volunteers who are incredibly well-organised. The group is modelled on a real life organisation called ‘Liza Alert’, formed after the tragic conclusion to the disappearance of a 5 year-old girl. This is discussed in an excellent piece by Jonathan Romney in Sight and Sound, March 2018. The police are not incompetent or uncaring as such, but simply overwhelmed by the number of missing persons and the paperwork required to progress anything. Inevitably, we make the comparison between the ineffectiveness of the police under Putin and the model of efficiency and common sense portrayed by the volunteers. They represent the possibilities of disinterested but public-spirited groups of citizens who care. They give their time and effort to a worthwhile cause. I’m tempted to think of them as representing what was good about the socialist state destroyed by rampant capitalism. Zvyagintsev shows us not just Boris and Zhenya, but many others in the worlds that they inhabit, trapped within a materialist world of screens, phones and selfies. This is presumably the ‘heavy-handedness’ some critics don’t like, but I find it a very powerful when I re-edit the film in my head and juxtapose the volunteers searching the forest and an abandoned Soviet era building with the selfie takers in a restaurant. I do have to agree, however, that Zvyagintsev tends make the women responsible for the worst excesses. Zhenya is hard, selfish and grasping. Boris is weak and at times pathetic and looks as if he has learned nothing as he moves into his new family set-up. The gender split is then repeated in other groups we see. 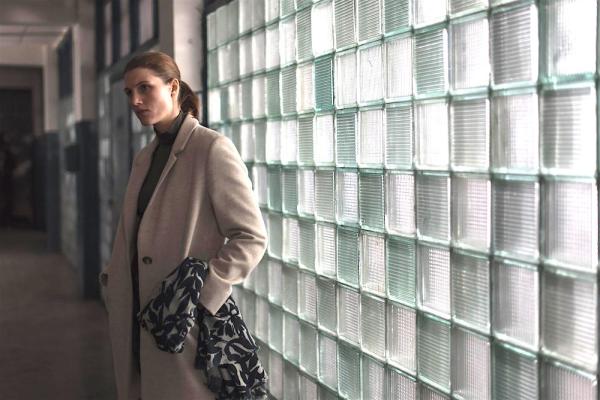 Zhenya (Maryana Spivak) is the poised, well-dressed modern woman – freed of the strains of motherhood when her son disappears?

Whereas Aleksey Rozin is an actor, like some others in the cast familiar from other Zvyagintsev films, Maryana Spivak as Zhenya is appearing in only her second cinema feature. She is tall and athletic. Zvyagintsev has chosen to show off her body, not I think in a fetishised sexist way but perhaps as an example of consumerist obsession. We see her in the beauty parlour for a waxing and then in bed with her new partner. Similarly we see Boris making love to his heavily pregnant new partner. The scenes are shot quite differently. Boris and Masha are shot from some distance away in a darkened room. Zhenya and her new partner are in a modernist apartment with a dividing panel with a large mirror. Sex for Boris and Masha seems enthusiastic, sweaty and straightforward. Zhenya is presented in more studied poses. At the end of the film we see Zhenya’s athleticism expressed now as exercise on a running machine and she dressed in a shiny new ‘Russia’ tracksuit.

A final image of Zhenya

In some ways the ‘procedural’ leads us into thinking about the very successful long-form crime narratives of recent years – except that we understand that Loveless is an art film and we don’t necessarily expect a dramatic resolution. Instead we are returned to the mystery. I’d like to finish by referring again to Jonathan Romney’s piece ‘The Lost Boy’. Romney is one of the best of the current batch of critics and even when I might disagree with him, I can see that his arguments make sense. He comments on Zvyagintsev’s use of symbolism and how contemporary (younger?) audiences seem now to be impatient with it because of their experience of the excessive ‘wash’ of media images from so many sources. They resent the arrogance of someone who challenges them to spend time thinking about what might be being symbolised. This certainly makes sense. There seems to be a rush now to read images in a superficial way and for films to be enjoyed and celebrated if they have easily understood messages. That’s not the case with Zvyagintsev and I look forward to the next five films and their presentation of a complex world with few easy answers.

The previous four films by Zvyagintsev: