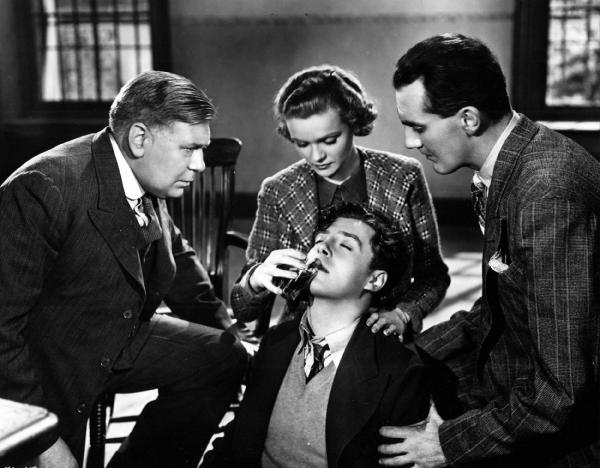 Alfred Hitchcock’s films made in the UK in the 1930s have tended to be overshadowed to some extent by his later work in Hollywood, even if some of the titles have gained a high profile after repeated UK TV screenings. The key text for film scholars is Charles Barr’s English Hitchcock (Movie Books, Cameron and Hollis, 1999). Young and Innocent is seen as the odd one out in the series of six successful thrillers Hitchcock made between 1934 and 1938. It is the only one that doesn’t focus on some form of political intrigue. On the other hand it does share elements with several of the other films. What marks it out for me is the terrific performance by Nova Pilbeam, the ‘young’ of the title, who was still only 17 when shooting began. The original title for the film, which was subsequently used for the North American release was The Girl Was Young – a dreadful title in my view and quite misleading. Like many Hitchcock films this one was based on a novel. A Shilling for Candles (1936) was one of the first crime fiction novels by Josephine Tey. She later became a celebrated writer of crime fiction as well as plays and other novels. Barr is quite scathing about the novel and it seems that most of it was changed by Charles Bennett and the other writers who worked on the screenplay. Nova Pilbeam’s character is elevated from a minor character to joint lead. 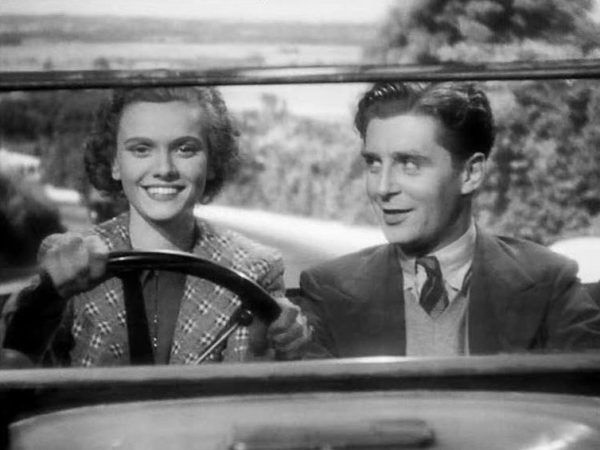 The plot is instantly recognisable because of resemblances to The Thirty-Nine Steps (1935). Pilbeam is Erica, the daughter of the Chief Constable of a South of England county police force, who by chance meets a young man, Robert Tinsdall (Derrick De Marney), who has been arrested on suspicion of the murder of a woman on a nearby secluded beach. He protests his innocence (thus the second half of the title) and events lead Erica to help him escape. Along the way they fall for each other but they have no time to get well acquainted as the police are chasing them and Robert must find a vital piece of evidence – and this might in turn help the couple find the murderer. The film is entertaining and engaging because of the skills of Hitchcock and his team which includes future Ealing director Charles Frend as editor, Bernard Knowles as DoP and the great Alfred Junge as art director. Pilbeam’s future husband Pen Tennyson (also to become an Ealing director) is listed as Assistant Director. But I think that a great deal of the vitality of the film comes from the pairing of Pilbeam and De Marney. I was struck by something about Nova Pilbeam that reminded me of Keira Knightley’s early lead roles in Bend It Like Beckham (2002) and Pirates of the Caribbean (2003). De Marney was actually aged 30 when filming began but, as Barr suggests, he seems younger. They seem a very ‘modern’ couple for the 1930s. 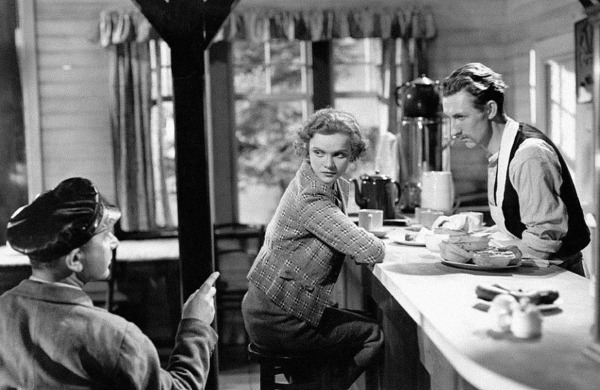 Unfortunately, the vitality of the film is let down at various times by the cheap studio production work. This was a Gaumont-British production, based initially at Shepherd’s Bush, but also at Pinewood. Barr reports a suggestion that the leading cast members might have been on location only rarely since in the outdoor scenes the characters are mainly seen in long shot. Given the results that Junge was able to achieve ten years later in his evocation of the Himalayas filmed in Surrey for Black Narcissus, I do wonder what he made of the model work, especially in the case of the railway station which becomes the location for an exciting chase sequence. The film’s pre-publicity made a lot of noise about the use of location work and Hitchcock generally uses it well. There is also a striking crane shot on the large studio set representing the dancefloor of the ‘Grand Hotel’ where the narrative climax plays out (in a manner something like the music hall ending of The 39 Steps). This sequence is notable for the band whose members are ‘blacked up’ even though they are dressed in lounge suits rather than minstrel outfits. The jazz band is quite good and I was reminded of the best Jessie Matthews musicals of the 1930s. British cinema could match Hollywood at times, but the lack of resources meant that something often had to be skimped. The extras on the DVD from Network include an intro by Charles Barr and a short documentary on Hitchcock. One of the contributors suggests that what attracted Hitchcock to move to Hollywood was the prospect of the resources to do all the things his imagination could dream up.

It’s striking how strong Nova Pilbeam’s performance is. For one so young she commands her scenes like a much more experienced actor. Wikipedia suggests that David Selznik, who would eventually sign a deal with Hitchcock in 1939, was very impressed with Pilbeam and wanted to sign her as well but her agent thought a five-year contract was not appropriate. She didn’t go to Hollywood and instead made several more British pictures as well as working in the theatre. Her career ended in 1950 when she was still a young woman. The decision not to go to America (a similar decision was made by Jessie Matthews, for similar ‘professional reasons’) was later faced by bigger stars such as Deborah Kerr and Jean Simmons, who both went and made a success of the move. Erica does seem to me to be a character who has equal ‘agency’ with Robert. It would be interesting to compare the role with that played by Margaret Lockwood in The Lady Vanishes (1938).

I was surprised to discover that it is Donald Spoto in his Hitchcock biography The Dark Side of Genius, Frederick Muller 1983, who gives a more interesting reading of the film than Charles Barr. Barr focuses mainly on narrative structure but Spoto offers various observations that convince me that his general argument is sound. His basic point is that the film is essentially a gentle comic melodrama, but that it offers ‘markers’ for some of the dramatic highlights of later Hitchcock triumphs and that ideas about illusion and not ‘seeing’ clearly are woven throughout the narrative. So Robert escapes police custody by wearing a pair of spectacles with thick lenses through which he can barely see but which form a good disguise. At the end of the film, the murderer is ‘unmasked’ by the tic he suffers which makes him blink uncontrollably. Spoto reports Hitchcock stating that he placed a children’s birthday party at the centre of the story to act as a symbol as well as a narrative device. The children blindfold a character which allows the central couple to escape the party. This ‘play acting’ is matched by a couple of occasions when characters don a uniform or a costume to pass as somebody else. In terms of ‘markers’ the film includes some interesting set pieces carefully shot on sound stages that perhaps suggest scenes in later Hollywood films like North by Northwest (1959) and The Birds (1962). If you haven’t seen it, Young and Innocent is well worth tracking down. I watched it on Network’s DVD, a Special Edition as part of ‘Hitchcock: The British Years’.