Witnesses is a global crime/mystery series in the now familiar long-form narrative format. It has inevitably been compared to various other examples of what is becoming a global model, derived from the success of The Killing and The Bridge. Like the Scandinavian serials, the second season was broadcast on BBC4 in the UK ending a few weeks ago. (Season 1 was broadcast on Channel 4.) The key common element is a pair of police investigators in which the woman is the lead figure. What makes Witnesses ‘different’, at least in the first two seasons/series/serials, is the setting and the inclusion of some of the tropes of the horror film.

The location is Northern France. The police team is based in Lille and the action seems to range across the whole Nord-Pas de Calais region with an emphasis on the coast in both series. In fact, the action spreads all the way to Mont-Saint-Michel and Granville in Normandy several hundred kilometres away. The distances are so great that they detract from the realism of some of the plot devices, but conversely heighten the fantasy elements. Some of the Scandinavian narratives make use of similar settings but it occurred to me that Witnesses might also share something with the Welsh serial Hinterland. A second possible reference for me was the stories of Fred Vargas whose crime novels have the same mystery elements and sometimes use similar locations (e.g. by the coast or in rural Normandy). Although Vargas has been adapted in France, I’m not aware of any overseas sales.

The two central characters are Sandra Winckler (Marie Dompnier) and Justin (Jan Hammenecker). Sandra is the typical ‘maverick’ cop and Justin is the more stable partner who is generally in the background , but whose personal life is also explored. Each of the two seasons so far features a similar credit sequence with Sandra striding towards the camera along a ‘boardwalk’ past a row of bathing huts. She then reaches a dilapidated hut which blocks her path and she opens its doors to reveal a fantasy figure. In the first season this is a wolf (see below) and in the second three strange children. The music in the title sequence by the UK ‘trip-hop’ artist Tricky with Francesca Belmonte has an ethereal tone which underlines the potential fantasy of the stories. The song’s title is ‘We Don’t Die’ and the lyrics fit the stories so well I’m intrigued to see what the writer-creators Marc Herpoux and Hervé Hadmar (who also directs) will come up with next. The first story begins with the discovery of the corpses of people recently buried but now dug up and arranged in family groups in public places such as a show house on a new estate. As Sandra investigates she uncovers a connection to her former boss in Lille who has become something of a local celebrity.

In Season 2, the story begins with the discovery of a bus parked on a country road. Inside the bus are 15 frozen corpses of men who disappeared some time ago. Eventually the investigation will uncover a complex interweaving of stories which will eventually entrap Sandra herself and in which she will team up with a woman who herself disappeared and is then discovered three years later, unable to remember what happened to her. This is Catherine Keemer, rather confusingly played by the wonderful Audrey Fleurot, the rather tempestuous lawyer from Engrenages (Spiral). My confusion was because Series 6 of Engrenages followed Witnesses a week later on BBC4 and I found myself ‘catching up’ on Witnesses while watching the first episodes of Engrenages. Sandra and Catherine end up sleuthing together in Witnesses and a rather stylish couple they make – two tall, slim, thirty-somethings with flowing tresses and a similar dress sense. 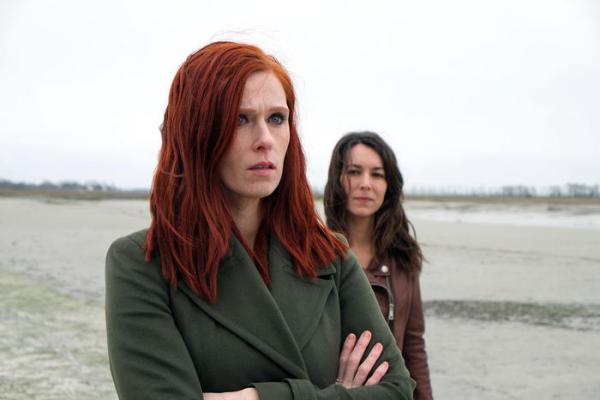 Apart from the characterisation around Sandra and Catherine, there two noticeable aspects of this second narrative which distinguish it from similar series. First are the aesthetics, dominated by occasional uses of aerial shots of the coast and forests of the region, the cinematography in general and the use of music, the overall effect of which is to create a sense of mystery and unease. Ironically, there is a sense of the romantic and the gothic, even when action takes place around a wind farm. The mystery/horror tropes are signified in several ways, all of which take us into the complex plotting around the history of an orphanage located on Mont Saint-Michel. This is a great location (and a world heritage site). The best recent orphanage narrative is arguably El orfanato (Spain 2007) and this one uses some of the same tropes with drawings by children and photographs from some time ago. The children seem to have been fascinated by the story of the Minotaur. The focus on children also draws in both Catherine and Sandra. Catherine is close to her eldest child, a young teenage daughter and Sandra has two younger daughters. I won’t spoil the plot any further but the links seem clear as well as the dangers for the two women. I’m always intrigued by the ways in which these kinds of crime narratives share sometimes quite specific plot ideas and details with others released around the same time. Witnesses reminded me of elements in both Jo Nesbø’s The Snowman (2017) and the UK TV series The Fall (2013- ). Witnesses is a female-centred narrative created, written and directed by men. That’s just an observation, but I’m now intrigued by Engrenages 6 in which Audrey Fleurot is again a leading character in a narrative with Caroline Proust as top-billed – but with a largely male supporting cast. Gender is clearly an issue in the episodes I’ve seen so far and perhaps it’s time to think again about gender and crime fiction?

I enjoyed Witnesses but I think it was too long (8 x 1 hour episodes) and too complicated. By the end I had forgotten elements of the first two episodes and I’m not sure I fully appreciated the narrative resolution. The first season was only six episodes and that seemed right.