Jinnah as an old man (Christopher Lee) meets his younger self (played by Richard Lintern) during the tour arranged by his heavenly guide.

I’m posting this as part of the current focus on Indian Partition in August 1947.

Sometime in the early 1980s I remember watching an extraordinary film, Blood of Hussain (Pakistan-UK 1980), in the Brixton Ritzy. When I heard that the same director, Jamil Dehlavi had made a biopic about Muhammad Ali Jinnah, the leader who is alleged to have forced the partition of India and the creation of the state of Pakistan, I immediately wanted to see the film. Unfortunately, although the film had a successful festival run it was never properly released in the UK and I’m not sure how it was released in Pakistan in the midst of controversy. A DVD appeared in India in 2004 and the film has now been seen and seemingly enjoyed by many Pakistanis. In 2015 Jamil Dehlavi seems to have re-asserted his copyright and a dual format Blu-ray/DVD is now available from Eureka in the UK.

For me it has certainly been worth it to wait for this release. I think this is an excellent film with an unusual take on the biopic and it was interesting to watch it for the first time a few days after seeing Gurinder Chadha’s Viceroy’s House (UK 2017). Jamil Dehlavi is based mainly in Europe and for this important historical drama he decided to use mostly British actors and crew and to attempt to shoot in Pakistan. Unfortunately, there are no ‘extras’ on the Blu-ray/DVD release and little material available online, so it is difficult to work out what was planned originally and what had to be changed when Pakistani support was later withdrawn. IMDb simply lists Karachi and London as locations. The resulting film is quite unlike either mainstream South Asian popular cinema or indeed like Anglo-American or ‘international cinema’. So it doesn’t look like Richard Attenborough’s Gandhi (or Chadha’s more recent Viceroy’s House) despite covering many of the same events. It seemed to me to be visually like some Indian parallel cinema films (partly because of some of the casting decisions) or like British independent films of the 1980s. I’m thinking here of the more experimental films shown on Channel 4, though the acting performances here are much better. The odd visual style is partly because the budget perhaps didn’t always allow for crowd scenes with any depth and the few ‘generic’ locations had to stand in for official residencies, courts, libraries etc. I think also that locations might have had to be changed at the last minute. There is therefore a feel of a more abstract presentation.

Jinnah created the situation which forced the British to consider and then implement the partition of India as a prerequisite for their withdrawal. He did so by steadfastly maintaining that Muslims in an independent India would be fearful of domination by Hindus and that the only secure means of progress was the creation of Pakistan as a new state in which Muslims would be safe. The film narrative depicts the historical events in such a way as to consider them from the perspective of Jinnah himself and not as an objective account. (I don’t mean to criticise the film, simply to point out that it isn’t a straightforward ‘historical’ account.) Dehlavi and his co-scriptwriter Akbar Ahmed constructed the narrative around the familiar, but still unusual, device of giving us a dying Jinnah in November 1948 who meets a ‘recording angel’. The ‘angel’ explains that the bureaucracy of heaven has failed  and he must take Jinnah through the key points in his life, ‘dropping in’ to specific scenes and a couple of occasions interacting with his younger self. These fantasy sequences extend the narrative forward in time, so, for example, Jinnah is told that Mountbatten will be killed by the IRA. Heaven has become computerised and that’s why things are not working. The implication is that the ‘evidence’ that they find will determine how Jinnah will be treated in the afterlife, what will happen to his reputation and how he will come to terms with himself.

There are only three bona fide ‘film stars’ in the cast, headed by Christopher Lee who is excellent and by Shashi Kapoor, equally good as the ‘recording angel’. Kapoor has appeared in over 150 films, mostly in Hindi but several in English. He married Jennifer Kendal and appeared with her several times in parallel films in India. He and Lee make an excellent pairing. Louis Mountbatten, the ‘last Viceroy’ is played by James Fox, again perfect casting (except that Fox was older at the time of shooting than Mountbatten had been in 1947). The rest of the main cast comprises actors mainly known for work in British television and they are also uniformly good. In particular, Richard Lintern, who I must have seen many times on TV without noting his performances, succeeds as a believable younger Jinnah whom we first meet during the First World War and then follow up to the 1930s. British Asians or Asians based in the UK play other roles including the historical figures such as Gandhi and Nehru. I think that because Gandhi is in one sense a very recognisable figure because of his dress and mannerisms, we easily accept an ‘impersonation’ and don’t look or listen very carefully. But we aren’t distracted by wondering if this is really Gandhi. With Nehru, I think it’s more difficult. We expect to see intelligence and sophistication but we aren’t really sure what else. IMDB informs me that ‘Robert Ashby’ was born as Rashid Suhrawardy, the son of a former Prime Minister of Pakistan, so he has a head start. Jamil Dehlavi did, however, decide to include the alleged liaison between Nehru and Lady Mountbatten (Maria Aitken) and I wasn’t completely convinced by the representation of lover and statesman. This isn’t a failing by the actor and overall everything hangs together very well with Dehlavi’s direction supported by his crew. Nic Knowland the DoP is a veteran with a long list of film and TV credits and I note that he shot the last two Peter Strickland films, Berberian Sound Studio and The Duke of Burgundy, two notable achievements. 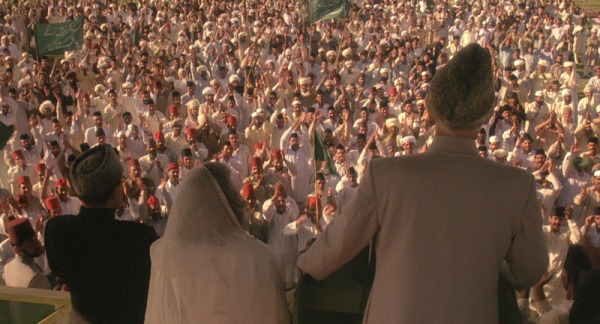 Jinnah speaks to the crowds with his sister alongside

The question for most viewers will be, “What kind of man was Jinnah?” with the corollary being “Is this biopic a hagiography?”. I would say that it can’t be a hagiography since the angel shows Jinnah what he has done and what the consequences (not all good!) have been. On the other hand, the narrative sets out to show that Jinnah was a man of honour and principle and that he did what he thought was the ‘right thing’ in the circumstances. I didn’t have an axe to grind when I started watching, though I was aware that in most British and Indian versions of the story Jinnah feels like the bad guy. After watching the film, I felt that I had learned a few things (about what happened after partition) and that I had a clearer picture of the man himself. You can’t really ask more of a biopic except that it is also entertaining – and I felt that was the case. The film is almost entirely presented in English. Most of the characters would have used English on a regular basis. Jinnah himself had Gujarati as his native tongue but was fluent in English as a barrister who practised law in London.

One of the fantasy scenes in which Jinnah ‘prosecutes’ Mountbatten (James Fox) and the angel (as judge) looks on. (These last two mages are from DVDbeaver.com)

The extent to which Jinnah is a genuine biopic is debatable. The furthest back we go is to 1916 when Jinnah was 39 years old and meeting the 16 year-old woman who would later become his wife. One of the functions of the 1916 sequence is to reveal the hypocrisy in Jinnah’s approach to ‘mixed marriage’. He wants to marry a Parsee girl but will later forbid his daughter to marry a Parsee. The film is quite prepared to present Jinnah as a complex individual. One of the interesting shifts that I don’t think I’d registered in other films is the way that for the British, Jinnah went from ‘favoured’ status (he was never imprisoned like Nehru or Gandhi) to someone who posed the problem of partition. What might have been explained a little more in the biopic was the way in which Jinnah, who was initially a Congress Party member, decided to withdraw and focus on the Muslim League (he was initially in both organisations).

The Eureka package is widely available at reasonable prices and apart from the lack of extras, I think this is a ‘must have’ for anyone interested in South Asian cinema, the history of India or indeed the performances of Christopher Lee.

This is the trailer from Eureka: