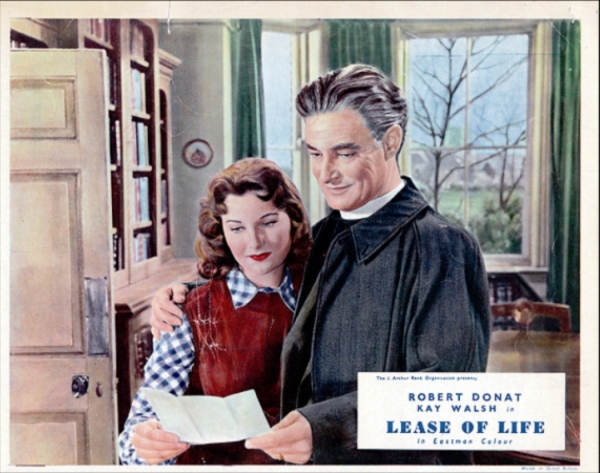 Robert Donat as the Rev. Thorne and Adrienne Corri as his daughter Susan

Ealing Studios as a brand has become so associated in the public mind with the comedies of the late 1940s and early 1950s that many of its most interesting productions are barely seen or discussed. Fortunately, the ‘Ealing Rarities’ collections of DVDs, first published in 2013, have made several titles available for the first time on disc. The series runs to 14 volumes, each of which comprises a 2-disc set with two features on each disc. The four titles are a mix of films from the whole of the period 1930-1959. This makes sense as a way of selling the older titles but punters can benefit too, picking up unknown gems from the 1930s. The volumes were on a limited sales offer this week and I bought three volumes for £4 to £5 each. 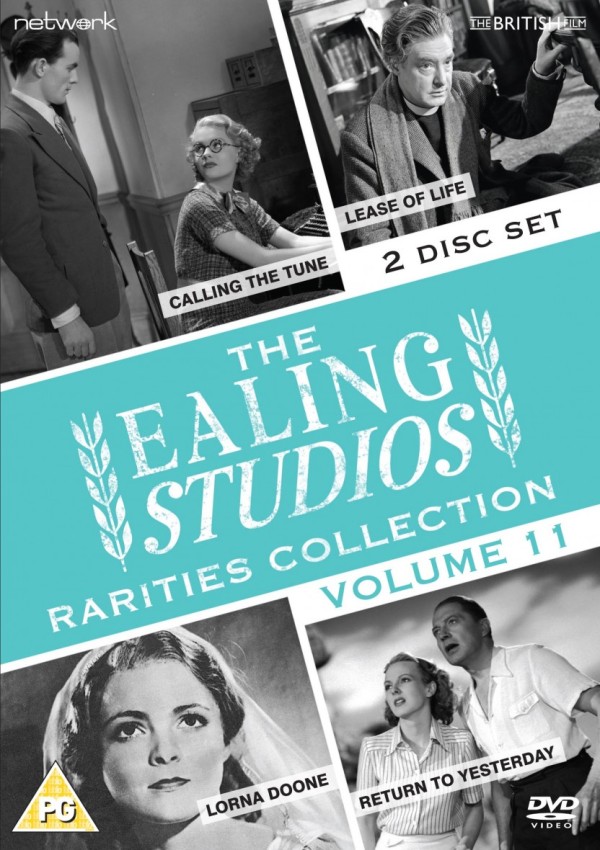 I was most excited by the prospect of watching Lease for Life from 1954. This drama in Eastman Colour offers the major star Robert Donat in his only Ealing role, supported by a fine cast. With a screenplay by Eric Ambler, direction by Ealing regular Charles Frend and cinematography by Douglas Slocombe it promised to be a fascinating watch – and I wasn’t disappointed. It’s worth emphasising that Donat was arguably the major male romantic star of the 1930s in the UK, a man loved by millions who spurned Hollywood and preferred to work in the UK (sometimes on American-financed films). Because of ill-health (chronic asthma) he made only 21 films and died in 1958 in his early 50s. In Lease of Life he plays a country vicar in the East Riding of Yorkshire. He was only 49 at the time but looks much older, possibly because of make-up and greying hair. He hadn’t made a film for three years and he would make only one more after it, so part of his appearance may be down to his own state of health. The plot involves his character being told that he only has a year to live, but if this makes the film sound grim, Donat’s performance soon alters such a view. He’s magnificent. 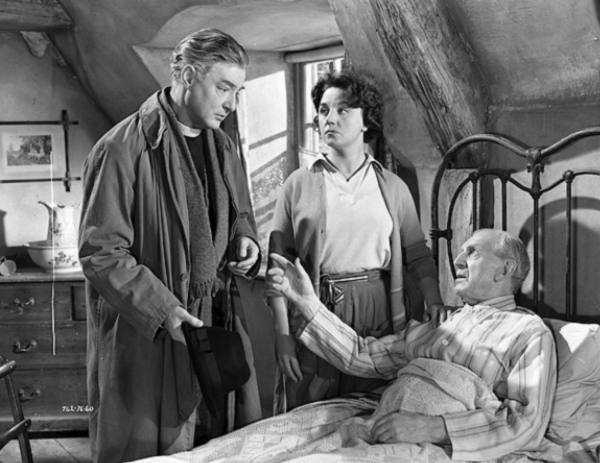 The plot is very simple (so I don’t think I’m spoiling the narrative pleasure by outlining it in some detail). Ambler gives the vicar (Rev. William Thorne) two problems to worry about (and then lands him with the news that he is going to die in about a year’s time). First he is asked by a dying parishioner to be his executor and to keep the will and a sizeable sum of money away from the man’s younger wife (Ealing regular Vida Hope) – the money is to go to the man’s son, still missing after the war. Reluctantly, the vicar agrees, knowing it is his duty to do so. He’s a kindly but not very inspiring vicar and he hasn’t saved any money. His second problem is that his talented daughter Susan (the fabulous Adrienne Corri who so graces Jean Renoir’s The River, 1950) wants to go to a music school in London, but he can’t afford to support her. A possible solution to his worries is that the local public school wants a new chaplain and the Dean of the cathedral in ‘Gilchester’ suggests Thorne. Thorne himself doesn’t realise why he has been invited to give the sermon at the school’s Founder’s Day service (but his wife Vera (Kay Walsh) realises that it is a kind of test of suitability). The chaplaincy would be a considerable step up in terms of income. The sermon comes halfway through the film and Thorne, in a moment of inspiration, tears up his prepared sermon and delivers an impassioned call to the boys to live their lives without the fear of breaking rules and to simply go out and fulfil themselves in finding God in life. Thorne is ‘re-born’, he has a new ‘lease of life’. The school’s headmaster is not enthusiastic about Thorne’s reference to a ‘Headmaster God’ as the wrong concept of religion for boys to have.

In the final third of the film the two problems prove difficult for Thorne to resolve in a satisfactory way and Ambler complicates things to create a climax. What is important too is that both June and Vera become active in their own right rather than just supporting Thorne. The other main character is June’s music teacher, the young organist at the cathedral, handsome (and quite cruel) as played by Denholm Elliott. 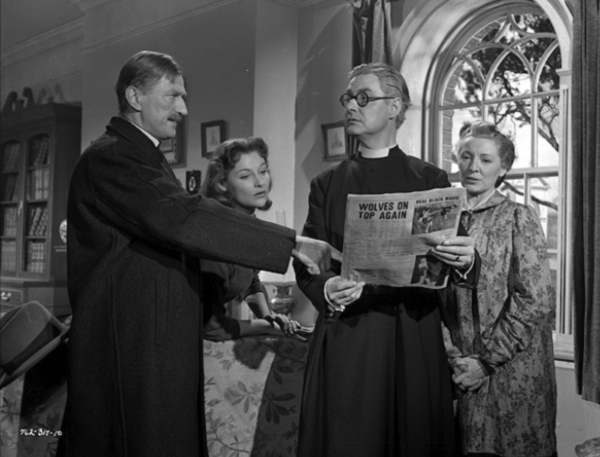 A parishioner calls on the vicar, concerned about the newspaper coverage of the sermon

The main attraction of the film is Robert Donat’s performance. In the pulpit delivering his sermon to the school he is transformed and energised but it is his voice and trademark delivery that stands out. I think mellifluous is the adjective often used to describe Donat’s voice. Here it sounds both soft and melodious, but also strong – and a big change from the character’s usually mild demeanour. So, in narrative terms it works to give the vicar in ailing health the energy to continue and to overcome the obstacles that lie before him. One interesting aspect of the film is the media interest generated by the sermon which gets everybody talking. In the early 1950s Ealing made films satirising the rise of television and, like this one, using the media as agencies in moral debates.

The other interesting aspect of the film is the use of location shooting to create ‘authenticity’ of setting and a feature of many Ealing films during and after the war. I was reminded of The Loves of Joanna Godden (1947), also directed by Charles Frend and set on the Romney Marshes. That was a black and white film and here the same cinematographer creates a rural landscape using Eastman Colour. The shoot was located in what was then the East Riding of Yorkshire with Beverley’s Minster standing in for the cathedral (Wikipedia suggests that the Minster is larger than many English cathedrals) and the village of Lund a few miles away acting as the vicar’s parish. The film is a transport enthusiast’s treat with footage of the town centre including the specially adapted buses needed to pass beneath the 15th century ‘Bar gate’. Railway scenes were filmed at Eton and Windsor and there is a scene featuring Susan’s arrival in London in a train hauled by Britannia Pacific 70020, only built in 1951 as a BR standard locomotive. Overall the Eastman Colour on the Network DVD is OK, but I did wonder about the make-up and how it appears in HD on a TV set.

The DVD set includes a slide gallery (see the images above with a lobby card and publicity stills). It also includes a Press Book from the period and I would recommend this for any student of British cinema history. The Press Book includes the kinds of ads to appear in local newspaper display listings as well as competitions and other ways of attracting audiences. It also features interviews and articles on the stars. The piece on Kay Walsh is interesting, pointing out how this ‘glamorous star’ of 1930s and 1940s cinema was prepared to be made-up as the older and ‘dowdy’ vicar’s wife in order to play opposite Robert Donat. There is also coverage of the outfits worn by Adrienne Corri, an important ‘tie-in’ feature for films of the period.

I’m pleased to have been able to view this film and I’m looking forward to exploring more of the Ealing back catalogue in the Network DVDs.