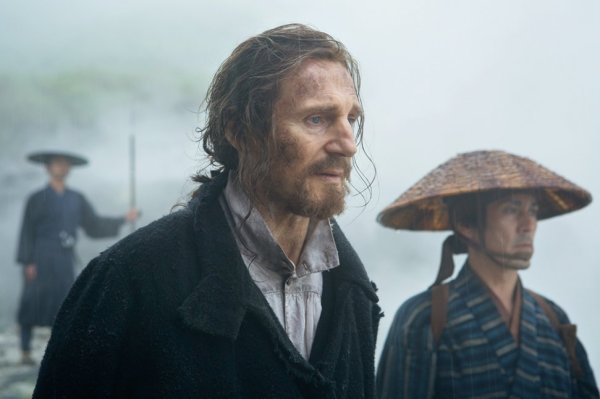 Martin Scorsese’s adaptation of the novel Silence by Japanese Christian (and Roman Catholic) Endō Shūsaku (1923-1996) follows a Japanese film adaptation, Chinmoku directed by Shinoda Masahiro in 1971. There was also a Portuguese film in 1996, Os Olhos da Ásia, which featured similar historical events. Scorsese thus finds himself in the same position as with his previous remakes, Cape Fear and The Departed – what can he add? I need to see the Japanese version of Silence to judge whether his close personal interest has been a bonus or a burden in interpreting the narrative. My verdict on The Departed was that he didn’t match the Hong Kong original. At the moment I’m ambivalent as to whether or not his most recent remake works.

The background to the narrative is the attempt by both traders and missionaries to ‘open up’ Japan to the West (i.e. the maritime nations of Spain, Portugal, The Netherlands and England) in the 16th and 17th centuries. These European incursions coincided with the period of civil wars in Japan, the final triumph of the Tokugawa clan and the beginning of the long Shogunate which would only finally succumb to American trade (and military power) in the 1850s. Silence begins in 1640 when the Shogunate has banned Christian missions and forced up to 300,000 converts to deny their Christian beliefs. Two young Portuguese Jesuits set off from Macau (the Portuguese colony on the Chinese coast) to find Father Ferreira (Liam Neeson) one of their teachers/mentors who is rumoured to have renounced his faith and who is now living as a Japanese. The two young men, Fr. Rodrigues (Andrew Garfield) and Fr. Garrpe (Adam Driver) land secretly in Japan and are hidden by Christian villagers on the coast near Nagasaki (the port where Dutch traders eventually negotiated sole trading rights for the next 200 years). The two Jesuits face an almost impossible mission. They wish to prove that Fr. Ferreira couldn’t/wouldn’t commit apostasy but very quickly they see that the local governor acting as ‘inquisitor’ is willing to adopt various strategies involving torture to force renunciation. Both Jesuits are eventually captured. How will they withstand torture, mainly in the form of watching the villagers die, if the Jesuits refuse to renounce their faith? 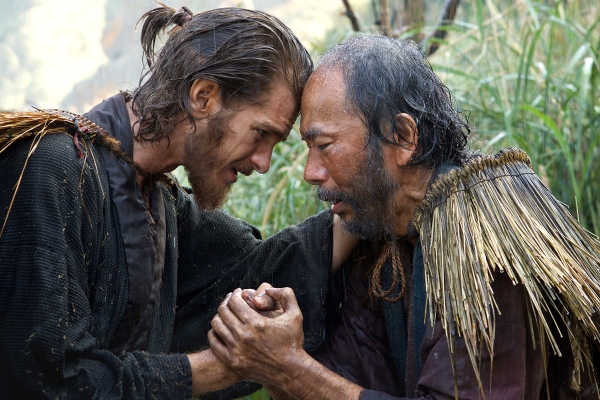 Fr. Rodrigues (Andrew Garfield) with one of the Christian villagers

This is a very long film (161 minutes) and there isn’t as much ‘action’ as I expected. I confess that my attention lapsed at times. I thought I had stayed with the narrative all through but watching the trailer and some of the clips available online, I’m beginning to think I missed some moments. The film is beautifully photographed by Rodrigo Prieto, edited by Thelma Schoonmaker and designed by Dante Ferretti – so it looks great. This is especially true of the scenes in the mists that shroud the priests’ journeys by small boat or through the mountains – classical Japanese cinema (especially Mizoguchi) comes to mind. Much of the film was actually shot in Taiwan, though I noted from the credits that some work was based in Kyoto, the home of Japanese historical drama. But no matter how great the film looks, I have problems with the narrative.

This is really Andrew Garfield’s film – Adam Driver (looking almost skeletal) becomes almost a secondary character. Garfield is presented as almost a Christ-like figure (i.e. like the conventional 17th century images of Christ in Europe) and indeed this seems to be the central narrative theme. Is Fr. Rodrigues too concerned with seeing himself as the image of Christ and therefore unable to see the wider picture? As a non-believer I can be reasonably objective about this tendency, but because I find the Japanese history so fascinating and because I see the missionaries as part of mercantilist/capitalist attempts to colonise, my sympathies are generally with the Japanese characters. This should be one of the strengths of the film. The two most engaging characters for me are the interpreter (the wonderful Asano Tadanobu, last seen by me in Harmonium (Japan-France 2016)) and Ogata Issei as the governor/inquisitor. Ogata is remarkable and I perked up whenever he appeared. Yes, he is responsible for torture and death, but at least there is a reason behind his actions, which he explains in a tale about a daimyo (feudal lord) and his four concubines – a clear allegory about the four foreign powers squabbling among themselves and causing unrest in Japan. By contrast, what do the Jesuits offer in a country that already has both Buddhism (imported via China) and Shinto? Why do they need another religion? It’s not as if these Christians have liberated Europeans from feudal rule. I’m intrigued as to how the Japanese version by Shinoda handles this. Scorsese’s script (with Jay Cocks) has the Japanese inquisitor argue that Japan is a ‘swamp’ in which Christianity can’t put down roots. ‘Swamp’ as a description seems to come from the novel, but to me sounds rather demeaning. The suggestion is that Japanese converts simply grasped the hope of this new religion to assuage the misery of their lives in a feudal state without ever understanding it. Christians have always believed in the universality of their beliefs and the righteousness of the gospel teachings. But from the perspectives of other cultures, as the interpreter comments, this looks like arrogance.

During the screening, I did wonder why the Catholic Church successfully grew a large community of adherents across Latin America but had relatively little success in Asia. I note that some reviewers refer to The Mission (UK-US 1986) with Jeremy Irons and Robert De Niro as a comparison film for The Silence. I haven’t seen that film, but I understand that the Spanish missionary priest and his lay companion positively help the local people in their fight against Portuguese slave traders. Perhaps Catholicism is not necessarily ‘universal’? Is faith universal? Must it always be contextualised in relation to different cultures? It’s often said that the Catholicism of filmmakers like Hitchcock and Scorsese helps to explain their fascination with guilt, self-doubt etc. I can see that I should have been open to these questions in watching Silence, but the film didn’t move me as I hoped. I can see though that if you believe in a supreme God, the ‘silence of God’ in the face of the suffering must be hard to accept. The narrative provides a ‘way in’ to understanding this by offering us a Judas-like figure, Kichijiro (Kubozuka Yôsuke) who is present throughout, ‘testing’ Fr. Rodrigues.

The Silence is presented with most of the lead characters speaking English and with subtitles for the Japanese speech. The Japanese speak English with accents that reveal the class distinctions between peasants and nobility. I suppose this makes sense but I do wonder why, when non-Anglophone directors can make films in English, Americans (and Brits) won’t use the appropriate languages for the characters in their films. Portuguese-speaking Japanese actors in 2016 is a bit of a stretch (though there are many Japanese-Brazilians) but the principle remains sound. Silence is an impressive film and Catholic audiences may find the questions of faith more riveting than I did, but some kinds of personal projects are always likely to be problematic. It would be good if Marty returned to a neglected genre that he has conquered before. How about a decent female-centred melodrama?