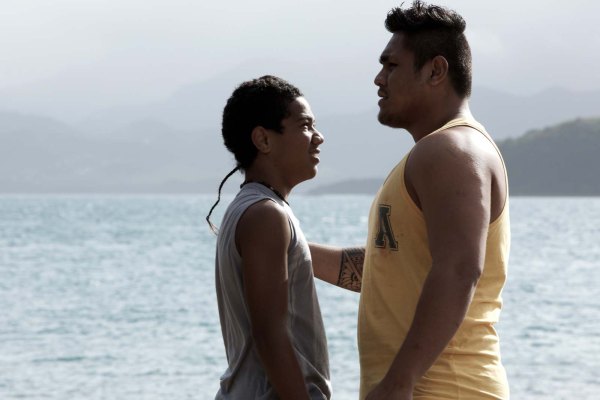 Soane (Toki Pilioko) and his younger brother on his home island

Mercenaire is the first fiction feature by writer-director Sacha Wolff. While it isn’t anything very unusual in terms of narrative structure or presentation, it scores heavily in introducing a new world for many filmgoers. This is a family drama and sports drama set in the context of post-colonial/neo-colonial French society. The central character Soane is an 18 year-old living in the Wallis Islands, an ‘overseas collectivity’ of France often considered to be part of New Caledonia in the South Pacific. One day he is spotted playing rugby (union) by ‘Abraham’, an agent who plans to ‘sell’ him to a French semi-pro rugby team and thence to take 10% of what he earns. Soane isn’t sure about this arrangement but he needs to escape from his abusive father and he duly sets off for France. But when he arrives the French ‘collecting’ club decide he is too small (though to most of us, like many players from the islands, he seems like a colossus). All Soane can do is to seek out a cousin and join a more desperate club who pay him peanuts but also find him a part-time job. Now he has his father and Abraham (who paid for his airline ticket) as enemies while he struggles to make a new life. How will it all be resolved?

The two generic repertoires provide the narrative with some familiar elements, but there is enough different/unusual material to make this a worthwhile watch and the central performance by Toki Pilioko, a genuine Wallis Islander, is a standout. As the director points out in a Cineuropa interview, most people in France have little or no knowledge of New Caledonia. Soane is therefore treated as an immigrant and his teammates assume he is a Maori and call him an ‘All Black’ (a New Zealand international rugby player). Because of French colonial policy, New Caledonia is part of Metropolitan France and Soane speaks French. He does find himself in a multinational team however. One of the pros is a 35 year-old Georgian, forced to keep playing in the fourth tier (?) of French rugby in order to send money home. These ‘imports’ are treated very badly – paid little and forced to take illegal supplements to add weight and muscle. In a sense they are treated like cattle, similarly pumped with drugs. One ironic consequence of bringing in islanders to act as beefy props is that Soane appreciates one of the local young women who hangs round the team. She sees herself as a ‘fatty’, but Soane thinks she’s beautiful.

I think the family drama is there to broaden the appeal of the sports drama. It is interesting as a narrative but I would have liked a bit more about semi-pro rugby as a business and a culture. The hot bed for rugby in France is the South-West and that’s where the film seems to be set. There is also a semi-pro rugby league structure in the region and I wonder whether this has the same problems with exploitation of islanders. Rugby league in the UK has recruited players from the islands (Fiji, Samoa, Tonga) and I don’t know if they are subject to the same kinds of racist colonialist attitudes. Most Pacific Islanders join teams in Australia or New Zealand and that is another story, beyond my knowledge. Sacha Wolff in his interview says he doesn’t know any other rugby films. Someone should introduce him to This Sporting Life (UK 1963), Lindsay Anderson’s classic British film in which a young miner (Richard Harris) is recruited by the owner of a professional rugby league team precisely because he demonstrates ‘spirit and aggression’ – something Soane has to learn both on the field and off it. More sporting dramas around these kinds of stories would be welcome. I’m not sure if Mercenaire will get any kind of international distribution, but I would recommend it.

Excerpt dealing with Soane’s arrival in France (with English subs):

French TV clip with a report on the whole issue of recruiting Polynesians into French rugby.