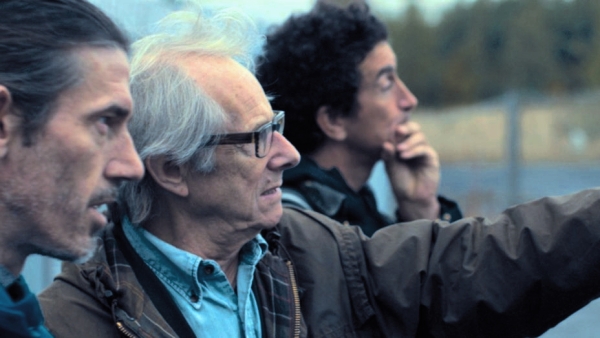 For over 25 years since the release of Hidden Agenda (1990), Ken Loach has been the most consistently successful British filmmaker – not in gross box office, but simply in terms of producing films regularly and putting working-class characters (English, Irish, Scottish, Spanish, Latin-American) on screen in ways that do them justice. Before that he had a prolific career in UK TV drama and film and a great success in cinemas with Kes (1969) before he was sidelined in the Thatcher 80s when ‘greed was good’ and the working-class were hammered before being marginalised. Ken will be 80 in a few days and this new documentary was released midway between his birthday and the award of a second Palme d’Or at Cannes to his company Sixteen Films for I, Daniel Blake. Ken Loach certainly deserves a cinema documentary made about him. Unfortunately there are some problems with this one.

Director Louise Osmond is a celebrated documentarist whose last film Dark Horse (2015) won prizes at Sundance and at the British Independent Film Awards and she had full access to Loach’s preparations for shooting I, Daniel Blake, as well as to Ken and his collaborators. I’m puzzled by the lack of real analysis of the work and by the poor technical qualities of her film. To be fair, Ken Loach has had an eventful life so far and his films and television material represent a formidable body of work. To do justice to the man and his work would need a documentary series rather than a single 93 minute film. I’ve seen all Ken’s feature films (apart from the new one) and most of the important TV work. It isn’t surprising then that I enjoyed being reminded of the work and that I was grateful for the archive material insights into his early life alongside the contributions of his family. The film also includes useful contributions from Tony Garnett and Gabriel Byrne (who give the best insights into Loach as a committed director) and a host of other talking heads with stories and observations. Osmond’s strategy is to use the making of I, Daniel Blake as a running example of Loach at work. She then breaks into this ‘making of’ narrative to visits distinct periods in Loach’s life and career, not necessarily in chronological order.

There are arguably four sections to the film to add to the ‘making of’ doc. We get archive photos and memories to learn about both Loach the boy from Nuneaton and Loach the paterfamilias in later life. Tony Garnett takes us through the early work at the BBC and explains that Ken was not really ‘politicised’ until he met the writer Jim Allen in the late 1960s. Garnett’s analysis ends with Kes in 1969. The third section deals with the frustrations of the 1970s and 1980s and in particular on the cancellations of TV commissions and the last minute cancellation of Jim Allen’s Royal Court play Perdition in 1987 – a furore over the exposure of Zionism during the Second World War in Hungary that seems very contemporary today. Loach was reduced to making commercials to avoid financial disaster – something which still makes him feel ashamed. The fourth section plots the ‘renewal’ following a Cannes prize for Hidden Agenda. Throughout the film Ken responds carefully, guardedly perhaps with lots of self-deprecation, but also occasionally with the steely determination mentioned by both Garnett and Byrne.

The narrative structure is intended to serve the film’s title – to present the Ken Loach who is loved (by the left) and loathed (by the right). But this is very simplistic and demeaning. Loach is also treated with condescension by many of the so-called ‘liberal élite’ in the UK. His films are seen by this group to be all the same, without any real analysis. There is an indication of this in Liz Forgan’s explanation of why Channel 4 refused to broadcast Ken’s 1980s series on Questions of Leadership on the grounds that they all argued that trade union leaders had betrayed their members. I think it is a weakness of the documentary to not explore Ken’s politics and the different politics of his films across the years. My own question to Ken would be why he has always set his films in one of London, Lancashire, Yorkshire, Strathclyde or Ireland. Why not the Midlands? Why not Nuneaton or Oxford which he would know from his own experience (since this is part of why he casts actors and recruits writers)? I’d also ask why there are relatively few non-white characters in most of the films and only one film (Ae Fond Kiss) specifically about a migrant family? (I’m not arguing that he should make a film about any particular set of characters – only that it is an interesting question to ask.)

The technical problem with the film is now a common-place – and already identified as a problem with Loach’s own Spirit of ’45. All of Loach’s early TV work was shot 4:3 on video or 1.37:1 on 16mm film. Even a feature like Kes was shot for 1.66:1 projection. Yet in Versus all this early material is either cropped or squeezed to fit a 1.85:1 ratio (in fact it might even be 2.35:1 Not only this but the archive footage seems to have come from someone’s old VHS collection and it looks dreadful. Even the extracts from some of the later films look like poor copies. I’m worried that younger audiences will look at these downgraded images and fail to appreciate not just Ken’s direction but the great cinematography of collaborators like Chris Menges and Barry Ackroyd. Menges is interviewed in the film but not Ackroyd – who helped establish the Loach style of social realism in the 1990s (as against the more naturalistic style of Menges’ work on Kes). The film does attempt to explore Loach’s work with actors and it does mention the Czech New Wave (to underpin Menges’ comments) but there is much more to the development of Loach’s approach than that one film movement. Some explanation of neo-realism and possibly some discussion of Robbie Ryan’s current work for Loach would help to dispel the view that Ken’s importance in British Cinema is just down to the subject matter of his films. There is a brief discussion of ‘Ken at Cannes’, but it would have been good to hear from some of his many European supporters why they are so passionate in support of his films.

My other moan is about what is becoming a modern documentary convention for ‘bio-docs’ – the shot of a location for no real reason except to break up the talking heads. Here we get shots of Blackpool Central Promenade because the Loach family went there for their annual one week holiday when Loach was a child – and because Thatcher made speeches there at the Tory Conference. Similarly we get aerial shots of Oxford, again from not very good footage.

Versus seems to me to be a rushed project made on a low budget that struggles to do full justice to its subject. I realise that documentarists have to select carefully and they can’t include everything, but in this film the choices could be better. I assume that they were made because of constraints. I do applaud the ‘pay what you can’ screenings that helped launch the film in cinemas and it’s true that the technical limitations of the image might be less visible on smaller screens, so I hope it does find some new audiences for Ken Loach’s work who will want to explore the films in more detail.

Here’s a clip from the film – one of the best parts in which Tony Garnett recalls first meeting Ken (note the cropped footage at the end):