The UGC Cine Cité multi-screen cinema in the centre of Lille.

France has the largest cinema market in Europe with annual audiences consistently above 200 million. Given that France and the UK have roughly the same population, the extra 30 million plus admissions in the former are worth exploring in terms of differences in exhibition structure and practice. On a simple level, France has more screens per head of population suggesting that French audiences have more choice and a shorter distance to travel, wherever they live, than their UK equivalents. It isn’t so much the number of screens, however, but the number of cinema sites.

My impression from these figures (and trips to different parts of France) is that more small cinemas have been retained in small towns in France. In larger towns/cities, existing buildings have been more carefully preserved and turned into small multi-screen venues. Multiplexes seem to have been built in France on out-of-town sites or in new shopping developments, but certainly not on the scale that this has happened in the UK.

The cinema built inside the old Chamber of Commerce building in Armentières first built in 1881.

This information display outside the cinema shows how the area was before 1914 with the same building in different use. 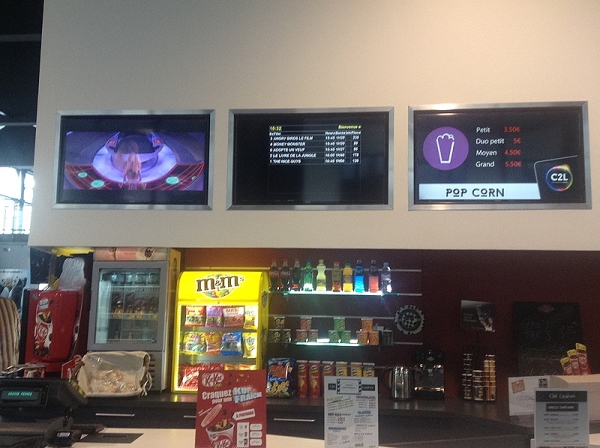 The cinema is now a multiplex showing popular French and American films on its five screens. Armentières is a small town in Picardy with a population of 25,000 within commuting distance of Lille centre.

The French system puts much greater emphasis on the ‘cinémas art et essai‘, the official designation of the French version of specialised cinema, with emphasis on the concept of art cinema. Each year there is a published list of ‘approved’ films and cinemas that screen these films are able to apply for the ‘art et essai‘ designation which enables them to receive public support. In 2015, 1159 cinemas received the designation (see http://www.art-et-essai.org/7/le-classement-des-salles). The total support came to €14.5 million euros. With 20% of cinema screens subsidised in this way, it’s no surprise that French audiences have easier access to cinema. I do note that the art et essai cinemas are not evenly spread. The figures suggest that the ‘Lille Region’ had only 48 such screens in 2015 while other regions such as Lyon and Bordeaux had over 200. Lille, France’s fourth city/urban region has only three cinemas in the city centre, all of which show a diverse range of films.

The real distinction between types of cinemas in France comes with the approach to dubbing. Given that American films had 52% of the market with French films at 35.5%, over 60% of films originated in a language other than French (CNC 2016) – the exact figure depends on how many ‘non-French’ films actually came from francophone countries and how the CNC (Centre national du cinéma et de l’image animée) defines a French film. France is one of the four largest European language groups that supports a professional dubbing industry. As in Italy, Germany and Spain (i.e. the FIGS group), all foreign language films can be dubbed into French. Cinema listings show these dubbed films as ‘VF’ (version française). Native French films are also described as VF. ‘VO’ is ‘version originale’ and usually means that the film is subtitled in French, so ‘VOST’ (version originale sous-titrée) or ‘VOSTF’. As the illustration here demonstrates, an out of town multiplex may dub everything not in French, but cinemas in the centre hoping to attract a cinephile audience will play non-French films as ‘VOST’. Children’s films that are not in French, especially animations, will however be dubbed everywhere (as they are in nearly every cinema market).

A peek through the glass doors of the UGC Ciné Cité in the morning.

Two of the Lille cinemas shown in the listings mag above (i.e. Majestic and Le Métropole) focus primarily on specialised titles but the UGC (see photo above) covers both specialised and mainstream, showing US blockbusters in both dubbed and VOSTF versions. The other two cinemas listed on this page are specialised cinemas for young audiences (L’univers) and for independent film/shorts/documentary (L’Hybride). I find the cinema offer in the centre of Lille to be more diverse than in UK cities of a similar size. I was struck by how comfortable and welcoming the foyer of the UGC seemed to be compared to the soul-destroying emptiness of my local Cineworld in Bradford.

Ciné Sémaphore is the art et essai cinema in the centre of the old city of Nîmes in Southern France which is currently seeking UNESCO World Heritage status. Nîmes has a population of around 146,000 yet it supports this six screen artplex plus a four-screen traditional cinema, Kinepolis ‘Forum’, also in the city centre, and a modern suburban Kinepolis multiplex with 12 screens. The Sémaphore is a cinephile’s dream. The six ‘salons’ come in different sizes and seat 654 in total. I visited one of the smallest (40 seats) and a slightly larger 90 seat screen. There is a pleasant café bar with a good selection of food and the ticket prices are a reasonable €7 (with a full array of the usual discounts). It produces an excellent monthly brochure which includes events for children, students and community groups. Later I discovered that the cinema is one of five owned by the arthouse distributor Haut et Court, having been bought last year – though it still has the feel of a locally-controlled cinema. I also learned that the Sémaphore (which has been open for 38 years) holds an annual ‘British Screen Festival’ in March each year, organised by volunteers – see this English language website.

Sémaphore Cinema, tucked away on a side street – but well worth discovering.

My experience watching two films in the Sémaphore mirrored my experience in similar cinemas in other parts of France. In the UK we are used to programmes, even in art cinemas, with up to 20 minutes or more of advertisements, trailers and cinema announcements. Increasingly these ‘preambles’ are shown with the houselights partly up (a horrible state of affairs that damages viewing conditions in otherwise good cinemas). As a result, many of us attempt to enter the auditorium at the last minute to avoid the ads. When we arrived a minute or two after the stated start time in the Sémaphore screen, we stumbled into pitch darkness. With difficulty we found the empty few rows at the front. The feature started almost immediately after just one trailer and proceeded in almost complete dark. What a relief after the compulsory bright ‘exit’ lights and seat guidance lights in UK cinemas. I’m not sure how French Health & Safety regulations work but French cinema operators would struggle in the UK. I think the French approach is to make the audience responsible  – i.e. to take their seats before the lights go down. 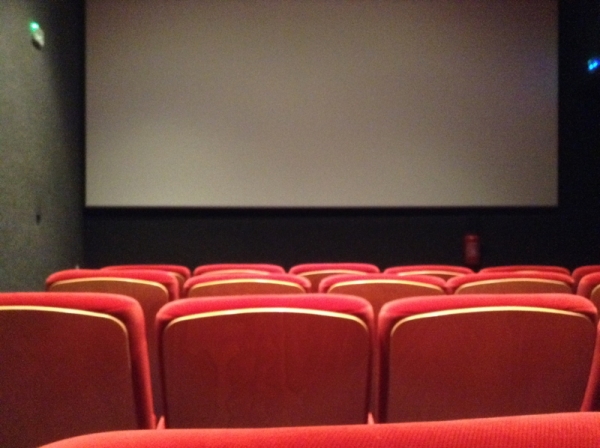 Sémaphore Salon 5 – comfortable seats, good-sized screen and a great image in the dark!