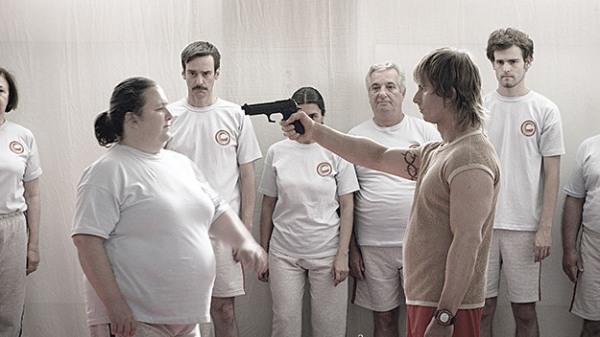 The recruits learn how to disarm a gunman

This film didn’t really work for me and I was surprised that it was selected for the Audience Award Competition. There were some good ideas behind the development of the project but they weren’t exploited effectively. Parabellum, as the title implies (transl. ‘prepare for war’), is about ways of tackling conflict and its aftermath. The film posits a world undergoing a never identified crisis manifest in random explosions as comets/bombs? fall from the skies and groups of people take advantage of the panic to start looting and rioting. There is only minimal dialogue as a random group of (presumably middle-class) people from the city is taken to a resort in the forest where we see them instructed in various forms of survival. Eventually they are deemed ready and those who have completed the training set off into the bush to ‘survive’. We don’t know what kind of ‘mission’ they might have been given.

The problem with the long training process is that it is so loosely edited with the inclusion of what seem like redundant or overlong shots that there is no tension or suspense, partly because it isn’t clear whether they are all expected to succeed. Is it a competition? We hear the training instructions but virtually nothing in the interactions between the recruits. When the ‘survivors’ finally get out into the river delta (which isn’t that far from Buenos Aires) things get a little weirder but not much. The trailer for the film includes some interesting images but it doesn’t convey the lacklustre appeal of the narrative. A posting on the film festival’s blog suggests all kinds of things about the film. Director Lukas Valenta Rinner and his collaborators Ana Godoy and Esteban Prado (who co-wrote the script) joined genuine Argentinian survival courses at the time of the 2012 ‘end of the world mania’. The lack of dialogue is a deliberate policy related to the experience of this preparation. The director was raised in Austria before moving to Argentina via Spain to study film and it seems that the film is inspired to some extent by the similarities between the Austrian middle-class and the Argentinian ‘upper middle-class’ (the director’s terms). If I’d read the blog before watching the film I might have been more disposed to support it, but at the end of a long day this film just didn’t grab me like the preceding four.