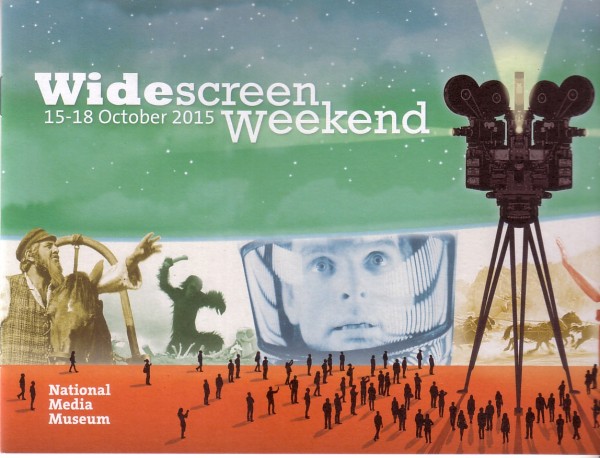 This event took place at the National Media Museum in the third weekend in October. As in previous years the event was extremely well attended. There was a programme of films and digital versions in CinemaScope, 70mm, Todd AO and Cinerama. Partly because I have to be careful where I sit at present [following an operation] I only made it across from Leeds on the Sunday. But the Festival was steaming along and friends filled me in on some of the goodies they had enjoyed.

What I did make was an illustrated talk by Pasquale Iannone on the ‘Widescreen Aesthetic’. He talked about the use of widescreen by film artists with a distinctive approach, including European directors and some US and UK directors. The latter included Richard Fleischer, Sam Fuller and Frank Tashlin.

However, his main focus was the European cinemas. So we had clips from The Ipcress File (Sidney J. Furie, 1965), Le Mépris (Jean-Luc Godard, 1963), La Dolce Vita (Federico Fellini, 1960) and Carnal Knowledge (Mike Nicholls, 1971). I assume he was using Blu-Ray sources, and the clips were pretty good visually: though The Ipcress File looked like the transfer was slightly fast and Le Mépris had poor definition.

However, the commentary and its illustration was excellent. There is clearly a very interesting study in the technical and stylistic usages of these filmmakers. This is CinemaScope practice which really exploits the format and provides interesting, and indeed at times challenging, visual imagery.

It would have been good to have an illustrative film in the programme. it may be that there were problems about availability, but one title, Jean-Luc Godard’s masterful Pierrot le Fou (1963), has been restored and is available. This is an aspect of the programming that I find a little limiting. The focus is very much on Hollywood, partly I assume because of the Festival’s constituency. However, only a couple of years ago we did have the very fine Goya – oder Der arge Weg der Erkenntnis (Konrad Wolf, 1973) from the DDR. And there are some very fine widescreen films from beyond the boundaries of the trans-Atlantic industries. One film which I think would be well worth viewing is the first Hindi film in CinemaScope, Kaagaz Ke Phool (Guru Dutt, 1959) with very fine black and white cinematography by V. K. Murthy. And the film has been restored and is now available in its original widescreen format.