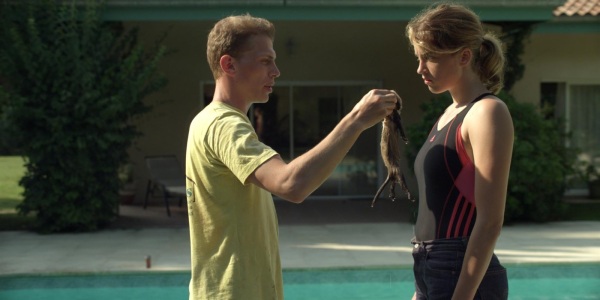 Arnaud has found a baby ferret that has fallen in Madeleine’s family’s swimming pool – what’s the best thing to do with it?

Half-watching the trailer for this film I thought it looked interesting. That’s an understatement. This is an original idea very well executed by Thomas Cailley, a young director making a feature début. He also co-wrote the film with a female partner, Claude Le Pape.

Arnaud (Kévin Azaïs) is a young man facing the future without a father who has recently died. At first he decides to join his brother in the family timber business but at the start of the summer he meets a rather scary young woman named Madeleine (Adèle Haenel). Arnaud’s first encounters with Madeleine are embarrassing and to some extent humiliating. But gradually a level of respect develops between the two. Madeleine has strong views – she thinks the whole world is facing extinction and she has begun to study survival techniques. Her goal is to join the ‘hardest’ regiment in the French Army but she must first go on a two-week training camp before she enlists. Arnaud eventually decides that he should join her.

This film is difficult to categorise and perhaps the most useful description is a ‘romance drama with comedic elements’. It all takes place in Aquitaine, the region in South-West France including the coastal resort where Madeleine and Arnaud live and the forests where the army ‘survival training’ is conducted – and where forest fires are common. Reading some of the reviews, it’s not surprising that Adèle Haenel as Madeleine gets the most coverage and she is indeed remarkable (I realised that I saw her first in Céline Sciamma’s Water Lilies (France 2007)). But I think that Arnaud is in some ways the more interesting character, even if he is to some extent the ‘straight man’ to Madeleine’s wilder activities. The only failing in the film for me was to not explain his background. She, we know, has quit a Master’s degree but what has he been doing before this summer? At first gauche with typical ‘loser’ friends, he shows himself to be sensitive, intelligent and mature in the way he faces events. 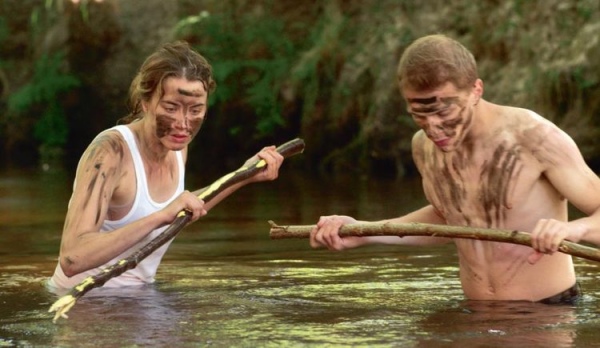 Madeleine gets her wish to test her survival skills.

There is a particularly po-faced review of the film on the Slant Magazine website and in her Sight and Sound review Ginette Vincendeau describes the film as “engaging, quirky but slight”. But for me this is one of the best film debuts I’ve seen for a while. It deserves to be seen widely and as Vincendeau points out it has been both a critical and commercial hit in France (winning two prizes in the Director’s Fortnight at Cannes 2014 as well as three Césars in 2015) . One of its strengths is the ending which eschews the usual romcom conclusion. The film is also interesting in directly referencing the recession and the poor prospects for young people. As Arnaud notes at one point, the French Army is second only to McDonald’s as the biggest recruiter of young people in France.

In the second part of the film the conventions of the army training/boot camp narrative come into play but again the reactions of the two central characters are perhaps not what we expect. Finally the film draws on the repertoire of ‘survival’ narratives, including those of TV personalities such as Bear Grylls – a source quoted by Cailley in a Sight and Sound (July 2015) interview.

I think that Les Combattants is a youth picture that I’d very much like to use with students for several reasons – the unconventional characters, the recession setting and the location outside Paris (one of the by-products of the French funding system which encourages young auteurs like Cailley, a Fémis graduate, to shoot in different regions.) I hope teachers might find it on DVD – it’s released on August 10th. Confusingly the film is discussed under two different English titles – the terrible Love at First Fight and the direct translation, The Fighters.