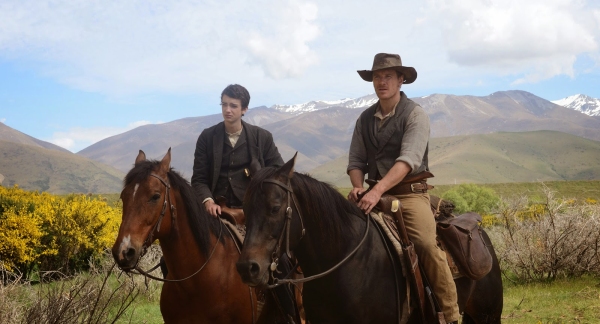 A great composition and seemingly generic. But not quite the Rockies?

Slow West is beautiful to look at. It includes several stunning set pieces and it is well-researched and carefully prepared – but I couldn’t help feeling that it didn’t quite produce the coherent narrative I was hoping for. Perhaps the main issue is whether or not this is ‘a Western’? There has been plenty of critical weight behind Slow West including a piece on the ’10 Great Modern Westerns’ by the BFI and the implication that Slow West belongs in such company.

John Maclean was previously a musician in The Beta Band and he directed the band’s videos. One of these was seen by Michael Fassbender and eventually Fassbender appeared in two short films which both won prizes for Maclean. Slow West, written and directed by Maclean is his first feature. Maclean’s parents are both well-known visual artists and he studied painting at Edinburgh College of Art. It’s not surprising then that there are some wonderful compositions in Slow West. With the highly talented Robbie Ryan as cinematographer, Maclean is also served by a marvellous use of natural light. There are several scenes in the film I would like study in detail once it is available on DVD.

The film’s story involves a quest by a teenage Scots boy Jay (played by the gangling Australian actor Kodi Smit-McPhee) searching for the girl he loves whose family has been ‘cleared’ from the Highlands. He believes she now lives in Colorado with her father. (Jay claims to be the son of ‘Lady Cavendish’.) At the start of the film’s narrative we meet Jay in a forest clearing in the first of many dangerous encounters. He’s rescued by Silas (Michael Fassbender), an experienced but clearly suspect ‘drifter’ (the character repeatedly refers to ‘drifting’ and Eastwood’s High Plains Drifter may be a reference). The rest of the narrative takes the pair through a series of other similar encounters until it reaches the inevitable climax. Maclean also uses flashbacks and dreams experienced by Jay and voiceovers offering forms of narration by Silas. Maclean’s musical background means that there is an appropriate score composed by Jed Kurzel, the Australian musician who also scored The Babadook, plus a campfire song written by Maclean himself.

Apart from a few scenes in Scotland, most of the film was shot in New Zealand. Many critics have suggested that the setting could easily be the Rockies and that audiences won’t notice. I’m not sure about this. It seems to me that the story could have taken place in New Zealand anyway and still allowed Maclean to make all of the points he wants to make (i.e. about racism, colonialism, violence etc.) – ‘Westerns’ have often been set outside North America. It’s certainly the case that everything in the film could be an element in the repertoire of the Western. Maclean has done his research and he is aware that until recently Westerns were more mythological than realist. He wants to emphasise the various European migrant groups in the American West in the late 19th century, the ‘real’ Native Americans etc. – though I’m not sure about the three musicians from Francophone Africa (French imperialism in Central and West Africa was mostly later than 1870). According to this Guardian online piece by Rowan Righelato, Maclean himself has described his film as “an existential European road movie”. That seems a pretty good description for the overall ‘form’ of the film. It seems to me that although all the Western elements are ‘authentic’ they don’t all fit together either as a realist historical drama or as a traditional Western genre film. I’d be interested to see what academic scholars of the American West make of the film. Reviewers seem to refer to the setting as ‘1870’ but if this information was conveyed in the film (perhaps a date in a newspaper?) I missed it. It is clearly ‘post’ Civil War but some of the incidents suggest earlier or later periods – and different locations. 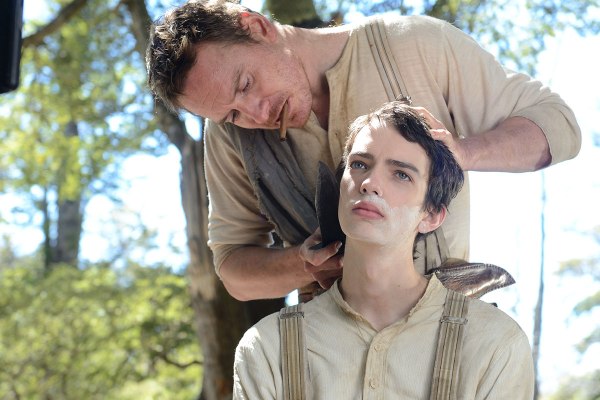 Does all of this matter? Probably not or probably only if, like me, you are expecting a Western. The Western was once the American genre par excellence and whatever the ostensible narrative intentions, Westerns always conveyed something about American myths and changing ideologies as well as broad statements about the history of the frontier. Even the revisionist Westerns of the late 1960s and 1970s conveyed something, perhaps more than before, in their discourses about the end of the West and the corporatisation of Western activities. I’m not sure that Slow West tells us anything apart from its fairly universal story about a young man’s dream and an older man’s survival instinct. That’s not necessarily a bad thing and in this case Maclean’s film is entertaining and its relatively brief running time (84 minutes) is packed with sounds and images to stimulate. Nick, my viewing companion did also question whether the script did enough to establish the relationship between the two central characters, citing the shaving scene. Are we meant to think of a surrogate father/son relationship? Michael Fassbender will attract many audiences to the film and he gives a strong performance, but I wonder if in this case his star persona is too powerful for the overall balance of the film, especially with his cigar-chomping flashing smile?

Reading through the reviews and audience comments I think that Slow West is being enjoyed in much the same way as the Coen Bros. films – and enjoyed in terms of its dark humour and intelligence.

On a technical note, Robbie Ryan’s images are presented in the old European ‘widescreen’ ratio of 1.66:1. I’m not sure why and because I saw the film in a real cinema with proper tabs and masking I didn’t really notice. But it looks great.

A short clip from the opening sequence in the film: