The three friends first take a taxi (from left, Benito, Emiliano and Augustin)

I knew this film was going to work from the first few minutes of the opening scene. Four men in their late 70s or older are sat round a table in a café-bar playing dominoes and squabbling. Suddenly one orders 5 shots of tequila. Consternation amongst the other three since none of them drink any more. The drinker explains that they are all for him and that he is ‘out’ – he has colon cancer and he hasn’t got long. He then makes the other three promise that they will deliver his most prized possession to its final resting place when he is gone. This object is a paper napkin on which are written the lyrics to a new song by the famous singer José Alfredo Jiménez. The lyrics are dedicated to the dying man and signed by the singer. This is indeed a historical document that is dated and in the handwriting of the star. The three survivors are charged with taking this sacred object to the museum in Dolores Hidalgo where the singer is buried – a trip of over 250 kilometres from Mexico City. That doesn’t sound very far, but these are old men with very little money.

The ‘three amigos’ are great performers, each very different, and I knew I would enjoy their company. The film was briefly introduced by Yossy Zagha Kababie, co-writer and producer (and brother of the director) who featured in a Q&A after the screening. He confirmed that all four of the old men are experienced performers from TV, theatre and film – some primarily working in comedy sketches or telenovelas but others as character actors. One of them, José Carlos Ruiz (Emiliano) has appeared in Hollywood films including Peckinpah’s Major Dundee (1965). Luis Bayardo (Augustin) reminded me at times of Stan Laurel with a quizzical expression and a general air of innocence. 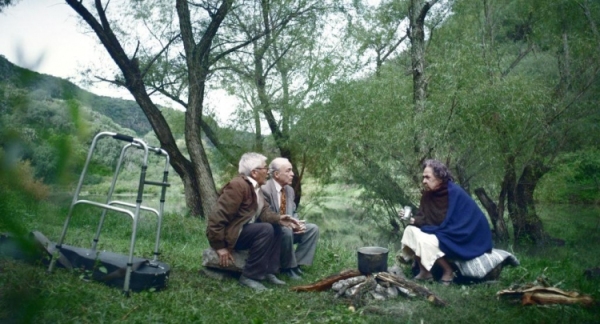 Augustin and Emiliano meet a village ‘witch’ on the journey.

The plot develops a road movie with a clever script that finds numerous ways of delaying the trio on their journey so that it takes several days for just one of them to reach Dolores Hidalgo and deliver the napkin. (UK readers will possibly remember a similar trip in Last Orders, UK 2001, a Fred Schepisi film based on a Graham Swift novel.) Each of the three men who start the trip has a family issue to deal with. One is a widower being forced into a nursing home by his daughter-in-law, one has a wife with dementia and one is constantly finding the ghost of his dead wife popping up and criticising him. These are universal problems for men of a certain age but the appearance of the ghost also refers us to the ways in which the film tries to connect with Mexican culture and the nostalgia for the trio in thinking about the Mexico of their youth. One of the men ‘sees’ a white horse on a couple of occasions – a reference (Yossy told us) to one of  the 1,000 songs written by Jiminéz. The men also meet a ‘witch’ and survive a dangerous premonition that involves another ghost. As one of the audience questions highlighted, the role of women in the film is quite interesting in this film about four men – the women have quite small parts but they are often characters with real ‘agency’ – assertive, organised and ‘active’. Yossy agreed that the script had tried hard to achieve this.

Yossy Zagha Kababie responds to a question from Andy Willis

This is a genuinely funny film with laughs aplenty but also a social commentary and a moving drama. It’s a major achievement. In answering questions during a lively Q&A conducted by Andy Willis, Yossy Zagha Kababie made many revealing statements. He explained that there is a big growth in film production in Mexico, but small films (this cost just US$1.5 million) find it difficult to get screened in Mexico despite the box office boom in admissions (Mexico now rates as the fifth biggest film market in cinema admissions). Most cinemas screen American films and the 100,000 admissions for this film is a sign of success in a difficult market. He argued that as a producer with his brother they aimed to make films about Mexican culture that weren’t about drugs gangs. Comedy is popular in Mexico but mainly ‘simple’ comedy and not the character stuff as in this film. Comedy is also a harder sell to international film festival programmers. So, it’s difficult but worthwhile work that the filmmakers enjoy. The focus on music and the town of Dolores Hidalgo – one of Mexico’s official ‘Magic Towns’ with a historical role in the struggle for Independence – is part of this ‘reclaiming of Mexican culture’. I think any festival would benefit from including this film and I just wish a distribution deal was possible in Europe – it seems that a Mexican comedy like this doesn’t even travel to other Spanish language markets elsewhere in Latin America, but the Hispanic market in the US may be a taker of both DVD and TV rights? If you stumble across this film, take the plunge and you’ll have a great time.