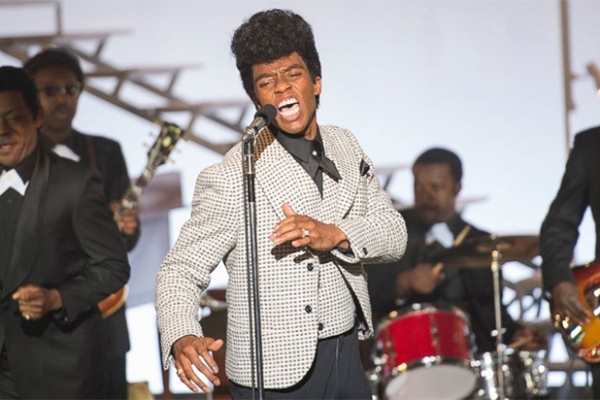 Chadwick Boseman as James Brown early in his career

I don’t really understand why biopics – and especially music biopics – get such a rough ride from reviewers. Get On Up was the latest offering from my local Film Club and I went along because I actually like biopics and because I like to support African-American cinema. The only thing I could remember about the film’s November 2014 release in the UK was that it was a wide release which didn’t get much support at the box office. I suspect that the poor response was associated with a general lack of interest in African-American culture in the UK. Although major stars such as Denzel Washington or Will Smith are well supported this tends to be only when they feature in mainstream white films.

Get On Up, as the title suggests, is a biopic focusing on James Brown, an artist of supreme importance in the history of Black music but possibly not well known to an audience under 40. Brown had a complicated life and his music developed in complex ways over his life. This long film (139 mins) gives a fair overview using a slightly unconventional approach but is forced to make compromises, thus missing out or only briefly touching on aspects of the star’s life.

The highlight of the film is undoubtedly the astonishing performance of Chadwick Boseman as the adult James Brown. It’s one of those ‘impersonation’ performances and the film should have won awards for the hair stylists. Boseman does sing in the film but mainly mimes to live recordings by Brown. He certainly manages to perform convincing moves on stage (convincing to me with only limited memories of James Brown) despite being much taller. Boseman earlier played baseball star Jackie Robinson in 42 (US 2013).

The slightly unconventional approach involves a non-linear narrative in which the action moves between past and ‘present’ in what sometimes seem random ways. Added to this Boseman/Brown occasionally approaches the camera and addresses the viewer. I think that sometimes these switches of time are connected to Brown’s motivations in connecting his disturbed childhood with issues that arise in his career. Overall, the narrative structure appears to be built out of short groups of scenes (sometimes signalled by titles associated with songs or names given to Brown such as ‘Godfather of Soul’ – with an accompanying date and location). The overall effect is a bit more like a music documentary structure than a conventional drama. I suspect that there are more ‘performances’ than usual even in a music biopic.

At this point I should say that I do like James Brown’s music and the film did remind me of what an important figure he was (I recognised most of the songs). I enjoyed the moments when there was discussion of the music itself – how it was changing – but these were too few and too short. My other concern was about the history of James Brown’s relationship with African-American culture. Again there were some interesting sequences, including a surreal appearance on a Frankie Avalon Christmas Show when a relatively young James Brown and the Famous Flames, dressed in Andy Williams style cardigans, are cavorting for a completely white TV studio audience. There are a handful of similar sequences in which Brown’s ‘blackness’ and his social role come to the fore but not as much as I had hoped for and expected. It was only later that I learned that the screenplay was written by the British Butterworth brothers, Jez and John-Henry and that the Rolling Stones (who are featured in a 1964 show) were Executive Producers (Mick Jagger has a producer credit). The film was directed by Tate Taylor, best known for The Help (2011) and two of the stars of that film, Viola Davis and Octavia Spencer, appear as Brown’s mother and aunt respectively. At some point I think Spike Lee was attached to the project and it would be interesting to find out how he might have approached the film differently.

I think that this film is most likely to be compared to Ray (US 2004), a much more commercially successful film that also won more critical plaudits. I suspect that Ray’s music – which had more crossover appeal – might have been a factor and the inclusion of more obviously dramatic sequences. I think though that two films directed by African-American women (rather than white men) are also worth considering. One is Cadillac Records (US 2008) about the Chess record company and its roster of blues and soul stars and directed by Darnell Martin. The other is Talk to Me (US 2007), a biopic of a radio DJ (Don Cheadle) wonderfully directed by Kasi Lemmons. There is a parallel scene in Talk to Me and Get on Up, focusing on the night after Martin Luther King’s assassination.  The smart move would have been to recruit Lemmons, a vastly underrated director, to helm the male music biopics.

Despite my quibbles I enjoyed Get on Up and I should mention a good supporting turn by Dan Aykroyd as Brown’s manager Ben Bart. Here’s a short trailer: