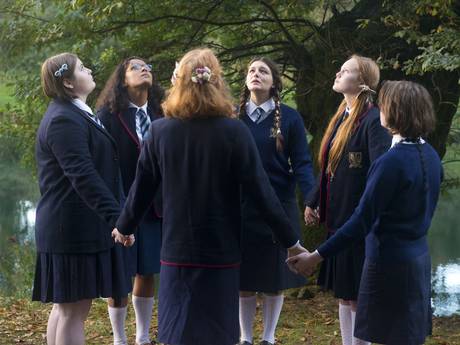 I recommend going to see this film even though I was ultimately disappointed by it and there’s plenty of spoilers following so beware.

A film about females is a rare event in our Oedipal-riddled world and so The Falling immediately has novelty going for it; it is written and directed by Carol Morley and brilliantly shot by Agnes Godard. It draws upon a true story of fainting girls in a school in the late 1960s; nothing was found to be wrong with them. I experienced similar ‘fits’ in my first year of teaching when up to three lasses would keel over in the middle of my English class. Being male I didn’t attribute this to my teaching.

Morley indirectly diagnoses their complaint to be patriarchy; of course it didn’t need the late ’60s setting for females to be suffering from that disease however things were worse then. It focuses on the friendship between Abbie (newcomer Florence Pugh) and Lydia (Maisie Williams familiar from Game of Thrones); the former’s sexual experiences unsettle their relationship. They are at a girls’ school full of repression, exemplified by Greta Scacchi’s Miss Mantel; a great piece of casting as Scacchi was known for libidinous roles earlier in her career. The acting is fabulous throughout the film.

Morley’s previous feature was the effective dramadoc Dreams of a Life (UK-Ireland 2011) which recreated the life of a woman whose body was found years after it had expired in a London flat. The Falling is extremely ambitious and there is so much to like: its obtuse take on nature, the brooding tree and autumnal pond; the inclusion of rapidly edited ‘subliminal’ montages that might be flashbacks; the male voice of the therapist questioning the girls is mixed  to feel as though it’s emanating from your own head (emphasising the hegemony of patriarchy); Maxine Peake, who plays Lydia’s mother, barely has a line but conveys pent-up frustration with the quivering fag in her fingers. All this is brilliant but . . .

For me it didn’t hang together. It could be the film needs a second viewing but I think the incest was pointless and detracted from the representation of repressed females through sensationalism and pathologising the protagonist. I’ve tagged the film as horror though it’s certainly not conventionally horrific; it’s only toward the end the genre makes its presence felt. It might have been better if horror iconography had been introduced earlier. Incidentally, the credit sequence at the end is terrifically designed.

As I said, it is a film that needs seeing because it deals with female experience and too many of western narratives (and those of other cultures) assume the male experience is paramount. Hopefully Morley will get to make another film soon; too many of our great female directors (Lynne Ramsay and Andrea Arnold for example) struggle to get their films made. Maybe in the next one Morley will be able to more successfully integrate form and content. If this sounds critical then I am being unfair as it is far from shameful to ‘fail’ (if that’s what she has done) when aiming so high. I’m interested in what female viewers make of the film . . .