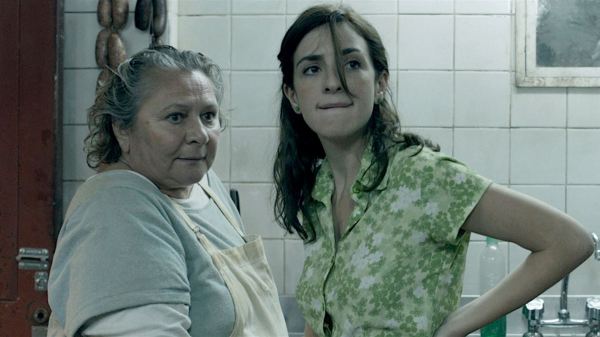 The cook and the waitress in a small café are aware that their sole customer is a powerful man they despise . . .

Nominated for the Palme d’or and Argentina’s Oscar entry as well as receiving many other nominations and awards globally, Wild Tales has had an extensive release in the UK. Does it live up to this star billing? Did I laugh? Does the film have anything to say? Well, ‘perhaps’, ‘yes’ and yes, but . . . This is what is sometimes described as an ‘anthology’ or ‘portmanteau’ film. There are several different variations of this form. In this case there are six tales by the same director. I’m not sure that they are all ‘wild’. They do all involve forms of violence, some much bloodier than others. There is also a loose theme of ‘getting even’. It’s inevitable that with six films some will work better than others. I think I’d score this as 4 out of 6 with the first two the weakest.

In some of the stories the ‘getting even’ is directly related to social class distinctions and it’s always good to see the ‘little person’ get one over the bourgeoisie. But here that doesn’t always happen and a couple of the stories are driven by a relentless logic in which individuals are gradually worn down. In the end, the only thing that links all of the films is the sense of Argentinian society as being riven by all kinds of anti-social behaviour or clear injustices. I suspect that there were some nuances I didn’t get and that for Argentinian audiences the tales are more clearly linked together than I realised.

Some of the events depicted have a delicious black humour, others are more tragic. The film does, I think, invite audiences to indulge in assumptions about national characteristics. Male characters are arrogant and macho, some women are beautiful and haughty. And their opposites seem to be there to create the conflict – so the unattractive woman defeats the powerful man etc. The one star I recognised was the almost ubiquitous Ricardo Darin who appears as the ‘little man’ brought low by bureaucracy. But he’s an explosive expert . . . The tale that worked the best for me concerned a hit and run driver. This is in some ways a universal tale of wealth and corruption with a shock ending. I won’t spoil the enjoyment of any of the other tales but the film has been lucky/unlucky that the first tale relates directly to a recent news story and some cinemas have warned customers who might have found the link distasteful.

I think that my reluctance to embrace the film as completely as others have done is down to my general lack of interest in short narratives over longer ones. There are several other portmanteau films discussed on this blog. 7 Days in Havana is a less consistent film than Wild Tales but it does offer short films in different styles by different directors and in the end I personally found that more interesting. On the other hand, Yesterday, Today and Tomorrow offers three different stories by the same director which together say something about a particular society. The writer-director of Wild Tales, Damián Szifrón, does a good job in presenting the narratives but I didn’t notice anything particularly different in terms of style between the six separate stories (other than their generic roots). In some ways his film appears more like Hollywood anthology films than the European tradition of portmanteau films.

I did enjoy Wild Tales and I would recommend it as a film from one of the most vibrant film industries. My main concern is why it was so highly promoted where other foreign language films of similar quality are often restricted to a limited distribution. Violence and comedy are deemed to be saleable as a combination I guess – and the film is co-produced by the Almodóvars, Augustín and Pedro. Almodóvar is still a name that means something to UK audiences.