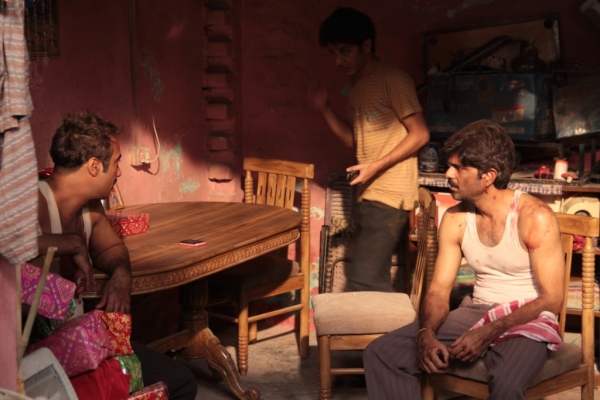 Titli is another important film in the gradual emergence of an ‘Independent Indian Cinema’. It represented the new strain of Indian cinema at Cannes this year and is still waiting for a release in India after festival screenings around the world. I was excited to see the film at the Leeds Festival – but disappointed in my quick scan of the audience around me by the absence of the local South Asian audience. We struggle to see Indian independents in UK cinemas and often they appear fleetingly in arthouse rather than multiplex cinemas. Titli is a debut (fiction feature) directorial outing for Kanu Behl, a graduate of the Satyajit Ray Film Institute in Kolkata. He himself is Punjabi and in the 1990s he grew up in Delhi with his parents – both actors, writers and directors. In 2007 he began an association with film festival workshops and Titli has been developed as part of a NFDC (National Film Development Corporation) Screenwriters’ Laboratory. Behl worked with Dibakar Banerjee on Oye Lucky!, Lucky Oye! in 2008 and Banerjee is the producer on Titli, making the film the first part of a partnership between his own production company and the mainstream production house Yash Raj Films – best known for Bollywood spectaculars. Banerjee is one of the leading figures in ‘Independent Hindi Cinema’ and took his place alongside Anurag Kashyap as a director on the compendium film project Bombay Talkies.

‘Titli’ means ‘Butterfly’ in Hindi and as a name for the lead character in the film, the youngest of three brothers, it is one of the reasons why he is teased and treated as naive. But Titli has plans to escape his all male family in a Delhi colony. While his elderly father (played by the director’s father) stays in the background, his two older brothers run a racket based on violent car-jackings in conjunction with a corrupt local police chief. Played by newcomer Shashank Arora, Titli is physically weaker, but, we suspect, a little brighter, than his brothers. The eldest brother Vikram, played by Ranvir Shorey (a comic actor in the other performances I’ve seen) is a terrifying brute here with the actor having piled on extra flab. Titli wants to escape and the rest of the family want enough capital to start a legitimate ‘cover’ business. But when the latest car-jacking goes wrong, losing everyone’s cash, Titli is chosen to be the means of recovery – by marrying him off to a young woman who could also be used in the family ‘business’. But the chosen bride (a suspiciously pretty young woman from a seemingly more established family) has plans of her own and she and Titli share a desire to escape. That’s enough spoilers. The script is well thought through and with good performances all round and lively camerawork, Titli is very successful. I’ve seen festival reviews which refer to violence ‘off-screen’ but I found that what was ‘on-screen’ was quite violent enough. I think that the preferred term for characters like Vikram is ‘a goon’ and he uses a hammer as a weapon of choice. This kind of violence is mainstream in India so I clench my teeth and sometimes close my eyes. 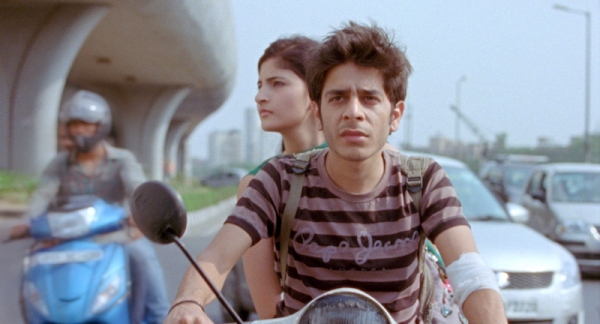 Titli on his scooter with his wife Neelu (Shivani Raghuvanshi)

I want to recommend Omar’s review of the film on his new blog at Movie Mahal. He suggests that Titli marries the crime film and the traditional Hindi family melodrama – but of course here removes the mother figure. The new wife comes into an entirely masculine home (which production designers made even more claustrophobic by altering the rooms in the ‘on location’ dwelling). The second woman who exerts some external control over the family is Vikram’s divorced wife who demands her dues and causes further financial pressure. As well as this mixing of genres, Omar also notes the possible mixing of filming styles with elements of neo-realism feeding into the action sequences. I’ve seen references to improvised dialogue for many scenes and also the suggestion that the film was shot on 16mm to achieve a grittier feel. Neo-realism does move a narrative forward on the basis of simple but devastating problems associated with lack of money but what is important in Titli is perhaps that Titli the character is something of a fantasist/dreamer and that he has to recognise that he needs to become more realistic in his ambitions. His fantasies are based on the latest scam to involve India’s urban growth – the control of parking franchises in the new tower blocks seemingly rising everywhere in Delhi.

Films like Titli are conventional in the Western sense, i.e. they are recognisable as generic mixes which don’t utilise the specific conventions of the Bollywood (or Tamil/Telugu) masala film. There are no dance routines or ‘item girls’ but otherwise they are associated with the mainstream. I hope that the UK distribution arms of Yash Raj, Studio 18, UTV and Eros can get them into UK cinemas on a more consistent basis.