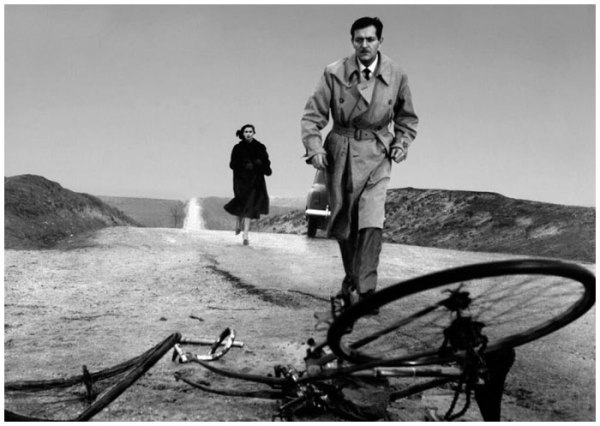 The opening scene of the film, illustrating the use of deep-focus as Juan reaches the accident before the reluctant María.

Muerte de un ciclista features in the short retrospective of films by Luis García Berlanga and Juan Antonio Bardem offered at the 28th Leeds International Film Festival. Unfortunately this title appeared to be projected from an American DVD, but even so its status as an important film produced in Spain under the Franco regime was not in doubt.

The screening was introduced (sorry, I missed the speaker’s name – anybody know?) and we were told about Bardem’s difficulties with censorship. Apparently the censors refused his original ending but Bardem tried the strategy of offering multiple choices for an alternative ending, gambling perhaps that the censors would be hoist with their own petard. I’m still thinking about how the final version actually works in terms of ideological struggle. 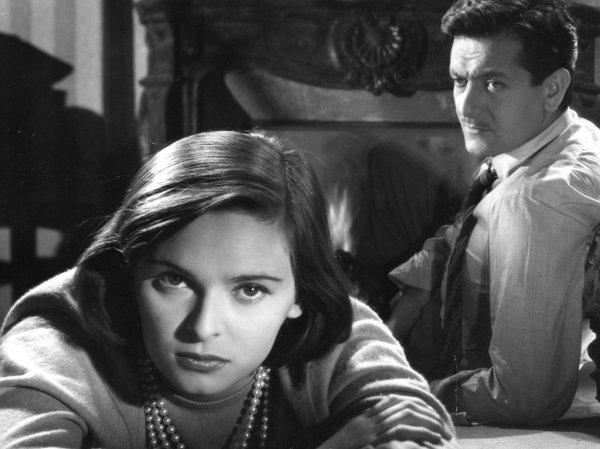 María (Lucia Bosè) and Juan (Alberto Closas) as the lovers.

The film has been discussed as relating to various styles and genres. I was surprised by the extent to which I began to see it as a film noir. Partly I think it is because of the strong performance of Lucia Bosè as a convincing femme fatale – albeit seemingly weak, but in practice deadly in her selfishness. Bosè, though still only 24, was a former Miss Italy and already a star, but was about to move to Spain to marry the leading matador Luis Miguel Dominguín. She has great erotic appeal in the film despite some of the unflattering early 1950s fashions. Her early successes were in neo-realist films and these offer another starting point for classifying Muerte de un ciclista.

The film begins with the incident that provides the title. Lucia Bosè is María, a wealthy married woman driving her lover Juan (Alberto Closas) back from a tryst when her car hits a cyclist on an open road. Juan wants to try to save the dying man, but María hurries him away fearing exposure. The man does indeed die and the lovers realise that they are going to have to live with the fear of exposure. This fear is heightened by the local celebrity gossip who suggests he knows something about María but won’t say what it is. She must try to find out what he knows and Juan goes into the working-class quarters of Madrid attempting to find out if the dead man’s family know anything following the police investigation of the death.

The introduction to the film pointed out that 1955 in Spain was marked by student protests in the universities (and by a meeting of filmmakers at Salamanca University) and such scenes occur in this film since Juan is a junior university teacher – a post he has because his brother-in-law is the university dean. What follows the opening accident is a narrative structured something like a neo-realist film. In an attempt to prevent their guilt becoming known, Juan and María undergo several ‘trials’ and humiliations – much like Antonio in Bicycle Thieves. In the process we learn more about the couple (though mostly more about Juan, primarily a ‘good man’ who has been a moral coward). The real question is what exactly was Bardem trying to say? How did he think his film would be seen as oppositional? Did he win his game of cat and mouse with the censor?

One argument is that the film is mainly concerned with exposing the lack of conscience of the middle classes and the ways in which they can easily ignore the sufferings of the poor – as well as the criticisms of the young. Bardem emphasise this by juxtaposing very different styles, e.g. the neo-realism of Juan’s visit to the home of the cyclist and the expressionist camerawork and low key lighting of scenes in night clubs and when Juan and María meet. Bardem had attended the first Spanish film school started in 1947. This was where he met Berlanga. Bardem was also self-taught in terms of his knowledge of Soviet Cinema and this is evident in one startling cut when the drunken gossiper throws a bottle at wedding and the edit reveals a broken window at the university where Juan is in trouble. The melodrama of Juan’s downfall is heightened by the symbolic shattered glass through which we see him.

Juan’s conscience and his ‘re-discovery’ of himself is at the heart of the narrative. He seems ill at ease with how his life has worked out but also thinks he has disappointed his mother – an important figure in the Spanish wealthy classes. There is a problem with some of the aspects of Juan’s story. He implies that he and María were teenage lovers during the war, but Lucia Bosè is far too young to be a thirty-plus María in 1955 (even if the ‘war’ is defined as including the fascists’ campaign against Republican guerillas that continued after 1939). I’m slightly puzzled by Juan and how Bardem uses him as the protagonist. He seems to be a weak man, easily led by María but not a fascist hero. The argument is that he is in some ways a ‘traitor’ to the class cause because he allows his conscience to trouble him! I’m also surprised the censors allowed the extensive footage of student protest. Overall, I didn’t get the same sense of a clear satire or anti-fascist allegory that I’ve found in the work of Carlos Saura. Rob Stone in his 2002 book on Spanish Cinema (Longman) suggests that Bardem’s juxtaposition of styles stripped away the sentimentality of neo-realism and allowed it to strengthen the impact of the melodrama (which in a Hollywood film would be purely ‘personal’ in its use of moral or social problems but which here points to the moral bankruptcy of a social class)(pp 48-9). Stone also points towards the use of deep focus (a feature of the long shot/long take approach in Rossellini’s neo-realist films) which enables Bardem to focus on Juan, but also to show the world around him – a world suffering under the impact of fascism.

I guess this discussion of melodrama points us towards Sirk and Fassbinder and their uses of melodrama as a means of subversion. I think I’d need another viewing to fully take on board Stone’s argument but I was certainly impressed by the melodrama/noir that is Muerte de un ciclista.

A detailed analysis of the film by Marsha Kinder (which expands Stone’s analysis) is available on the Criterion website.