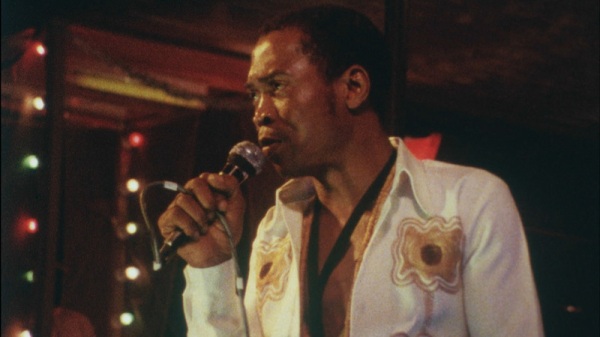 My initial response to this film was to query why I had forgotten so much of what happened in the 1970s and 1980s – and then wonder whether I had ever known about it in the first place. The latter seems unlikely since Fela Kuti, the subject of this documentary, was a prominent figure in both music and political struggle in Nigeria during the 1970s and 1980s. When I got home I discovered some of his music in my collection. I think perhaps I was more interested in Francophone African music or South African jazz at the time – in which case this film was instructive but also left me wanting more.

Fela Kunti was born into a middle class Yoruba family in 1938. His mother was a significant figure in the Nigerian struggle against British colonialism and his father became a prominent educationalist. His elder brothers trained as doctors but Fela turned to music, abandoning Trinity College in London and discovering jazz. He arrived back in now independent Nigeria in the early 1960s after developing his skills in high-life music in Ghana. From then on he developed his own style later dubbed ‘Afrobeat’ and his Afrika Shrine club in Lagos became a focal point for music fans and also for dissent in the face of oppression by the succession of military leaders in Nigeria – some of whom were well-known to Fela and his family.

Finding Fela is a documentary by the suspiciously prolific Alex Gibney who appears to produce two or three high profile documentary films each year. This one runs to 120 mins – which is both a tad long for my taste but also not long enough to explore all the potential stories crammed into Fela’s relatively short life (he died in 1997). (By African standards it was, of course, a relatively long life and the fact that he died of AIDS seems symbolic in some way.)

Gibney’s approach is to hang his story on the preparations for and extracts from the Broadway musical Fela! first seen ‘Off Broadway’ in 2008 as written by Bill T. Jones and  Jim Lewis. We are taken by Jones through the difficult decisions about how to stage the show and how to deal with Fela’s music and his lyrics – which basically recount his activities and what he made of their impact. Intercut with this is a chronology represented via archive footage and interviews with those closest to Fela, including his children, manager, band colleagues and prominent fans. There are also several interviews with Fela Kuti himself so he is able to speak to us directly.

The more I reflect on the experience of watching the film, the more frustrated I feel. The film is well made and its narrative flows easily so that I was never bored – but none of the stories were developed as much as I wanted. More on high-life and how it became Afrobeat would have been good. More background on the family and the politics of Nigeria in the 1960s and 1970s would also have been good – but couldn’t have been achieved in a single feature. Gibney’s use of the Broadway musical and Fela’s American contacts gives the whole film an American or perhaps African-American feel. This is interesting, especially given the recent developments in links between Nigerian filmmakers and the diaspora audiences in the US. However, the film’s commentary offers the audience two assertions/observations that are more intriguing. One raises the comparison with Bob Marley – is Fela Kuti a similar figure as a ‘Third World Superstar’? Why is he more difficult for an American audience to understand? The second assertion is that Fela Kuti is second only to Nelson Mandela as an icon of popular resistance in Africa during the 1980s. I’m not sure about either of these observations but I am intrigued that my memory is that music from Francophone West Africa and from South Africa/Zimbabwe made more impact with me than the Nigerian/Ghanaian variety. Why? Fela Kuti sang in English for much of the time. Was he more likely to look towards the US? The documentary quotes his reactions to the racism he experienced in London in the late 1950s and how later he ‘re-learned’ African history after reading Malcolm X and Marcus Garvey, writings introduced to him by American contacts. Again, I would have liked more on this.

Gibney has made his name with documentaries that focus on ‘fallen’ men (most recently Lance Armstrong) and Fela Kuti’s later career saw him increasingly interested in forms of African culture that eventually found him involved with a Ghanaian magician of doubtful repute. He was also criticised because of his approach to his marriage and his sexual adventures. This is covered in the latter stages of the film but I’m not sure about the way in which the transition from ‘heroic’ to ‘lost’ is handled in the film. There were a couple of clips from Channel 4 in the UK (Black on Black and a Muriel Grey interview) that weren’t properly captioned and that makes me think that this documentary was rushed. Overall, the view of Fela Kuti presented seems superficial, somehow less than the sum of the different parts of the film. I wonder what a filmmaker with more understanding of West African culture might have produced with the same access to the archives and personnel presented here. I suspect that they might not have used quite so much footage of the Broadway show and might have dug a bit deeper into the Nigerian experience.

The official US trailer: