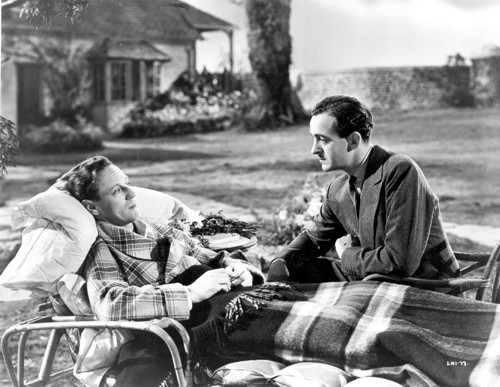 Earlier this year I posted on Miyazaki Hayao’s anime The Wind Rises. BBC2 recently transmitted the British equivalent film to Miyazaki’s hymn to the designer of the Mitsubishi Zero fighter plane. The First of the Few celebrates the work of the aero designer R. J. Mitchell whose designs included the prize-winning Supermarine S5 and S6 floatplanes, winners of the Schneider trophy in the 1920s, and then the single most important fighter of the Second World War, the Spitfire which first flew in 1936.

The First of the Few has several similarities with The Wind Rises. Both designers are inspired by the flight of birds, both are obsessed with their work, both visit Germany – and admire the Italian love of high speed planes. Both have important relationships with understanding women that end tragically. But there is also a major difference in that the British film began shooting in 1941 and was completed in 1942 just two years after the ‘Battle of Britain’ (the title is taken from Churchill’s speech about the debt owed to the fighter pilots who flew the Spitfires – and in larger numbers the Hurricane). It was therefore produced in the context of the war effort and has been described as ‘propaganda’. I’m not sure that is the most useful term. The film doesn’t work crudely to ‘persuade’ its audience – it assumes that the audience understands the aims of the war effort. Nevertheless it doesn’t refrain from milking the emotional response to a British success story which was crucial in 1942 when the outcome of the war was still in doubt. German and Italian figures in the 1920s and 1930s are shown as sometimes comical characters, though like the Powell & Pressburger films of the period, some Germans are shown sympathetically (e.g. the airmen of the the Great War in the Richthofen Club).

The wartime context allowed the producers to get the active support of the RAF and Vickers Supermarine. Mitchell was played by Leslie Howard who also directed the film. Howard was a major star who tragically died, shot down by the Luftwaffe on a civilian flight, in 1943. The other ‘marquee’ name in the film was David Niven who was released by Sam Goldwyn in exchange for the US rights to the film. Unfortunately Goldwyn decided to rename the film Spitfire in North America and to cut around 35 minutes from the 123 minutes UK running time (supposedly because as the test pilot, Niven didn’t appear throughout the film). There is a great deal of background on the film’s production on the website of ‘South Central Media’ (i.e. the locations around Southampton) and also on this Leslie Howard appreciation blog.

The Leslie Howard website (see above) reveals that the story and script of the film went through several processes to end up with the final version in which the development of Mitchell’s ideas to eventually produce the Spitfire is told in flashback to a group of young pilots by the Niven character Crisp, now a Station Commander during the Battle of Britain. The film begins with one of those familiar wartime montages introducing the threat of invasion (though it seems bizarre that the British audience of the time would have needed such an intro – this may have been deemed necessary to introduce the story to an American audience). It ends with a quasi mystical image of a Spitfire flying into the sun as seen by Niven, now up in a Spitfire himself. These last few shots seem to prefigure the Powell and Pressburger films A Canterbury Tale (1944) and A Matter of Life and Death (1946). In the first of these a flying hawk from a medieval Canterbury noble is transformed into a Spitfire flying over Kentish fields – an iconic image as many writers have noted. In A Matter of Life and Death, Niven is again an RAF officer, this time caught between life and death and quoting Andrew Marvel as his Lancaster bomber crashes into the sea on its return from a bombing raid.

Howard plays his role very well and portrays Mitchell as a sympathetic character. He and the test pilot (Niven) are solidly middle-class, supposedly from the same school with Mitchell as introspective and Crisp as outgoing. In reality Mitchell was a working-class lad from Staffordshire, imposing and athletic with a temper. It’s interesting to conjecture how different the film might have been if made in 1944 or 1945 when working-class characters were starting to appear in lead roles as the country prepared for a Labour government. In the 1930s, most British leading actors were middle-class (or played as such) and in 1942 Howard and Niven certainly sold the film to audiences. But by 1945 someone like Eric Portman might have played Mitchell ‘for real’. Although a biopic of sorts (but only covering Mitchell’s later life), a great deal about the story of The First of the Few has been changed – the trip to Germany for instance never happened – with focus on the Spitfire presented at the expense of Mitchell’s other work. One aspect of the film that does represent the realism of documentary however is the brief montage of the craftsmen at Vickers working to produce the parts for the first prototype Spitfire. Watching the film now is to be reminded how much has been lost in the UK with the neglect of engineering in the last 40 years. The other ‘documentary’ feature of the film is of course the appearance of ‘real’ RAF pilots, some of whom had fought in the Battle of Britain themselves. There seems to be a suggestion in the writing about the film that the focus on the young pilots (many of whom were lost in aerial combat) and the pre-war struggles to get the Spitfire built meant that the film had a very different tone to that expected by Goldwyn. There are relatively few combat scenes and there is an emphasis on how only Mitchell’s brilliance saved the UK in 1940. If this is propaganda it is of the ‘warning to future generations’ kind. In fact the RAF were seeking a fighter like this from the early 1930s onwards. The First of the Few is also a romantic picture in which the shy Mitchell seemingly dies from overwork in completing his design. In reality a very successful top designer suffered from cancer which killed him aged 42. Just as tragic but perhaps not as romantic.