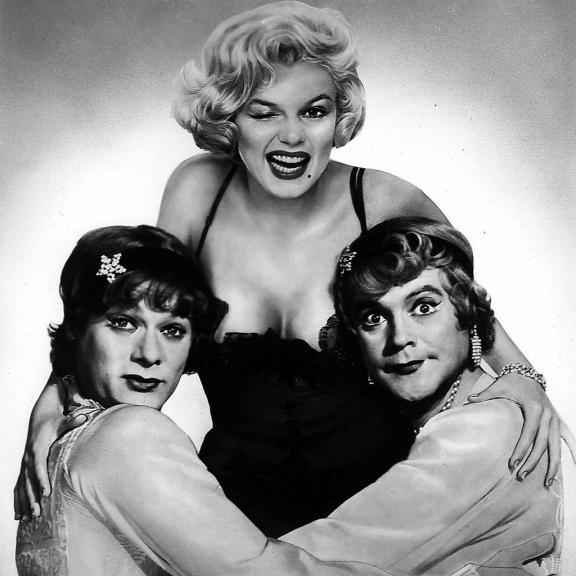 Curtis, Monroe and Lemmon in a promo still (from: http://prettycleverfilms.com/movie-lists/10-things-about-some-like-it-hot)

This Park Circus re-release is currently showing at BFI Southbank. My younger viewing companion said she enjoyed the film and was glad to have been able to see Monroe on the big screen. At the end of the film a sizeable chunk of the audience applauded.

I have seen the film at least twice before but I followed it quite happily. I came to a number of conclusions. Monroe is remarkable. How much the camera loves her – and she responds (even though it is now suggested that she was a nightmare to work with). It occurs to me that Monroe, possibly alongside Paul Newman, was the last of the Golden Age mega stars to emerge and make a significant group of films in the dying studio system. On the other hand, good though her performances on screen turned out to be (whatever pain and blood she generated for directors), Monroe’s star persona also depended on her early pin-up work and later celebrity ‘appearances’. She put as much into the ‘secondary circulation’ of her star image as some of the later ‘celebrity stars’. Those Eve Arnold photos are also important.

But actually, the real stars of the film are Tony Curtis and Jack Lemmon. I can’t split them, though I think that Curtis has sometimes been under-rated as an actor. His early career included a lot of studio fluff alongside the real deal in Sweet Smell of Success (1957) and The Defiant Ones (1958). By contrast Jack Lemmon had a critical success in 1955 with Mr Roberts and sustained a remarkable career for the next forty years. Lemmon appeared many times for Billy Wilder and developed a reputation for working well with his leading ladies, starting with Judy Holliday in It Should Happen to You in 1954. Lemmon was a consummate comic actor and he and Curtis perform as if they had always been a double act.

The script by I.A.L. Diamond and Billy Wilder is the other star ingredient. I was intrigued to discover that Wilder was ‘inspired’ (and presumably borrowed quite a lot from a German cross-dressing comedy – see the plot summary for Fanfaren der Liebe (West Germany 1951). This reminds me of the later Hollywood remake of a German film from the 1920s that was also made in French and remade in the UK in 1935 and then became Victor Victoria as directed by Blake Edwards in 1982. Clearly cross-dressing has universal appeal. Wilder’s treatment of sex and violence was radical for Hollywood at the time. The sex tends to mirror Monroe’s approach, earthy and sensual, but somehow childlike and innocent at the same time. The violence is more interesting in the sense that Wilder doesn’t shy away from the bloodshed in the St Valentine’s Day massacre scene. Wilder was also ahead of the game in his approach to the intertextual. He deliberately re-created the Warner Bros look from The Roaring Twenties (Warners 1939) and cast the iconic figures of George Raft and Pat O’Brien who played the gangster and cop in various Warners films. James Cagney versus O’Brien would have been even more ‘authentic’ but Cagney would have changed the tone of the film I think. Mike Mazurki is a reference to the slightly later era of the film noir/’hardboiled’ stories of the 1940s such as Farewell My Lovely. I don’t think the script is perfect. For instance, much of the potential for comic business around the workings of the all-female band led by ‘Sweet Sue’ is simply thrown away in the last third as the narrative focuses resolutely on the two ‘romances’. Still the dialogue is so witty and the pace unrelenting so that there is no time to think about the plot and its potential holes.

I hope the film does well on this re-release and encourages more comedies from this era. Some of Jack Lemmon’s other work needs to be seen again and some more Monroes are always welcome.