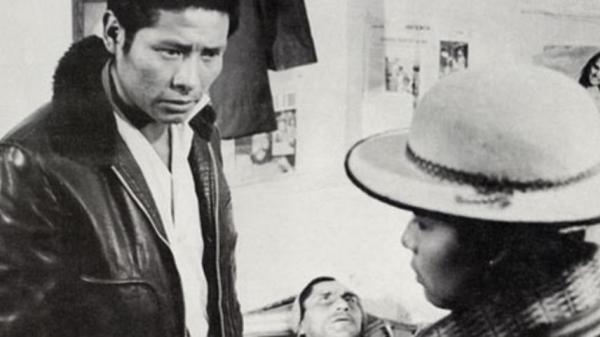 The 1960s were a decade of revolution; not least in cinema. Jorge Sanjines’ (as part of the Ukamau collective) The Blood of the Condor – he co-wrote and directed – is one of those rare films: it actually had a direct social impact as it led to the American backed Peace Corps being expelled from Bolivia. It was also a significant contribution to Third Cinema, an attempt to make films about the Third World in a non-western way.

Sanjines’ film was about, and for, the peasant Indians of Bolivia and was designed to be watched, and discussed in, communities without cinemas. Hence Sanjines thought he could afford to have a complex narrative structure, which interpolates flashbacks with the present quest of blood needed to save the village leader, Ignacio. Those who presented the movie could explain what was happening and so avoid any confusion amongst the peasants who were not used to complex film language. Despite this, the peasants weren’t sure about what was happening and Sanjines didn’t repeat such narrative complexity again. He realised that he’d fallen into the trap of imposing an unsuitable form upon the group he was trying to help.

Ignacio is initially presented as a drunkard, wife-beater, angry that she hasn’t produced more children. Hardly the way a western film is likely to present a heroic figure. After the credit sequence, which states the film includes the peasants of Kaata, Ignacio, and a few others, are marched away and shot by men under orders of the local police chief. Paulina, Ignacio’s wife, gets her husband to his brother, Sixto, in the city; however, in order to save him they must find blood or money to pay for a transfusion. The film then intercuts why Igancio was shot with Sixto’s quest for blood and money.

We discover that the Progress Corps, a thinly disguised Peace Corps, are actually sterilizing the Indian women, when performing operations, without permission; an attempt at genocide. When Ignacio finds out he declares that the same will be done to the Americans. Although Ignacio is a fictional character, and it appears the Sanjines was using sterilisation as a metaphor for the destruction of indigenous culture, the Bolivian government, after trying to ban the film under pressure from the Americans, eventually expelled the Corps.

Although Sanjines, and his collective, ‘failed’ formally with their narrative structure, they did succeed, in other formal ways, in communicating in a non western way. For example, the use of the long shot to emphasise the collective aspect of village life rather than the individualism of the close up. Given the Ukamau group’s academic training, it isn’t surprising that they too had been inculcated in the western way of filmmaking. Another way, apart from the subject matter, Blood of the Condor was undoubtedly revolutionary is in its ‘call for action’; as Sanjines stated:

“The work of revolutionary cinema must not limit itself to denouncing, or to the appeal for reflection; it must be a summons for action.” (quoted in Gabriel’s Third Cinema in the Third World: The Aesthetics of Liberation, incidentally this seminal book is available here).

The final shot of the film is of upraised rifles, which are freeze-framed; an undoubted call to arms against the imperialist aggressors. These are not just identified as the Americans, middle class Bolivians too, the descendants of colonialists, are in Sanjines’ sights as they define themselves against the Other of the Indians so they can feel more like the First World westerners. At one point, Sixto is forced to wait at a country club in the hope he will be given blood for his brother; however, the doctor is too full of his own importance to be bothered with Indians.

In 2005 Evo Morales was elected President of Bolivia, the first indigenous person to gain such elevated office in Bolivia. It would be nice to think that films of  Third Cinema sowed the seeds for such advancement. However, as the multinational corporations, and hedge funds, extend their tentacles everywhere they can screw some profit, maybe it’s time for a Fourth Cinema. This would take on the values of Third Cinema and use them to hold up a mirror to the whole capitalist world so we can see how economic and ecological disaster is on our doorstep.

PS the whole film is available, subtitled in English, on YouTube. It looks like a videotape TV recording but the quality’s fine.

21st July: the post was updated to correct the statement that the Peace Corps did actually sterilise Indians.