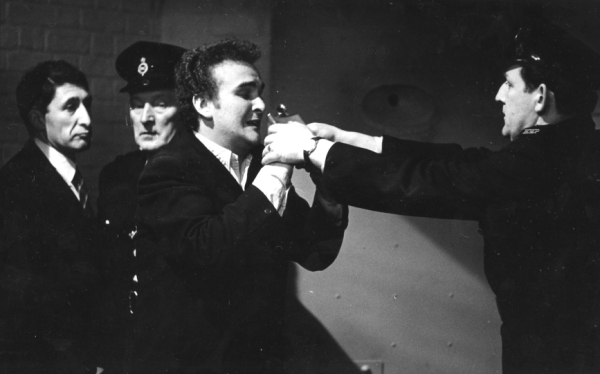 In 1965 Ken Loach began working on ‘The Wednesday Play’ for BBC Television. These feature-length films, initially shot on video in studios but gradually moving into 16mm film production, attracted audiences of over 10 million. Many of them dealt directly with contemporary social issues, often creating headlines in the press the following day. Three Clear Sundays is a drama about capital punishment – the title refers to the statutory period between sentence and execution in which an appeal for a reprieve could be made. This was a live debate in the UK at the time – the death penalty for capital murder (death by hanging) was commuted to life imprisonment later in the same year, 1965. The last executions had actually taken place in 1964.

The script was written by an ex-con James O’Connor. It tells the story of Danny Lee (Tony Selby) a London street trader (‘barrow boy’) who is sentenced to 6 months in Pentonville for punching a police officer (who had provoked him). Danny is illiterate and not very bright. He is the only ‘straight’ member of a criminal family headed by Brittie (Rita Webb) and he has ignored her 11th commandment “Thou shalt never plead guilty”. In prison he is easily led and eventually finds himself involved in a scheme which requires him to cosh a prison officer. He hits the man too hard and discovers that killing a prison officer is one of six capital murder offences.

Over the course of 1965 BBC production teams experimented further with the mix of film and video and Ken Loach emerged as one of the prominent figures in the development of ‘documentary dramas’ utilising film footage. How much of this actually came from Ken himself and how much from his collaborators is not clear. In April 1965 he was working with producer James MacTaggart and story editor Roger Smith. Three Clear Sundays has three ‘filmed’ sequences depicting the barrow boys in the market, Brittie outside the Old Bailey and outside the prison gates. These are relatively static scenes – like the studio sequences. A prison-based drama doesn’t give many opportunities to show the city environment. The key aesthetic decision perhaps concerns the use of music, an important feature of two later Loach plays in the same year (and of Loach’s work over his whole career). Danny’s story is told from different perspectives (e.g. his mother and his girlfriend) and each ‘chapter’ is introduced by a song. All the lyrics are written by Nemone Lethbridge and set to some familiar folk tunes. Loach uses a technique in this play which involves presenting characters speaking but with the songs dubbed over the speech. I wonder if this was related in any way to Godard’s deliberate mismatching of sound and image in his early 1960s films? (In the Graham Fuller interviews (1998) Loach says that he rarely saw British or American films as a teenager, being more interested in theatre and once at university saw mainly European films.)

Not surprisingly perhaps, the Lee family are portrayed as  ‘cockney characters’ and the girlfriend Rosa is Irish. The Irish connection might come from O’Connor the writer. Rosa and Danny are both Roman Catholic. There is also a West Indian character in prison and others in the street scenes. There is a palpable sense of trying to ‘root’ the drama in a recognisable London, but aesthetically it isn’t quite there yet. The social commentary is certainly there with references to both racism and homophobia in the script. Overall the play now appears ‘rough and ready’ and seems best categorised as still ‘experimental’. The closing scenes in the condemned man’s cell are very moving and the social chatter of the hangman and his assistant is quite startling. Years before Pulp Fiction, their chatter about the techniques of the job (where to place a knot in the noose etc.) alongside sleeping arrangements and tales about the Nuremburg trials in 1945-6 are effective in making executions ‘real’. I’m not sure whether or not Loach would have seen Berlanga’s The Executioner which screened at Venice in 1963 but that film takes a similarly prosaic view of executions (as well as satirising the system).

Loach would later be accused of being didactic but Three Clear Sundays works well because Danny is clearly ‘guilty’ but in no way ‘deserves to die’ –the story may well be ‘loaded’ in this sense but the presentation is ‘straight’. There is no evidence that the play greatly influenced audiences (public opinion in the UK seems to have been unchanged throughout the 1960s) but it must have had an impact. Unfortunately, none of Loach’s interviewers seemed to have asked him about this play (please comment if you know of any other interviews).

Presumably Loach and the cast and crew had little time to make these plays. Loach directed six such plays of 75-80 mins each all of which appeared in 1965. Three Clear Sundays is the earliest example of Loach’s work available on the DVD boxset ‘Ken Loach at the BBC’.