BIFF 2014 or the ’20th edition’ opened with The Lunchbox, the perfect choice. Festival co-director Neil Young told us that just a few hours earlier the film had won two major prizes at the annual Asian Film Awards organised by the Hong Kong International Film Festival. Irrfan Khan won best actor and writer-director Ritesh Batra won for his screenplay (for his first feature film). This announcement chimed with the opening statements by BIFF’s other director Tom Vincent who told us that this festival programme had been conceived as an international event, that it would bring the world to Bradford – and showcase Bradford for the world. I reflected on my experience 24 hours earlier standing on Keighley Railway Station and watching yet another film/tv shoot taking place over on the Keighley and Worth Valley Railway platform with extras in Edwardian costumes waving off a vintage steam train. Keighley is just one of the regular locations for film shoots in Bradford Metropolitan District that have helped to contribute to Bradford’s status as UNESCO City of Film. 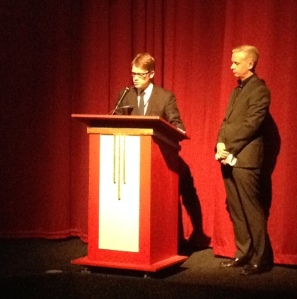 The Lunchbox builds a form of epistolary love story around the “one in a million” chance that one of the daily lunch deliveries in Bombay (from home to office by the city’s dabbawallahs) goes wrong. The mismatched couple, the woman who makes the food and the man who eventually eats it, start a relationship through notes passed in the tiffin tins. I’m going to write about The Lunchbox in detail when it gets its UK release in a fortnight. I need time to think about it and also to watch it again. I think it should do well in the UK and I hope that it matches the $4 million take in France – but that’s a tall order given the chronic state of UK film culture. Whatever happens in the UK, The Lunchbox has been a hit in India and abroad and it has got many people, not least Irrfan Khan himself, talking about what the film means for Indian cinema in the way it has been financed and produced as well as in the treatment of the story. Why, for instance, is it necessary to find co-production partners in France and Germany to get an Indian film seen abroad by general audiences – i.e. outside the South Asian diaspora? The commercial success of the film in India has made this question more pertinent than it would have been if it was only a critical success at overseas festivals.

There were moments when The Lunchbox didn’t seem like an Indian film at all – but then a host of local cultural references flooded in forcing me to reconsider. This is indeed a ‘local’ Indian film and a global film and as such the perfect start to Bradford’s international festival.