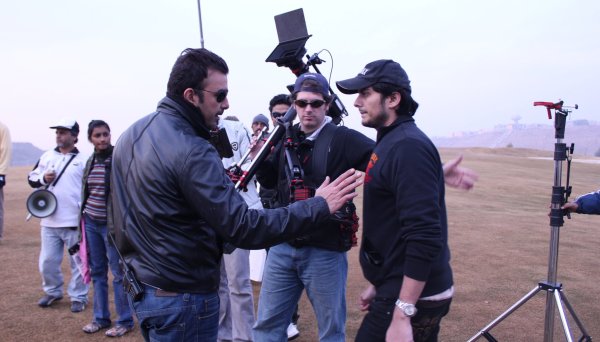 On the shoot for WAAR, lead actor Shaan Shahid is on the left and director Bilal Lashari on the right.

I was looking for a foreign language film and this Pakistani film looked like it would fit the bill. I was surprised to discover that half the dialogue is actually in English (impeccable English as taught in the best schools in the country) and half in Urdu – not subtitled. All the recent Hindi and Tamil films I’ve seen in UK multiplexes have been subtitled in English and Waar seemed like a throwback to an earlier era. In terms of the technical quality of the production however this is a very modern film.

I went into the screening knowing only that the film was an action thriller based on ‘actual events’ involving the fight against terrorism in Pakistan. It was only afterwards that I learned that it had the biggest budget of any Pakistani film so far and that it was a box office smash in its domestic market after an Eid release in October 2013. I also read about the controversy generated by its seeming propaganda message about terrorism coming out of India.

The narrative of Waar has a familiar structure found in action thrillers from most film cultures. A ‘super agent’ Major Mujtaba (Shaan Shahid) comes out of retirement to take on a job that may well be ‘patriotic’ – to stop an international terrorist whose mission appears to be to cause havoc in Pakistan – but is also in some way ‘personal’. Was the terrorist also responsible for an attack on Mujtaba’s family? The ex-army Mujtaba is asked to join two younger agents from a special police squad, a brother (Hamza Ali Abbasi) and sister (she’s the IT expert and is played by Ayesha Khan). The terrorist ‘Ramal’ is played by Shamoon Abbasi and his ‘fixer’ (named ‘Laxmi’) by Meesha Shafi. I can’t really comment on the script by Hassan Waqas Rana since I couldn’t follow the scenes in Urdu. I should explain that all the military and police operational dialogue is in English (as is the conversation between the terrorist and his fixer) but all other dialogue is in Urdu and not subtitled. I’m at a loss as to what went on between the ‘commissioner’ of the terrorists attacks (who is hinted to be Indian) and a group of Islamist fighters up on the North West Frontier. Since the Taliban and the Indian armed forces are Pakistan’s two main potential enemies the connection makes sense but it would be good to know how the liaison is supposed to work.

The credits announce that a digital intermediate was processed by Technicolor in Bangkok and reports suggest a high number of VFX. IMDB states that a Red ONE camera was used and that the ratio was 2.35:1 – I thought that the presentation in Bradford was more like 1.85:1 (though the trailer below is 2.35:1). There is a colossal amount of weaponry on show and this seems to have been provided by the Pakistani military – fuelling the claims that the film is a propaganda statement. The young director Bilal Lashari trained at a film school in San Francisco and before this feature had mainly worked on music videos. The direction is accomplished in a technical sense but for me was portentous in terms of low and high angles with fast cutting matched to a heavy rock soundtrack (which was not to my taste at all). Lashari has said that he rarely watches Bollywood and that he is much more influenced by Hollywood. I can see that in his direction and I did feel that James Bond/Jason Bourne etc. were major influences – the film’s climax takes place on the roof of the convention centre in Islamabad. However, I felt that several of the actors, especially Shamoon Abbasi, could easily have fitted into a similarly-themed Hindi action thriller. Ironically the cinema played the trailer for Jai Ho with Salman Khan in the intermission and there was a distinct resemblance to Abbasi. Waar also features a musical interlude in which Ramal and Laxmi dance together – to a track with an English vocal.

Overall, I can’t say that I enjoyed the film but certain elements are distinctly impressive in terms of the choreography of the action (and the originality of the actions), including the sequence involving an audacious attack on a police academy (based on events at the Lahore Police Academy in 2009?). The central performances are good but I got bored with the explosions and almost fetishistic handling of weaponry. The lack of subtitles was annoying and I note that the director and producers have spoken about the decision to shoot half the film in English, suggesting that this was a mistake.  I don’t really understand why the whole film isn’t in Urdu with just occasional English – a convention in many similar language cinemas – and English subtitles. A sequel has already been announced so perhaps a different policy will be adopted the second time around. Waar has been seen as reviving a Pakistani film industry in decline. A country of 180 million people with a rich cultural tradition needs a functioning film industry so that must be a good thing. I just hope that the industry will be able to make a variety of films in future.