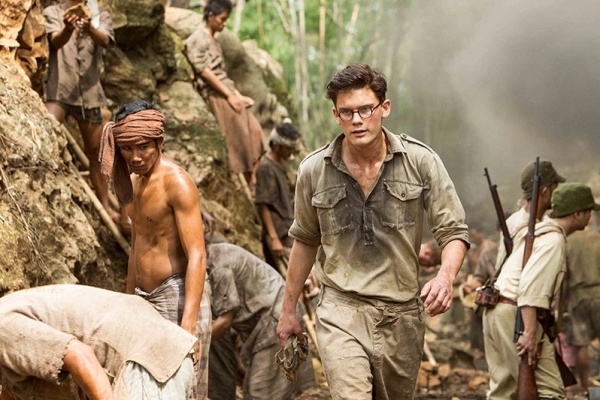 The young Eric Lomax (Jeremy Irvine) when he first arrives at the railway camp.

The Railway Man is a decent film and rather better than I thought it might be. For some reason I got the impression from the trailer and the poster that there would be CGI war scenes and the like. If anything, the film suffers from the opposite – an attempt to use the ‘authenticity’ of the typical British realist drama including railway scenes that the real Eric Lomax would probably have winced at (wrong locos, rolling stock, stations etc.). But I’m not going to go on about that. The two reactions to the film have been either warm appreciation and enjoyment or dismissal as conventional/’soft’ etc. I think the former is more reasonable.

Eric Lomax was a young Royal Signals officer captured by Japanese forces at Singapore in 1942. The terrible irony was that this young railway enthusiast was sent to become part of the slave labour force building the ‘Death Railway’ from Siam into Burma to provide the Imperial Japanese Army with a supply route for their proposed invasion of India. Lomax was taken to be an engineer and was therefore slightly better off than the soldiers who became labourers. However, he crossed the Japanese camp leaders and was brutally tortured. Though he survived the ordeal, he developed post-traumatic stress, a condition not fully recognised in post-war Britain and it was not until 35 years after his release and marriage to Patti, a woman he met on a train, that he is able to return to the railway in contemporary Thailand – there to meet his torturer.

The Railway Man is an Australian-UK co-production. There is useful background material on the production on the film’s official website, but it’s still not clear to me why it became an Australian film after the initial script work by Frank Cottrell Boyce in the UK, over several years, based on Eric Lomax’s own book. (Australian troops were captured at Singapore and the liberators of the camps in 1945 were Australians, as shown in the film.) The film also has a huge budget by British standards ($26million is the estimate on IMDB – I’m not sure if that is US or Australian dollars, but it’s still large). I’m guessing that Nicole Kidman as Patti was part of the deal to promote the film. I’m afraid that she felt miscast for me as I didn’t believe in her as the character as constructed by the narrative. She nevertheless performs the role with skill and she looks lovely even in the dowdiest of clothes (by all accounts the real Patti claimed never to have been as dowdy.) The budget went on location work in Scotland, then Thailand and then finally in Australia for studio sets and construction of the camp. 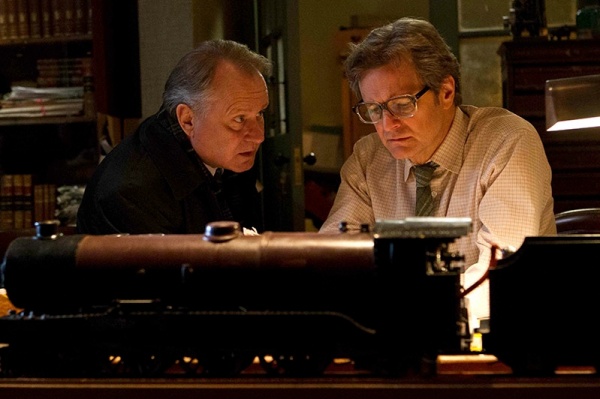 The older Lomax (Colin Firth) with Finlay (Stellan Skarsgard) one of the other survivors of the camp.

I’ve see a number of reviews from what I assume to be younger writers who simply don’t ‘get’ the film. They don’t understand why Patti’s role is important and they don’t really understand the experience of the POWs in Burma. (I should point out that the film is not totally ‘truthful’ to the facts of Eric’s life – but Patti is clearly important in triggering events.) It occurred to me that there have been films about the trauma of being captured by the Japanese in Malaya at regular intervals in the UK since soon after the war ended. One that I haven’t seen mentioned elsewhere is Mine Own Executioner (UK 1947), an adaptation of a Nigel Balchin novel that features a psychiatrist in a difficult marriage who has been a POW himself and then finds himself asked to treat another POW who is clearly suffering from post-traumatic stress caused by his experiences in Malaya/Burma. Later films included Hammer’s Camp on Blood Island (UK 1958) and the relationship drama Merry Christmas Mr Lawrence directed by Oshima Nagisa (UK/Japan 1983). Oshima reminds me that I did think about The Burmese Harp (Japan 1956) at the end of The Railway Man. In Kon Ichikawa’s film we get a very different sense of the Japanese soldiers who have to come to terms with the end of the war but on reflection some of that is in the meeting between Eric Lomax and the figure of his nightmares played by Sanada Hiroyuki. I found these scenes very moving. I think you could argue that The Railway Man is a true ‘anti-war film’. We realise that along with the terrible loss of so many lives, Eric has had his life ruined and his opportunities for fulfilment closed off because of the (understandable) hatred he felt towards Japan and the Japanese. In a parallel universe, Eric Lomax would have travelled to Japan and marvelled at the diversity of Japanese rail networks. 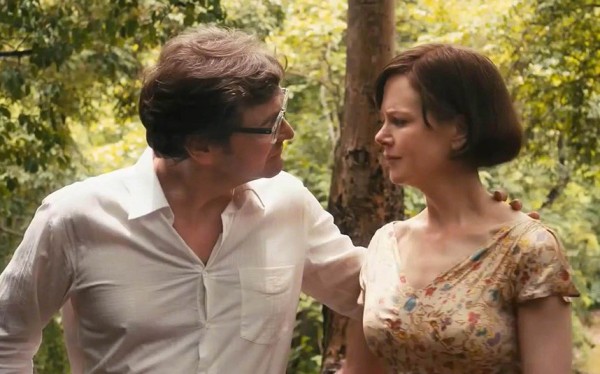 My other gripe is with the reviewers who dismiss the ending of this film. One states that though the ending conforms to what actually happens, it doesn’t work as cinema – as if a film must end in a certain way. These reviewers appear to have been force-fed Hollywood screenwriting handbooks and that is not a good practice. Films can end in lots of different ways, all of which can be effective in different circumstances. The story of The Railway Man is relatively well-known because of the book and documentary treatments. Many audiences want to ‘experience’ the story on the big screen – they don’t want it changed to conform to Hollywood conventions.

On a technical level, The Railway Man feels accomplished and restrained. Frank Cottrell Boyce is of course an experienced and celebrated scriptwriter but Australian director Jonathan Teplitzky gets more exposure in the international film market than he has had before. Perhaps the issue about the film is that it feels old-fashioned, like a film that might have been made in the 1970s and 1980s. That hasn’t stopped it being a hit with older audiences. My hope is that its box office success in the UK will attract younger audiences who might be introduced to this history and who might understand a little more about post-traumatic stress. Perhaps it will contribute to the general discussion about the impact of war on the lives of ordinary people that the whole emphasis during 2014 on the centenary of the First World War should bring. Come to think about it, the thousands of young soldiers abandoned by the poorly prepared authorities in colonial Singapore have something in common with the troops sent out to be slaughtered in 1914.