What a pleasure it is to watch a film by a great director. This film by Abbas Kiarostami takes its title from a classic Jimmy van Huesen/Johnny Burke song and it has only a rudimentary plot, beginning and ending seemingly in the middle of something. Yet the simple events of the narrative, involving no more than seven speaking parts, are presented in such a way that concentration never lapses and the mundane appears extraordinary. The plot involves Akiko, a young woman from ‘out of town’ attending university in Tokyo and working as an escort/bar girl in the evenings. She should be meeting her grandmother who has come to the city for the day, but she should also be revising for an exam. She tries to put off her boss who wants her to visit a client – a man he ‘respects’. The boss is insistent, so she will have to go. 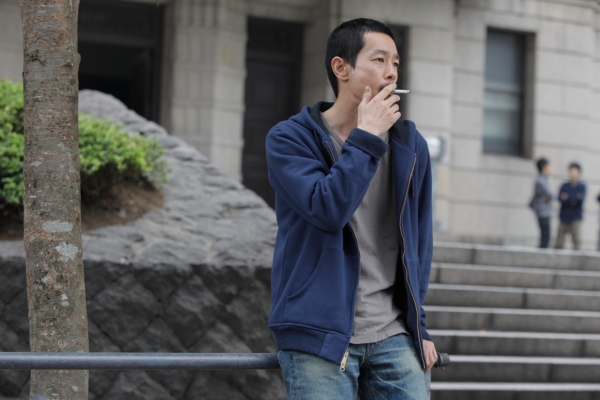 Kase Ryo as Noriaki, the fiancé

The whole narrative covers less than 24 hours and most of that time is taken up by conversations, recorded messages, phone calls etc. featuring Akiko, her boss, the elderly client and Akiko’s boyfriend. As in Kiarostami’s earlier films, it isn’t so much ‘what’ is said, but more the mode of speaking and the effectiveness (or not) of communication that carries the meaning. Kiarostami provides the audience with beautifully composed and arranged scenes in which questions are raised but not answered with any conviction and we are left to provide our own meanings.

Following Certified Copy (France-Italy 2010), this is another Kiarostami film in which the Iranian filmmaker makes a film outside his own language and in a completely different culture. There is always a question over how filmmakers from ‘outside’ will represent Japanese culture, but most non-Japanese watching this film will probably not notice that this is an external view. Much has been made of the possible Ozu connections in the use of the camera, especially given Kiarostami’s own comments on the Japanese master. I’m not sure about this but I did feel some connection with another Ozu disciple, the Taiwanese filmmaker Hou Hsiao-hsien, especially via his Tokyo-set Café Lumiere. Kiarostami chose Yanagijima Katsumi as his cinematographer and his background includes work for Kitano Takeshi. I also enjoyed his work on Dreams for Sale in the last London Film Festival screenings. It’s possibly the opening nightclub scene that makes me think of Hou, but much of the rest of the film utilises long takes inside a car (as in the image at the head of this posting) and these are very much part of Kiarostami’s own style.

The question most cinephiles will ask themselves when they leave the cinema is about how they should interpret the title. I went straight to YouTube to find the version of the song used in the film. It’s a glorious track by Ella Fitzgerald from 1957. Its use is, in Kiarostami’s own words, there to represent what a person of his generation (Kiarostami is in his early seventies) might still be listening to. This is reinforced in the film’s dialogue when the client, Professor Watanabe, sings a few lines of ‘Que sera, sera (Whatever Will Be, Will Be)’ which for me will always refer to Doris Day’s version in the Hitchcock 1956 re-make of his own The Man Who Knew Too Much. The suggestion is that the old man perhaps acts ‘like someone in love’ or that he experiences events ‘like someone in love’. On the other hand, Akiko is interested in the old man’s music and his copy of a well-known Japanese painting. But we can’t be sure what she feels and indeed the main discourse in the film is ‘miscommunication’ – perhaps caused by more than one ‘someone in love’. I should also report that there is an element of danger and violence lying beneath the surface. Overall this is a film that is pleasurable to watch but which will also make you think, especially after its provocative final shot.