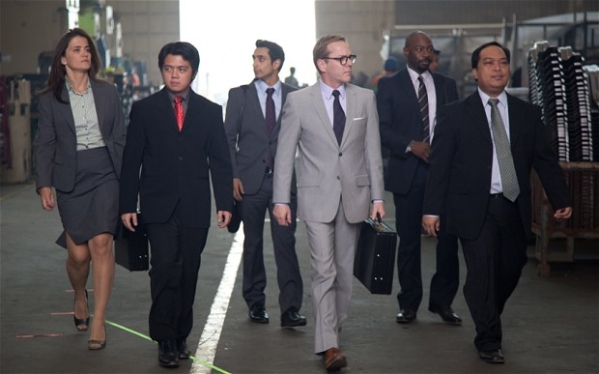 Riz Ahmed as Changez (centre back) behind Kiefer Sutherland as his boss on a trip to the Philippines to make a car plant more productive (and lose jobs).

You have to admire the chutzpah of BIFF programmers Tom Vincent and Neil Young in starting their festival with Michael Winterbottom and finishing it with Mira Nair. They are two of my favourite directors but both are almost guaranteed to cause controversy or to produce films that critics write about negatively (which is important for the success of specialised films). I wasn’t keen on the Winterbottom this time but the Mira Nair, though seriously flawed in some ways, was very interesting. The more negative reviews I read, especially from the US, the more I like it. To be fair though, the most sensible article on the film I’ve seen so far came from the New York Times.

The Reluctant Fundamentalist is an adaptation of the novel by Mohsin Hamid published in 2007. The script is by William Wheeler and Ami Boghani with some input by Hamid. I haven’t read the novel but I understand that it has been ‘opened out’ for the film – or perhaps changed in terms of genre. The protagonist identified in the title is Changez Khan, son of a Punjabi poet in Lahore who gets to Princeton and from there wins a job with a major US financial consultancy, becoming a ‘lord of the universe’ and rewarding investors while ruining the lives of workers around the world. Changez moves up the associates ladder at a rapid rate but is halted by the after effects of 9/11 and also by a relationship with the niece of his employer. He turns against his mentor, returns to Pakistan and becomes an academic. This story is told to an American journalist in Lahore in the context of the kidnapping of an American professor from the same university. We are asked to consider if the journalist is a CIA agent and if Changez has become a mujahid.

A number of reviews and comments I have read which are very negative have come from Americans who don’t seem to recognise that the narrative is from the POV of Changez, so the film works differently to those Hollywood thrillers about ‘terrorists’. Other negative reviews (including from the UK) criticise the film for lecturing/moralising or peddling clichéed liberal views and using characters as symbols for ‘big ideas’ etc. I have to admit that there are also reviews like this one in Slant magazine in which it is a South Asian in North America leading the attack. I don’t really go with any of these, though I can understand some of them.

The Reluctant Fundamentalist opens in the UK in May and despite my misgivings, it’s definitely worth seeing. Riz Ahmed is excellent and so too is Kiefer Sutherland as his US boss. Many of the people I talked to after the BIFF screening liked the film.

The major problem in the film for me was the romance. Kate Hudson has been seen by many as being miscast. I’m a bit uncomfortable about this. She isn’t, in this role, anything like a Hollywood female star and I should applaud that. To put it bluntly, she isn’t a stick insect and she seems much older than Riz Ahmed as Changez. I should applaud the casting – and her playing – but it didn’t work for me and I just didn’t believe in her as the character she played. In many ways, the romance got in the way of the main story – but it was necessary to bring the issue of family into play. The importance of the family in Lahore is emphasised several times and for me the key scenes are in Istanbul. Changez and his boss are there to close down an Istanbul publisher which is losing money. Changez reveals some of his background and the publisher says he should be ashamed as the son of a poet. Later the publisher tells him about the janissaries in the Ottoman Empire – Christian boys recruited and indoctrinated to be warriors for the Ottomans in the late medieval period. This seems to me a neat way of critiquing Changez’ position and I think that to criticise it as heavy-handed is ridiculous. Hollywood tries hard to normalise its promotion of Western capitalist values. Here Asian and Muslim values are being promoted by a character. What’s the problem?

This is another film which uses the horror of 9/11 as a key event in the narrative structure. There have been many such films from the West but relatively few that are seen from the perspective of a Pakistani character. The only other one that comes to mind is Yasmin (UK/Germany 2004). Because the event appears in the film, it seems to inevitably push the rest of the narrative into a security-based CIA thriller. I don’t think that this is in the novel and for me it spoils the film. I think what is interesting and enjoyable about the film is the struggle that Changez faces over competing ideologies and competing social environments. As he grows up he realises that he can be successful in the cut-throat world of international capitalism. He has the skills and the drive, but he attempts to combine that with a commitment to family that is threatened by the same actions. I think that narrative is compelling without the “is he a terrorist?” sub-plot which I found just made me angry. What would be interesting in terms of ‘reading’ the film would be to compare it with Indian films that similarly bring back successful migrants to the US and see what happens to them in a South Asian context. For example, Swades (India 2004) sees Shahrukh Khan return from his job as a successful space scientist to search for his childhood nanny in rural India.

The Khan family in Lahore with Om Puri and Shabana Azmi as the parents and Meesha Shafi as Bina (Changez’ sister).

Mira Nair is both an Indian and a North American director who moves between bases in the US, Uganda (where her husband teaches) and India. This gives her a different perspective on issues than if she remained in only one location. She is arguably a prime example of a ‘transnational filmmaker’. Unfortunately this also means that she can be claimed or rejected by cultural critics in each territory. In one of her best films, The Namesake (India/US 2006) she explored the two cultures narrative through two generations of a family that moved from Calcutta to New York. That film was based on a story by Jhumpa Lahiri and my feeling is that if she had stayed closer to the story by Mohsin Hamid for The Reluctant Fundamentalist, her Pakistani melodrama might have worked better. I’m not here promoting “the book is better than the film”, but I am suggesting that the added genre element of the CIA in Lahore weakens the narrative. However, shooting a story set in Pakistan presents a whole range of problems re funding and the logistics of the production. Most of the scenes in Lahore were shot in India (in Delhi) and the film has a significant Indian crew and cast. Om Puri and Shabana Azmi play the parents of Changez (played by the British-Pakistani Riz Ahmed) and the film is edited by Shimit Amin, known in India as a director. Meesha Shafi who plays Changez’ sister Bina is Pakistani. She also contributes to the soundtrack. The other heads of department in the crew are mainly American and British. Disappointingly there have been mutterings about representations of Pakistan from India but it would not have been possible to shoot this film on the streets of Lahore. Mira Nair also makes the point that her family roots are in Lahore and in the context of the film’s central narrative it’s important to remember that the values that Changez has to consider are South Asian rather than solely Pakistani. The different paths for economy and society in India and Pakistan since 1947 were to a large extent determined by the imperial decisions of UK governments in the 1930s and 1940s and the development of US foreign policy since the 1950s. Mira Nair is reported as saying that she hoped that her film would “start a conversation”. I hope that it does and that it swiftly moves on from the problems of the romance and the CIA surveillance of Lahore to consider the issues about Anglo-American capitalism, alienation and the South Asian family.