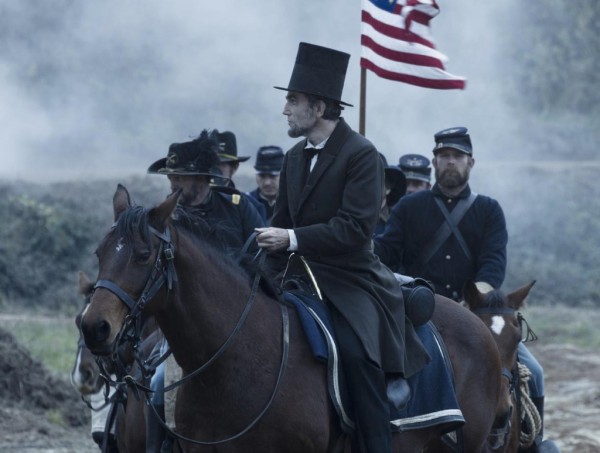 Stephen Spielberg and Tony Kushner’s award winning film is a reconstruction of a key moment in US history and the US Civil War. In another sense it is also a biography of the most famous of US Presidents, using a key moment in his life and career rather than providing an overall picture of the man. The key moment is the point at which the US Congress, sited in Washington and the Unionist North’s territory, finally approved a constitutional amendment that abolished slavery. In a sense this was an act that addressed the unfinished business of the founding fathers when they proclaimed all men equal: except of course the enslaved Afro-Americans or Negroes (the politest term in use in that period).

This is an epic production running for two and half-hours. The cinematography, sound and production design are all of a high standard. The film’s score is impressive if occasionally overly sentimental. Daniel Day-Lewis as the President has already received widespread praise, but the whole cast is excellent. This combination of talent and performance gives the film credibility both as an absorbing story and as a history lesson. The conflicts and machinations that preceded the historic vote in the House of Representatives seems to have been bought to the screen with reasonable accuracy, though there is now a debate about the veracity of the Connecticut vote in the film: an odd lapse in what seems a convincing reconstruction.

The central figure of Lincoln emerges partly in the familiar guise seen in earlier biopics: we several times see and hear his famed ability to produce a story appropriate to every occasion. A skill that often exasperated his colleagues but also frequently effectively disarmed his opponents. Less familiar is his foray into political corruption, using patronage to manipulate the vote where morals and rhetoric have failed.

Critics have already remarked on the absence of Afro-Americans from the central focus. The film opens with a strong and brutal depiction of one of the early hand-to-hand battle involving newly recruited Negro soldiers and Confederates. But after that the plot relies mainly on Elizabeth Keckley (Gloria Reuben), a dressmaker and confidant of Mary Todd Lincoln (Sally Fields), and William Slade (Stephen Henderson) the male manservant in the White House. Absent, except perhaps as part of a group of Black men who attend the day of the actual vote, is the noted abolitionist Frederick Douglass. This could be seen as an accurate reflection of the period: the preoccupation of politicians was the Union, and genuine proponents of equality between black and whites were a small (though vocal) minority. However, this dominant focus on the white, male élites has been apparent in the earlier work of Spielberg. Schindler’s List has as its main characters the Aryan Oscar Schindler and Amon Goeth: Munich (also scripted by Tony Kushner) is pre-occupied with Israelis rather than Palestinians: Amistad, like Lincoln, has as lead characters the white members of the political élite. The exception is The Colour Purple where the focus is clearly on oppressed Afro-American women.

This, of course, is part of a larger representations found across Hollywood production. The 1989 Glory, which has a much greater attention devoted to Negroes fighting for the Union in the Civil war, still relies on the character of the white officer of a Negro regiment for much of its drama. It does offer Frederick Douglass a few lines of dialogue. Spielberg has a strong sense of Hollywood conventions and history. In one of the nicer touches in the film Senator Thaddeus Stevens, a noted abolitionist, takes the House of Representatives amendment home to read to his black housekeeper and partner. This is clearly a rebuttal of the notorious The Birth of a Nation, where Stevens is presented through the character of Senator Stoneman, who is suborned by his black housekeeper and paramour.

This is the point in the film when we hear the actual amendment, read by Stevens to his partner after the historic vote on January 31st 1865.

“Neither slavery nor involuntary servitude, except as a punishment for crime where of the party shall have been duly convicted, shall exist within the United States, or any place subject to their jurisdiction.” (There is a second paragraph concerning implementation).

No mention of black people or of equality for black people. It points up the limitations of the Unionist North, the Amendment and the political establishment of the 1860s. Martin Scorsese’s Gangs of New York, shows another side of this problematic: the riots in New York against compulsory service in the Civil War armies. My sense of the US myths is that these limitations are not commonly part of the iconic representation of Lincoln. Indeed Spielberg seems to want to rescue Lincoln, assassinated just after the end of the war, from any culpability for the carpet-bagging exploitation of the defeated South and the reneging on promises to Negroes. Frederick Douglass wrote after the end of the Civil War that the Negro was “free from the individual master but a slave of society. He had neither money, property, or friends.  … He was turned loose naked, hungry and destitute to the open sky.” But the film ends with a flashback to Lincoln’s second inaugural address then held in March 1865: later in the year than in contemporary elections. The speech ends with the prayer, “With malice towards none; with charity for all; with firmness in the right, as God gives us to see the right, let us strive to finish the work we are in; to bind up the nation’s wounds … to do all which may achieve a just and lasting peace among ourselves, and with all nations.”

Of course, this end scene plays into the inevitable comparisons when we have the first black President just starting his second term in the White House. Some of Barack Obama’s election speeches clearly played into the Lincoln tradition. In that sense, though this has been a long cherished project of Spielberg’s, the film speaks especially powerfully to contemporary USA. Despite the celebratory tone at the end of this film the project of what the film calls ‘racial equality’ has yet to complete its long, violent and demanding journey: as indeed has the States yet to achieve peace with all nations. This has probably played large in the sensibilities of both the Academy members and audiences. The Guardian newspaper (g2 film & music 22.02.13) handily provided some comparisons between the box office performances of Academy Award front-runners. Lincoln is out in front in the USA ($177 mill) ahead of Django Unchained, Les Misérables, Argo and Life of Pi. But overseas it trails behind all the other five titles ($59 mill to Life of Pi’s $466).  And in the UK it is followed by Argo trailing the other four, (£6.9 mill to Les Misérables £36 mill). The actual Academy Awards were spread across these films (and others) but Lincoln with twelve nominations only gained two Oscars. There seems to be a disjuncture between the Academy and the indigenous audience.

It is a cerebral movie, and outside of the USA the political machinations of the Washington élite in the 1860s may lack excitement and panache. Some of the reviews offered strong put-downs. However, despite its lack of action it is absorbing from beginning to end. And Spielberg and Kushner know how to ring the changes. The historic congressional vote combines the drama in the chamber with some nicely judged scenes around the waiting Union. And the so famous assassination is quite daringly different. Hollywood can still turn out a winner when the subject and the filmmakers are fully in tune.