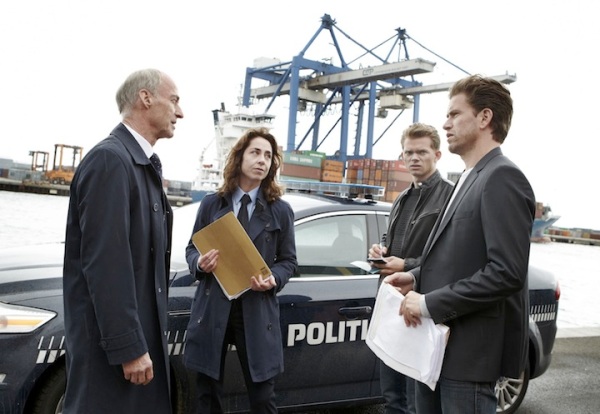 Sofie Gråbøl as Sarah Lund in uniform, with her hair down, at the beginning of The Killing III with (on the right) Sigurd Holmen le Dous and Nikolaj Lie Kaas as her partners, Asbjørn Juncker and Mathias Borch. On the left is Stig Hoffmeyer as Niels Reinhardt, one of the major characters in the story.

The third serial featuring police inspector Sarah Lund returns to the mix of elements of the first and for me represents a distinct improvement on The Killing II. Again it’s presented as 10 x 58 minutes episodes rather than the 20 episodes of the first outing. In the UK these have been transmitted as double episodes over five Saturday nights. I’ve found this too intense and we’ve watched the second weekly episode on the following Sunday evening – hooray for BBC iPlayer.

In retrospect, I think we can now see that The Killing II lost something by moving too far away from ‘family melodrama’. Its focus on the Danish armed forces and their role in Afghanistan didn’t allow the various narrative strands to cross-fertilise in quite the same way as in the first and third serials (even though there were both family issues and political intrigues). The three serials have all had the same mix of murder, families and politics but the balance of ingredients has shifted. In The Killing III there are as many as five ‘families’ or family situations. We learn something about parents and children in terms of ‘victim’, ‘perpetrator’, politician and both the main police officers. This allows the narrative to place Sarah Lund in almost impossible situations in which we are invited to consider her own relationship with her son as well as what her actions might mean in respect of the other families. I can’t think of any other film narrative with quite such a complex meshing of relationships. 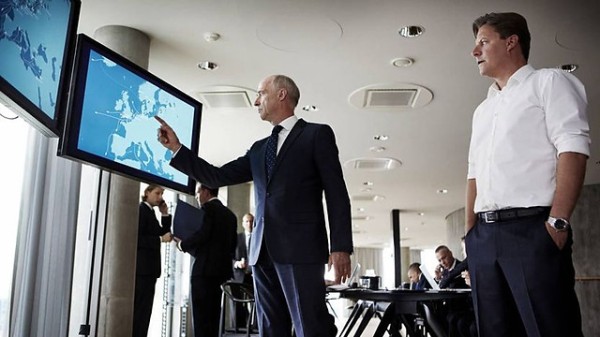 [NO SPOILERS here if you haven’t watched the serial yet.] The serial this time links very big business (a major shipping company with a large presence in the Danish economy) with a general election and a focus on the main party leaders. The central narrative concerns the abduction of the young daughter of a shipping magnate (played by Anders W. Berthelsen – who has starred in several Danish films released in the UK). Sarah Lund is once more brought back from a less demanding post to head the investigation of a series of murders that will turn out to be linked to the abduction. Sarah’s familiar problems with her mother and her son are still in evidence. This might explain why she treats her new sidekick Juncker, a very eager and determined young man, in an offhand way. She also finds herself having to deal with an old flame who she hasn’t seen since her days at police college. Mathias Borch (Nikolaj Lie Kaas) works for Special Branch (‘PET’ in Denmark) and his presence is explained by the importance of the shipping company Zeeland to the Danish government. The Prime Minister who is soon to face a General Election is keen to keep Zeeland in Denmark as a major employer (the company is a conglomerate with many interests). Later we will discover that the PM’s family is also involved in some way with the central story. 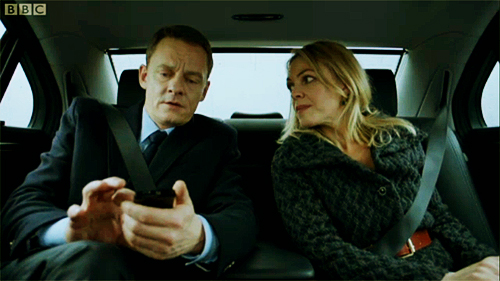 The Killing has consistently deployed the main genre elements of the current cycle of Nordic noir. The female investigator is faced by male suspects and has to deal with the men who are her professional partners and bosses and also the majority of the political figures. In The Killing III there is a female political leader and, in an important role, a female political advisor. The writer Søren Sveistrup has been careful to make two of the other female leads less than perfect characters – but perhaps this means that their characters aren’t properly developed? Some of the themes of the third serial are very familiar from other Nordic noirs. The death which is eventually revealed as the inciting incident for the whole narrative concerns a young woman in care. The global perspective is limited in this case, but the narrative does manage to raise questions about Denmark’s open borders with Sweden and Germany and, through the shipping company, its links with issues globally. The first two serials involved journeys to Sweden. The climax of the third serial takes place in Norway. The politics of the third serial is ‘national’ and focuses on the Prime Minister. In some ways it pushes The Killing closer to Borgen with a focus on the pressure of party politics – and the leader’s family. Some blog comments have suggested that these machinations are less interesting than the local (mayoral) elections in The Killing I. I tend to agree with this and I think that the Special Branch involvement means that this third serial faces the problem of balancing the frustrations of the spy thriller type narrative – i.e. the truth can’t be allowed to ‘come out’ because of national security/paranoia of the rulers – and the requirements of the Nordic noir to critique social conditions and cultural changes in a liberal democracy. As a result, there seems to be an inevitability about the weight of expectation placed on the behaviour of Sarah Lund – as if her state of mind is indicative of the condition of Denmark.

Lund is in charge – whatever her partners might think

The Killing turns out to be all about the state of Danish ‘public service’ and personal responsibilities expressed through the troubled social and working life of Sarah Lund. You do wonder if they might have called it Lund and made the comparison with Wallander more explicit. (In Germany the serial is titled Kommissarin Lund: Das Verbrechen or Inspector Lund: The Crime.) Lund is younger than Wallander, in her late thirties when the serials began in 2007, but she seems just as dysfunctional and as worn down by the job. Like Wallander with his daughter, Lund is a single parent making a less than good job of bringing up her son. Like Wallander too she is dogged in her pursuit of criminals and like him she makes mistakes, sometimes serious ones. Inevitably, the investigations are extended because of this – and the serial takes full advantage of the extra time to explore the frustrations of police procedures. But whereas Wallander operates in a generally peaceful small town in Southern Sweden, Lund operates from a base in Denmark’s capital city and is always under pressure from politicians and national police/security bosses. Again, where Wallander blusters, drinks too much and eats badly, Lund seemingly internalises everything. She doesn’t drink, smoke or listen to opera. Everything is bottled up, threatening to emerge in a violent eruption of some kind. In Killing III there is a moment of sudden ‘warm’ emotional release but it is over quickly. Inevitably, this repression builds up the narrative pressure on the last episode of the serial that ends with a climactic scene which for me works quite well – unlike the disappointing climax to Killing II.

Lund works well as a character. Although unknown in the UK before The Killing, Sofie Gråbøl has a strong star persona in Denmark which includes film, TV and stage work. She has just completed a month’s revival of her lead role in a stage adaptation of Bergman’s Fanny and Alexander at the Danish National Theatre in Copenhagen. As Lund she offers a powerful performance as a senior female police officer displaying total commitment, single-mindedness and stoicism in the face of failure. She has the occasional flash of insight and she is able to recognise the importance of tiny clues but she isn’t a ‘superwoman’ by any means. As a female hero she doesn’t have to be glamorous – though even in her jumpers and jeans she is an attractive figure and on the odd occasions when her hair is down and she is more relaxed she becomes positively beautiful.

The Killing has been remarkably well covered in the UK press. The audience for the BBC4 screenings is around 1 million – significantly larger than the cinema audience for most subtitled films. This is also the audience most likely to read the ‘quality press’. The Guardian ran a Killing blog with around 2,000 comments for each of the five weeks of broadcasts. It’s interesting to read the article by Patrick Kingsley, a young British journalist who has cashed in on the popularity of Danish TV drama with a book on Danish culture for Brits. The ‘reader’s comments’ on his short article are fascinating. They reveal very different views on Denmark’s democracy, its liberalism, equality and cultural homogeneity – and the allegations of racism and xenophobia.

Even though the serial is taken to be a ‘Danish’ production by the Danish psb (public service broadcaster) DR, it is in reality a co-production with ZDF, the German psb and it is also supported by Swedish and Norwegian broadcasters. According to Wikipedia, the serial (or at least one of the three serials) has been bought be 120 countries. Unlike most Nordic films that are usually confined to their own domestic cinema market, Nordic TV genre series are widely seen across the Nordic region and now, thanks to the ZDF sales team across the world. (For a detailed analysis of Nordic Films and TV see this report – available to download as a pdf.) This is truly global television on a scale to match Hollywood. Borgen 2 starts in the UK on January 5th – I can’t wait!