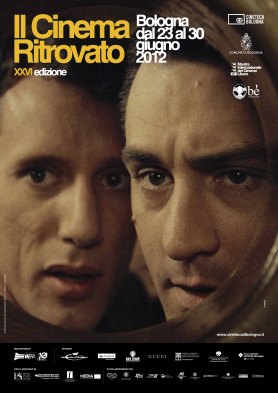 This archive film festival held in Bologna at the end of June is now in its 26th year. It has grown over that time, with over a 1000 registered members and four auditoriums dedicated to all-day screenings: added to this are the justly renowned open-air screenings in the city’s Piazza Maggiore. Even the most dedicated cinephiles cannot see everything on offer; so the week is both full of rare delights and agonising choices.

One strand over the week was a retrospective of the Soviet filmmaker Ivan Pyr’ev. The programme was titled ‘Mosfil’m’s Enigma’: Pyr’ev was, for a period in the 1950s, director of the studio. His films ranged through political dramas, literary adaptations and much-maligned musicals. Like many of his colleagues he also experienced periods of disfavour in the 1930s.

One of his admired films is The Civil Servant (Gosudarstvennyj Činovnik, 1931). The plot details anti-social actions both among rightist criminals and the Soviet growing bureaucracy. The filming is stylish but quirky; comparisons were made to the work of FEKS. Pyr’ev is one of those Soviet directors who can make inventive and slightly subversive jokes – there is a delightful pastiche of the Odessa Steps sequence which mirrors the action, camera shots and editing. Several of the musicals were shot in glorious Magicolor [A Soviet subtractive colour system] and were paeans to the Soviet collectivisation. On the one hand there was a sense of aplomb in the work of the committed peasantry, on the other hand the continuous upbeat tone create a sense of extreme simplification. Cossacks of the Kuban (Kubanskie Kazaki, 1950) was in many ways typical: it songs were visually and emotionally powerful: “the estranged heroine’s song (we hear “All through the war I waited for you”) is transformed into an anxious choral crescendo and a shot of deliriously singing young females…” [Olaf Möller in the Festival Catalogue].  The final film of this programme was an expressionist version of Fëdor Dostoevskij’s Idiot (1958). Pyr’ev’s career carried on into the 1960s, but this film provided a splendid finale.

Another programme celebrated the work of Lois Weber. She worked in Hollywood from 1913, having already directed one-reel films in New York. She went on to become a top director at Universal Studios and the first woman member of the Academy of Motion Picture Arts and Sciences. She typifies a surprising number of women filmmakers who enjoyed important positions in the emerging industry: women only rescued from the ‘enormous condescension of film posterity’ in recent decades. I missed some of the films due to the programme overlapping with that of Pyr’ev. What I saw presented a filmmaker who was technically inventive and who developed clear dramatic narratives [which she usually scripted with he husband, Phillips Smalley]. Her films now would probably be classed within the ‘social problem’ genre, and she frequently focussed on the issues facing women. The titles of some of the film suggest this: Idle Wives: Where are my Children? [It is available on Treasures III: Social Issues in American Film, 1900 – 1934]: Saving the Family Name, all from 1916. Shoes (1916) depicts the travails of a young shop assistant who is unable to afford the new footwear that she so desperately needs. 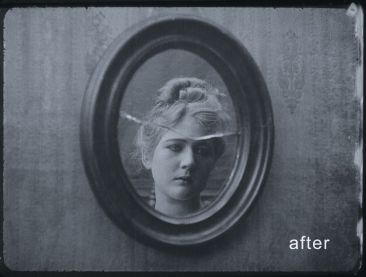 The most fascinating of these was a fairly lengthy drama from the same year, The Dumb Girl of Portici. This sparked much interest because it offers a rare opportunity to see the famed ballerina Anna Pavlova on film, in the part of Fenella. The film was adapted from an opera by Daniel Auber La Muette de Portici, first performed in 1828. The story is set in C17th Naples where excessive taxes and expropriations spark a revolt against the rule of the Hapsburgs. Fenella’s brother Masaniello (Rupert Julian] becomes a leader once the insurrection breaks out. The film has brutal extortion, exploitative seductions and popular rampage worthy of D. W. Griffith: the ending also shares his rather conservative values [the original opera seems to have been more progressive, it certainly sparked a riot in the revolutionary year of 1830]. But the dynamic section of the film, in the town square and in particular as the rebellious people lay siege to the palace of the occupiers has great elan. The striking shots of the advancing rebels reminded me at one point of the equally powerful final shot of Scaramouche  (1923), where the Sans-Culottes advance on the Bastille fortress.

Japan speaks out! The First Talkies from the Land of the Rising Sun was another fascinating programme. The focus on the arrival of the new sound technology produced a variety of films and filmmakers rather different from the film director or studio programmes I have seen in the past. The transition to sound in Japan took longer than anywhere else in the international film industry, with silents being produced as late as 1935. This was in part due to the benshi, who provided voice-over and commentary for silent films. They were clearly a better-organised and more forceful lobby than their equivalent, the thousands of silent musicians in the USA and the UK who lost their employment. In fact some of the early talkies were Katsuben Talkies, pre-recorded benshi tracks accompanying films.

The programme included films by now famous directors like Kenji Mizoguchi (Fujiwara Yoshie No Furusato / Hometown, 1930) and Yasujiro Ozu (Tokyo No Onna / A Woman of Tokyo, 1933) and the fairly small Sala Mastroianni auditorium was literally heaving for these screenings. However, what was more instructive were the two versions of the famous ‘Tale of the loyal 47 Ronin’: Chushingura, a version directed in 1912 by Shozo Makino and re-issued as part of a compilation Katsuben Talkie in the late 1930s: and Dai Chushingura, directed in 1932 by Teinosuke Kinusaga. Their different presentations of the tale actually made it far more comprehensible for me. A slightly more bizarre offering was a Katsuben Talkie version of Harold Lloyd’s Why Worry (1923 – Japanese title Kyojin Seifuku). This version was shorter than the US release, and that and the Japanese commentary meant it took some time to adjust to the film, but much of Lloyd’s humour survived into the new version. Indeed Harold Lloyd was a popular film comic in Japan in that period. A completely Japanese sound film was Namiko (Hototogishu Yori Namiko, 1932). It was adapted froma popular novel whose title translates as The Cuckoo: clearly a reference to that bird’s mating and rearing habits. There had been several earlier silent versions of the novel. In this version Yaeko Mizutani who had already performed the role on stage played the heroine of the title. The film used the Western Electric sound system. The technology seems to have been the major factor in the use of predominantly long single takes. In fact this technique seems to emphasise the almost fatalistic tragedy that occupies the film.  And we viewed a Katsuben Talkie produced on behalf of the Ministry of Education, Kagayaku Ai (Shining Love, 1931 directed by Hiroshi Shimazu). This socially conscious tale contrasted the careers of the sons of a working class cooper and a middle class salaried worker. Despite the moral tone it achieved an absorbing and humorous narrative. Intriguingly it was also reminiscent of an earlier Education Ashita Tenki Ni Naare (May Tomorrow be Fine, 1929 directed by Yasujiro Shimazu). One wonders if the Ministry had a few standardised plots that they handed out to filmmakers.

As with previous Festivals there were restorations carried out by the World Cinema Foundation. One was After the Curfew (Lewat Djam Malam, 1954), an Indonesian film made not along after the successful struggle to liberate the country from Portuguese colonialism.  The film’s director was Usmar Ismail and he also co-wrote the script. The film follows the return of a soldier who has fought in the Liberation army in the mountains. His return is marked by disillusionment as he finds complacency, even repression by the authorities and evidence of war crimes by his one-time commander. The film dramatises the conflicts as the new society emerges from its colonial chains. It was interesting but I did not find it totally convincing. It seems to want to combine a sort of Neo-realist style with the narrative tropes of film noir: they made uneasy bedfellows.

The second film was a Hindi Cinema classic from 1948, Kalpana. The director Uday Shankar, was the brother of Ravi Shankar and a central figure in the developments in Indian dance in this period. He had set up a dance academy in the late 1930s and the film seems to is an imaginative working out of this trials and tribulations in this project. Much of the 155 minutes of running time is given over to dance: and a varied programme of traditional Indian dance forms from different regions and communities, together with experimental modern dance forms. The film also has a dream-like hallucinatory quality in many sequences: parts of the film have an almost surrealist quality to them.

There was a second Indian film, the seminal Cloud-Capped Star (Meghe Dhaka Tara, 1960), scripted and directed by the great Bengali filmmaker Ritwik Ghatak. The Cineteca di Bologna has produced a restoration that does full justice both to the black and white cinematography and to distinctive soundtrack. We enjoyed an earlier Ghatak film in 2010, A River Called Titas (Titas Ekti Nadir Naam, 1973). Though less well-known known outside the sub-continent he is clearly as important a director as Satyajit Ray, though unfortunately he produced far fewer films.

One of the events at the Ritrovato is the Awards for DVD issues. The good news here is an Award for a box set of the World Cinema Foundation which includes Redes (The Wave, Mexico 1936); Hyènes (Senegal, 1992); Mest (Revenge USSR, Kazakistan, 1989), Trances (El Hal Morocco, 1981).  At the moment this is only available in the French language version: however, I was assured that the English language version [in Pal and NTSC] is on its way.

The main pleasure of the Festival is listed in the Catalogue under The Cinephiles Heaven: the screenings in the Piazza Maggiore. My greatest pleasure trip was a beautiful digital restoration of Roman Polanski’s Tess (1979). The cast, lead by Nastassia Kinski, are excellent: the cinematography is superb, and many of the sequences feel very close to the sense created when reading Thomas Hardy’s original novel. This was an epic screening of nearly three hours; then we had the even longer Lawrence of Arabia (1962, the director’s cut) in a 4k digital restoration. The screening was introduced by Grover Crisp from Sony Pictures, a restoration artist whose previous work has also graced the Festival. Both of these will presumably circulate in the UK, as almost certainly will a new restoration of Sergio Leone’s Once Upon a Time in America (1984) now running for four hours and fifteen minutes. And hopefully, a new digital version of Jacques Demy’s Lola (1961) will come round.

There was a lot more. The Festival continued it centenary explorations, this time presenting films from 1912, a series of programmes of actualities, drama and newsreel footage. There was a whole programme of film directed by Raoul Walsh, of which I only caught a couple: and the same was true for the retrospective of French director Jean Gremillon. There was After the Crash: Cinema and the 1929 Crisis, perhaps compulsory viewing for the whole European and North American establishments.

This year all the venues were able to accommodate live music, and as always the compositions and performances were a key part of the Festival pleasure. We had great contributions from Festival regulars such as Antonio Coppola, Gabriel Thibaudeau, Neil Brand, Maud Nellissen and Stephen Horne. There were orchestral performances; several led by Timothy Brock. And there was one performance that was really distinctive, the accompaniment on the final night for the two short films that preceded the final Chaplin comedies. Two popular Sicilian singers, with a variety of instruments, produced a lyrical and slightly soulful accompaniment to L’Eruzione Dell’Etna (1910) and North Sea Fisheries and Rescue (1909): in the vast but crowded Piazza Maggiore the effect was magical. This and the preceding week have made a return in 2013 imperative.