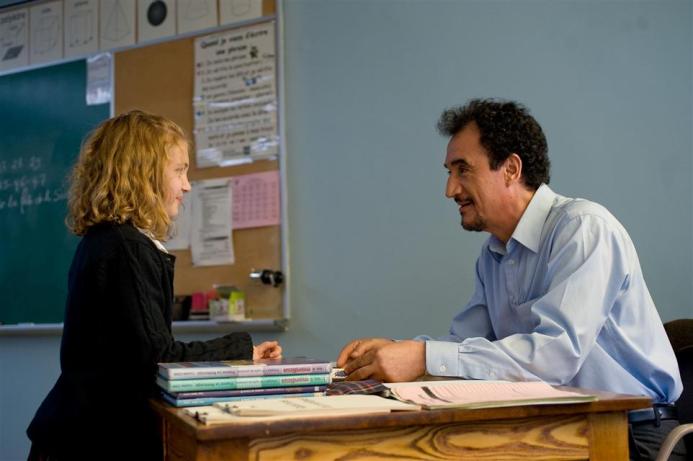 Sophie Nélisse as Alice and Mohamed Fellag as Bachir Lazhar

Nominated for the Foreign Language Oscar, Monsieur Lazhar lost out to A Separation in February this year. No contest, you might think – but I wouldn’t have liked to choose between them. A Separation was the film shown in the UK last year and I don’t begrudge it any prizes. But Monsieur Lazhar is my film of this year so far. We had a quartet of star films from Cannes 2011 that opened here a few months ago, but they all signalled their qualities from afar. Monsieur Lazhar seemingly promises little – a new teacher takes over a class in a Montreal primary school after the sudden death of a popular classroom teacher in rather unfortunate circumstances. Against all the odds, the new teacher will triumph with his class and all will be well. Not quite. From the same producers who brought us last year’s Canadian triumph Incendies, this shows that Quebec cinema is on a hot run at the moment.

The triumph of this film is that it attempts a great deal with two strong central narratives – one about the school and one about the new teacher’s own story – which it succeeds in bringing together through a tight discipline of constraint. The script utilises five familiar types for the individuated pupils in the classroom but in the hands of director Philippe Falardeau the child actors (all excellent) are allowed to perform in an unrestricted way. The point about social types is that we recognise them for a good reason – we do commonly find them in society. Who can’t remember in their childhood the overweight klutz who is the butt of jokes, the kid who is always suffering from nosebleeds, the very bright one with obnoxious pushy parents? Occasionally Falardeau teases us with the possibility that the typical character will complete the typical behaviour and we will groan with the inevitability of it all – but each time he just stops as if the punchline is the restraint itself and then moves on to something else.

The school community itself is extremely well observed and the teachers are well cast, especially Danielle Proulx as the Principal. My viewing partner, with long experience of primary classrooms, said she would have loved to work in this school – a perfectly ordinary inner-city school with a nice mix of children from different backgrounds. For UK audiences caught up in the nightmare of the current government’s assault on the education system it’s fascinating to be offered a view of education seemingly from another time. It was only afterwards that we realised that here was a school in which there were classrooms with conventional desks, no sign of children with mobile phones  – and no computers! The new teacher finds a laptop on his desk and immediately tries to put it into his desk drawer (it doesn’t fit). I’m not sure if the school is meant to be representative of the Quebecois school system, but we haven’t seen classrooms like this for many years in the UK. But this doesn’t mean that the classroom issues aren’t still relevant – the layout of the desks, the appropriateness of reading material, discipline and most important of all the policy that doesn’t allow teachers to touch children in any way whatsoever.

I should explain that the reason why these all become issues is that the replacement teacher is Bachir Lazhar, an Algerian migrant who appears in the principal’s office like an angel when she is convinced that a replacement teacher is not going to be found  immediately. Bachir tells her that he is a permanent resident in Canada and that he has many years of teaching experience. Unfortunately neither statement is true. But he is clearly a decent man with an engaging personality and he gets down to work without any fuss.

The sudden death has upset the children in the class, especially Alice and Simon. Bachir finds himself at odds with the school in how they should deal with the trauma experienced by the children and with the children themselves over his very traditional ideas about classroom activities. What he decides to do is in some ways pedagogically conservative and he finds himself needing to adapt for a group of contemporary young Canadians. He sets them a dictation exercise reading from Balzac – perhaps a reference to Truffaut and the classroom in 400 Blows? On the other hand, his ideas about discussion of his predecessor’s death (which is still clearly an issue for the children) seems quite progressive compared to the strict use of sessions with a psychologist for the children at which he is not present. You may disagree, but this is the point, Bachir Lazhar is only like an angel in his ability to materialise when needed. Like everybody else in the school he has some ideas that work and others that don’t. This is carried through to the film’s resolution, which seemed fine to me – there is no feelgood Hollywood moment.

Monsieur Lazhar has a backstory that I won’t reveal but it means that his interactions with the other staff are sometimes a little difficult – i.e. there are other issues as well as his unfamiliarity with aspects of Quebecois culture. In her otherwise supportive review in Sight and Sound (June 2012), Hannah McGill suggests that the script is clumsy in the way some of these moments are handled and she implies that the plot needs contrivances to enable certain themes to develop. I disagree. I don’t mind plot contrivances – if the events themselves are believable and they all felt very recognisable for me.

The film is conventional and possibly ‘literary’. It’s based on a play written by Evelyne de la Chenelière, who has a small part in the film as Alice’s mother. The origins are evident in the limited locations used (mainly in the school or the homes of a limited number of characters). As I’ve indicated, the school itself may be a little anachronistic, but otherwise this is a straight realist drama. There was just one moment when I thought the film deliberately moved into fantasy (I’m probably remembering it wrongly, but I don’t think it matters). M. Lazhar is marking books at his desk in the school. It is evening and a general hubbub of voices, laughter and music is coming from a school party. M. Lazhar gets up, stretches and with his back to camera starts to dance. At this point, non-diegetic Algerian music comes on the soundtrack and his dancing becomes more sure in its movements. Pure magic! See the film if you can.