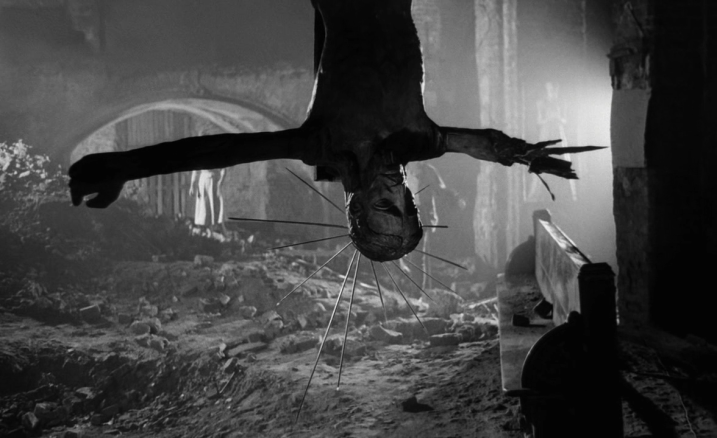 Jonathan Rosenbaum makes the point that while this film is about the forties, it’s set on the day of the Nazi surrender, it’s overlayed by a fifties’ sensibility. This is evident through the James Dean-like Zbigniew Cybulski (though Rosenbaum cites Brando) but also in the European Art cinema style in which its shot. The ‘heavy’ symbolism of the still above is a good example. Add to that the melodrama of the young man, who’s fighting against the Communists and wrestling with his conscience whilst falling in love with the beautiful, and melancholic, barmaid, you have cinema made for me.

This blu-ray edition looks terrific and so emphasises the wonderful cinematography with stunning Expressionist lighting. Director Andrezj Wadja was clearly influenced by Bergman, I love the horse that simply walks into the mise en scene, but also Welles, particularly his use of deep focus.

The film brilliantly dissects a moment in history when everything for Poland was going to change (except in a way it didn’t as they, once again, became dominated by a foreign power). The possiblities of the time, those grabbing power, the splintering of families due to the war, are all portrayed in an affecting human story. Cybulski plays Maciek who’s been sent to assassinate a Communist Party official; he fails but has the night to fulfill his task except that’s when he meets the barmaid.

The official’s son is part of the reactionary forces that are opposing the Russian takeover, however the bourgeoisie’s grab for power is in full swing anyway, shown by the small town major’s celebration at being appointed a minister. The climax of the party, where they are all drunkenly dancing to a bastardised version of a Polish national song, is truly surreal. As is the denouement for Maciek, in a setting worthy of Bunuel.

I’m not sure if Wadja’s in or out of fashion at the moment, very few of his recent films have been distributed in UK; he’s still making them and is 86 next Tuesday. Ashes and Diamonds forms the third in his ‘War Trilogy’,  A Generation (Pokolenie, 1955) and Kanal (1957); there are all must-see films. The first two, the narratives are unconnected, have a pronounced debt to neo-realism; Ashes and Diamonds is a triumph of expressionist cinema.