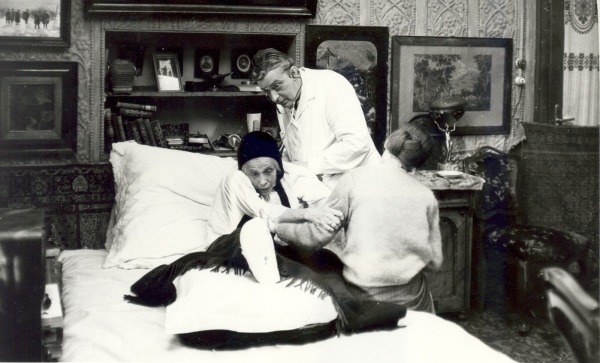 This is a film with a delicate surface but a tough interior. It opens with an old an infirm woman (Lili Darvas) under the care of her servant Iren. She is visited regularly by her daughter-in-law Luca (Mari Torocsik), whilst her son Janos (Ivan Darvas) is away in an uncertain situation. From the start the film mixes memories with then present in short, elliptical inserts. This is essay on time and memory reminiscent of the work of Alain Resnais. Apart from food and flowers the daughter-in-law brings letters from the absent son. But it becomes apparent that his situation is different from the successful career presented in the letters.

Like other Hungarian films there is a strong sense of allegory, and some of the use of settings as well as the graphics in the inserts reminded me of the films of Miklos Jancsó. But this has a different sort of lyricism, a fragility that echoes the feelings of the characters involved.

The film adapts two short stories of the writer Tibor Déry.  This is reckoned to be the finest work of the director Károly Makk, who trained in the Socialist Film School and started directing in the 1950s. The cinematography by János Tóth makes beautiful use of the black and white images, and achieves delicate effects with special lenses, long lenses and the occasional zoom. What we would now call the sound design is notable for the mix of dialogue and sounds, including those of the settings and animals. The editing is distinctive, and one constantly has to respond to changes and new images. The English subtitles are less judicious, with some odd spelling and formulations, though one can always work out the sense. Given this is Hungary in 1972, an audience can soon work out what is likely to be the actual situation of the son and husband. There is a distinct lack of signs as to places, dates or events. This gives the film an allegorical feeling, but presumably also deflected possible political criticism.

One of the strengths of the film is the way that the characters’ feelings and their fears are so effectively captured. On one hand, parts of the film feel like a poem on aspects of love, in other parts there is a strong sense of the realistic depiction of the characters situations. It has an intense sense of place, setting, objects and props. The camerawork makes a viewer strongly aware of the physical context, in which the characters are found, move and interact.

“One of the chief merits of this film is that it presents complete human beings. It employs small gestures (sinking wearily into a chair, smoothing the coverlet, or remembering an insignificant episode from the past) to present a rich world of emotions.” (Károly Nemes, Films of Commitment, 1985).