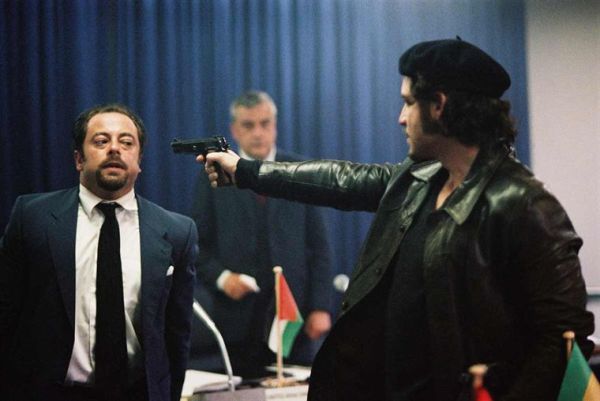 This post refers to the 165 mins UK cinema release of the film which exists in longer film versions in other territories as well as in a much longer mini-series version for TV and DVD. The film is a fictionalised account of the exploits and ‘domestic’ life of the Venezuelan assassin/guerilla fighter/revolutionary soldier ‘Carlos’, sometimes referred to as ‘The Jackal’ after the fictional character created by Frederick Forsyth. His real name is Ilich Ramírez Sánchez (born 1949) and the events depicted in this film version date from the period 1973-1994, during which time Carlos was mainly concerned with supporting one of the Palestinian guerilla factions, the PFLP (Popular Front for the Liberation of Palestine), although seemingly for a faction of the PFLP run by Wadie Haddad, who was eventually expelled from the organisation. The film’s main set piece is the attack on the 1975 OPEC (Organisation of the Petroleum Exporting Countries) Meeting in Vienna and the attempt to use hostages in a scheme to discredit Saudi Arabia and support Iraq – thus the convoluted politics of the Middle East during the Cold War.

Cutting the film out of 334 minutes of material (the longest TV cut) means that the structure of the film is rather unbalanced and I did feel that the last third of the film was something of an anti-climax, partly because it comprised scenes separated by fades to black which both signified the sometimes large leaps forward in time, but also for the audience the suggestion that bits of the story were being missed out. The IMDB details suggest this, showing that the later scenes in the film appear in Episode 2 (of 3) in the TV version. Despite the possibility that watching the film on video might offer a more coherent experience, I’m glad I saw the ‘Scope print in a cinema.

As a production, Carlos is certainly impressive. It ranges across locations in several countries, all of them represented with a sense of authenticity. The characters (from many different countries and backgrounds) are all well represented by convincing actors and in the central role Édgar Ramírez is phenomenal – not least in his ability to speak several different languages fluently. Unlike Hollywood films, this French-German production requires all the characters to speak in first languages where feasible. Carlos speaks English to several German characters, but also French, Spanish and Arabic as required. Other than that he has to follow the De Niro line in Raging Bull and gain/lose weight throughout the film (something emphasised by several nude scenes) and age twenty years – both of which he achieves with aplomb.

The film has gained rave reviews from many critics and appeared on several ‘best of’ lists for 2010 but I’m still not sure. Putting aside the structural problems and working just on this 165 minutes, I think that it is probably best summed up as being a major film which is seriously flawed. The successes I think are first the representation of a now historical era – certainly the world before 1989, the bulk of the film. I did feel that the film captured something of a world that I remember (almost entirely from television) and it made me think about the changes. The kind of security that we now take for granted was almost non-existent then and was instituted largely, I assume, because of the airline hi-jacks and attacks carried out by the PFLP and other groups in the early 1970s. But these representations also throw up some surprising elements of almost black comedy, e.g. when a little blue and white UK police ‘panda car’ arrives after an attack in London or the seemingly old-fashioned Austrian police have to deal with ruthless guerillas. The other big change is in the lack of obvious American presence in most of the film. They may be manipulating other agents, but the CIA don’t make an appearance until late on.

The other major strength of the film is that in the long hostage sequence, it is possible to suspend disbelief and become engaged with Carlos as a guerilla leader thinking on his feet. Earlier too in a confrontation with police, we can feel that he is doing the logical thing, brutal though it may be. This isn’t a Hollywood thriller where we identify simply with an individual, with Carlos we do get the chance to explore whether he really is a revolutionary figure – if he cares about a cause and weighs up the violence with the aims of his mission. My feeling is that the balance shifts over the course of the film and in the latter stages he is a much more conventional figure.

The real problem in the film for me is in the script and in particular the dialogue. I’ve never knowingly discussed revolution with a real revolutionary but I felt that much of the dialogue, especially in the last third, was almost comic in its use of clichés – like some kind of TV sketch parody. This wasn’t helped by the relationships Carlos had with various women, but especially his East German wife, Magdalena. I didn’t get to see the Baader-Meinhof film, but I know it met a very mixed reception. What is it about the German ‘feminist revolutionaries’ in this period? I found all three German women in the film a trifle odd. One seemed very ‘ordinary’, one was clearly suffering from a psychosis and Magdalena appeared more Mata Hari than 1970s feminist. Perhaps they were accurate portrayals but as representations they just didn’t seem to fit in. The script is by Dan Franck and Olivier Assayas. Assayas also directed the film and should take great credit for the set piece scenes and the overall direction of actors.

Reading through a wide range of internet postings, I think that it is clear that many posters treat the film as a kind of superior crime thriller, focusing on Carlos as a certain kind of action protagonist. This often comes across as a liking for a ‘boy’s film’. If I’m disappointed it is because the political questions are much more interesting for me. I’d like the film to have been more like Motorcycle Diaries (I would be very interested to learn about Carlos as a teenager) and less like the Mesrine films (which I enjoyed as genre films).

Useful review of the 319 minute cut.