Keeping an eye on women

Jafar Panahi was fortunate, I think, to be on the jury of this year’s Cannes film festival as it made his incarceration in Iran high profile and newsworthy so probably led to his release. The fact he was also on hunger strike accentuated the situation. His ‘crime’ was, reportedly, planning to make a film about last year’s disputed election in Iran. Was his arrest a tribute to the power of filmmakers or simply a symptom of the insecure feelings of an illegitimate government?

Panahi has anti-Iranian establishment form and these two films portray the ludicrous patriarchal aspects of Iran’s Islamic nation. The Circle starts with a mother worried her daughter will be divorced because the her newly-born grandchild is a girl and not the expected boy. The women are throughout restricted by what they can do because they don’t have a man’s permission. Hypocrisy reigns as – pictured above – a character is asked to make a phone call by a policeman just in case a husband answers the phone and the women are constantly verbally sexually hassled by men on the street.

Panahi’s genius is his use of realism as the camera, at the start, seems to wandering the streets capturing what’s going on. We’re often in the dark as to what’s happening (why were the women imprisoned?) just as we would be as external observers to the events. It’s also tightly structured, it begins and ends – like The Searchers – with an opening and closing of a door. 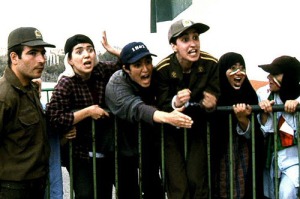 Not watching the match

In some ways Offside is more audacious than The Circle as it was shot on location defined by both place and time. The ‘time’ being the day of a crucial World Cup qualifier and much of the film is shot at the stadium where the game took place. Brilliance all round from cast and crew to make this one work. Again the theme’s the subjugation of women – they are not allowed to watch the match as they might hear ‘bad’ language – and their sisterhood as they resist men’s power. While most of the men in The Circle are negatively represented, here we get to know the women’s guards and they are mostly fairly pathetic characters who are simply following orders.

Panahi shot the film hoping that Iran would win the game in order to have an upbeat ending. This contrasts with the bleakness of The Circle and it’s unfortunate that the earlier film seems to be the one that accurately portrays the conditions in Iran at the moment. And as I write this the news tells me that the Israelis are using their usual violent tactics in killing at least 11 people bringing supplies to the Palestinians. Until the Palestinian question is resolved (and I don’t mean Israel’s solution) then the mess to the Middle East will continue to destabilise the world.