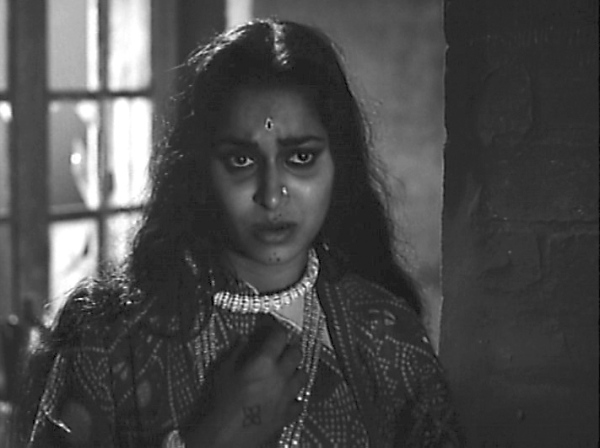 I don’t remember this getting a release in the UK and I only came across it with the release of the Masters of Cinema DVD a couple of years ago.

The protagonist of the film is ‘Singhji’ a taxi driver in West Bengal who holds dear his Rajput ancestry as a descendant of traditional warriors. He considers himself to be a warrior amongst drivers and it is fitting that he should drive a glamorous car – a 1930s Chrysler. The film is presumably ‘contemporary’ but Singhji comes across as a stylish character despite his ancient vehicle. His status also includes command of a faithful retainer – a mechanic, come watchman, come conductor – who perches on the running board as Singjhi drives across the eerily barren landscape (reminiscent in some ways of the river bed/plain in Ghatak’s Subarnarekha). The DVD tells us that this is actually the Bengal/Bihar border. The local landmark of two stones balanced one on top of the other is quite well-known as the ‘Uncle and Nephew’.

The disrupting incident is a rash action by Singhji which leads to his licence being revoked. Forced to look elsewhere for work, he gives a lift to a businessman who recognises the possibilities of using his services and offers him a deal – to become his part-time driver. In return, the businessman will help him get a new licence. Clearly the deal will involve something illegal but Singhji decides to stay and take up the offer after he meets an old acquaintance from his village – a low-caste man who has converted to Christianity in order to escape the constrictions of caste. This man’s family and the other characters that Singhji meets are the catalysts for a series of moral dilemmas that the warrior-rebel must face.

The film feels like a humanist character study and I could imagine it as the kind of story that might have interested Kurosawa. I’ve seen analyses that discuss the film as an ‘action’ film or as something akin to the generic stories of popular cinema. However, there is relatively little action spread across the film’s 150 mins. Certainly there are some chase sequences and some scuffles that may indeed be inspired by John Ford, but this is still basically a character study, albeit one framed in a structure that fits the Yojimbo/Fistful of Dollars scenario with Singhji as the stranger in town who confronts the existing relationships in the community and takes sides.

According to the excellent support documentation that comes with the DVD, Abhijan was the most popular of Ray’s films in Bengal. It began as a commercial film that was chosen as a directing project by a group of Ray’s acquaintances. Ray initially supplied the script, but when they decided that they couldn’t manage the shoot, Ray stepped in to direct and as the MoC blurb has it his “mastery turned a starkly conventional plot into a subtly nuanced story”. Abhijan is an adaptation of a novel by the Bengali writer Tarashankar Banerjee. Ray had already made one film based on a Banerjee novel – Jalsagar (The Music Room) in 1958. One reason for the Abhijan‘s popularity might have been the presence of Waheeda Rehman, one of the great stars of Hindi Cinema in the 1950s and 1960s, often in association with Guru Dutt as actor or director. She plays a prostitute who in different ways challenges Singhji’s misogyny and his self-despair. As well as his sense of failure – a warrior reduced to a driver’s role – Singhji has ‘lost’ his wife and turned to alcohol. The role is played by one of Ray’s best known players, Soumitra Chatterjee. The beard that he wears for the role of a Rajput changes his appearance profoundly and I didn’t recognise him. Most of the rest of the leading players in the cast also appeared in other Ray films before or after Abhijan.

I found the film fascinating, not so much for the character study itself, but for the formal, aesthetic qualities. The opening is striking with a carefully framed medium close-up of a man commenting on Singhji’s predicament – with Singhji himself seen only in the mirror located behind the man’s head. I’ve already commented on the use of landscape which inevitably made me think of Ford and Kurosawa, but also of one of the earliest neo-realist films, Ossessione (Italy 1942) set in the flatlands of the Po Valley. Perhaps this is the key to Ray’s early cinema. A blending of different but related realist visual styles using Black and White cinematography produces something which in the end is not realist as such but does carry a powerful sense of a ‘lived in’ landscape. Cinematographer Soumendu Roy had already worked on Teen Kanya (Three Daughters, 1961) for Ray and would go on to shoot several more films for him. I also feel compelled to mention the music – composed by Ray himself as it usually was from the early 1960s onwards.

Looking for comments on the film, I turned to Richard Roud’s Critical Dictionary of Major Filmmakers published in 1980 by Martin, Secker & Warburg. I was immediately taken aback by the stance of John Russell Taylor who wrote the long entry on Ray. This was the period before serious attention was paid to Indian Cinema by Western critics. Taylor dismisses all the rest of Indian Cinema as “trashy, theatrical, sentimental and fantasticated”. Ray is a singular figure who stands outside such nonsense. But Abhijan shows what might happen if Ray sullies himself with the commercial Indian Cinema. Commenting on the fact that Abhijan has been little seen in the West, Taylor opines that this seems “reasonable in the case of Abhijan, a picaresque adventure story centring on a taxi driver, his romantic and dramatic entanglements . . . and which has little to commend it apart from the interest of seeing him handle a subject much closer to the Indian commercial norm than any of his other films”. This seems to me a good example of how prejudice clouds judgement. For Taylor, any suggestion that the film was ‘commercial’ automatically places it beyond the pale. Presumably he simply didn’t see the strength of performances, camerawork, music and overall direction? ‘Picaresque’ suggests a protagonist who has a series of adventures – not necessarily linked by anything other than the central character. This isn’t the case with Abhijan. Singhji only has one ‘adventure’ as such and although he responds to several characters, they are all in the same story.

Unlike the 1970s critics, I’m reluctant to jump to any immediate conclusions about Ray’s films. I am struck though by the thought that in one sense Singhji is a modern/modernist character who slides around issues of class and caste (and religion). He allows an individualist focus in the narrative and I return again to that Yojimbo/Man With No Name conception. And I still don’t really understand the English title of the film.

The MoC DVD is very good and well worth the money. The print has been digitally restored.