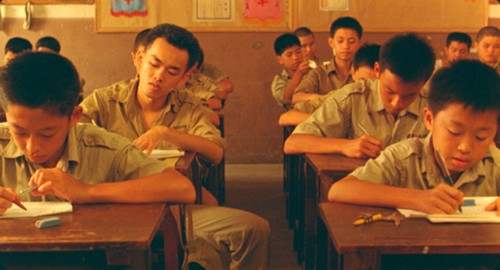 Sly, Si'r and Cat in class

The film has been restored to its original 237 minute length. This version was seen only briefly in the UK. The version seen in the BBC top ‘100’ was the shortened version, which only runs for 3 hours. The shortened version appears to have had mainly subsidiary scenes that refer to supporting characters edited out. The main story is still clear in this version, but the complete film fills out the world of school and gang cultures.

This is clearly an epic film to watch, but one that amply repays the time spent. Yang shares some characteristics with his fellow Taiwanese filmmaker, Hou Hsiao-Hsien. The latter’s Three Times (Zul Hao de Shiguang, 2005) covers a slightly later period in its first story, A Time for Love. The long shot and the long take dominate the film. Yang frequently uses slow pans that allow a viewer’s gaze to survey the settings in which events occur. And the narrative follows an elliptical course, becoming quite complex as it cuts between a number of major characters. It opens, a title informs us, in September 1960.

The central characters in the film are Xiao Si’r (Zhang Zhen) and his family, which includes and an elder brother and three sisters. His father is a civil servant who migrated to the island when the Guomindang fled the mainland after losing the Civil War with the Chinese Communist Party.

One recurring family incident concerns a valuable watch belonging to the mother which the sons ‘borrow’ in order to pawn and raise money. A key early scene concerning the watch is missing in the short version.

Si’r attends a ‘night school’, in Taipei. Taiwan appears to have had an unusual arrangement of schools in this period, with less privileged pupils attending some daytime and some evening classes. Much of the action occurs in the school and we see a variety of classes and actions there. Examinations and tests are frequent.

The other important, though unofficial, institution is the youth gang. The films focuses on the rivalry between the Little Park Gang [which includes Si’r and his friends] and the 217 Gang, which is from a working class district. The youth gang culture actually afflicted the island in this period. And the violent climax that resolves the film was also based on an actual incident that the director remembered from his youth. An opening title suggests that the gangs are a manifestation of young people’s insecurity, resulting from their parent’s own insecurities after fleeing the mainland for the Island.

The film’s primary focus is male. Si’r close friends are Cat [Wang Qizan] and Airplane [Ke Yulun]. And there is an uneasy relationship with Sly [Chen Hongyu], the substitute leader of Little Park Gang. The original leader, Honey [Lin Hongming], had to go into hiding following a fatal incident. At school Si’r acquires another friend Ma [Tan Zhigang], who comes from a more affluent military family. He has been moved to the school after an earlier and violent incident at another institution.

Another key character is Ming [Lisa Yang], a girl pupil at Si’r school with whom he gradually develops a relationship. She was originally the girl friend of Honey, and appears to have other relationships as well. But the films masculine focus includes a critical perspective. Ming tells Si’r that, like all her boyfriends, ’you want to change me’ for selfish reasons. All these characters are affected by the ups and downs in gang conflicts.

The screenplay that Yang wrote with three colleagues, both evokes and comments on the troubled times that followed the Guomindang’s arrival in Taiwan. The defeated nationalist party instituted an authoritarian state, though one that went unremarked by its US allies even as they denounced ‘totalitarian’ Mainland China. In the film Si’r father [Zhang Guozhu] is the victim of a secret police interrogations whose purpose is never clearly explained. Like Hou Hsiao-Hsien, Yang’s films explore the impact of the Taiwan’s chequered history on its inhabitants. Both are now able to explore the repressions and conflicts that for years were not publicly recognised.

The complexities of plot and character mean that an audience has to work to follow events and developments. One of the pleasures of a second viewing was I was able to explore the film more fully. Also, seeing the full-length version for the first time I noted scenes that previously been missing, and which filled out some of the characters and their situations. Yang has a real mastery of mise en scène, and the long takes enable one to note the settings and the many visual motifs that help construct the film.

One of these is light. The film opens with a shot of a solitary light bulb. Early in the film Si’r acquires a torch, which he then carries for most of the rest of the film. He pinches the torch from a film studio that he visits one evening. Just before the film’s climax he returns and inadvertently leaves the torch. And the lighting and blocking in the film constantly reinforce this theme. Torchlight, candlelight, power cuts and blackouts are spread across the film. Much of the film is shot in twilight or at night. Some scenes, with large blocks and shadows, reveal only little of the action. Sight and watching is another motif: characters frequently stand and observe other characters. Si’r himself has an eye ailment for which he receives injections at school.

One of the arresting images in Hou Hsiao-Hsien’s Three Times was the snooker hall in the sequence A Time for Love. Similarly in Yang’s film a snooker bar is an important setting. But this is a seedier and darker site than in the later film. The most violent confrontation between the two gangs takes place here.

The film also has a fine soundtrack. One frequently finds oneself listening to accompanying sounds like bands, firing ranges, bicycles, doors and so on. The film uses music to comment on the narrative. The film’s title is taken from Elvis Presley’s song, Are You Lonesome Tonight, which is sung up by one of Si’r friends, Cat, after Si’r elder sister [Wang Juan] has transcribed the lyrics. The song re-appears in the final sequence of the film, and is clearly ironic.

A Brighter Summer Day is an extremely fine film that is certainly worth a viewing. I can think of considerably shorter films that seem to take a lot longer on screen. Its complexities are beyond a relatively short review. For example the film studio that appears briefly in the film offers an interesting commentary on film itself. In his last visit a disillusioned Si’r shouts at the director  [Danny Dunn] that he cannot tell ‘real from fake’.

The World Cinema Foundation is dedicated to the ‘preservation and restoration of neglected films from around the world’. The moving spirit in the Foundation is Martin Scorsese. Other noted filmmakers on the Board include Souleymane Cissé, Abbas Kiarostami and Wong Kar-Wai. The restored films are premiered at the Cannes Film Festival. www.worldcinemafoundation.net

They are also screened at Il Cinema Ritrovato. The latter is an archive festival held annually in the city of Bologna. The festival covers world cinema from the early silents up until recent productions. http://www.cinetecadibologna.it/cinemaritrovato.htm