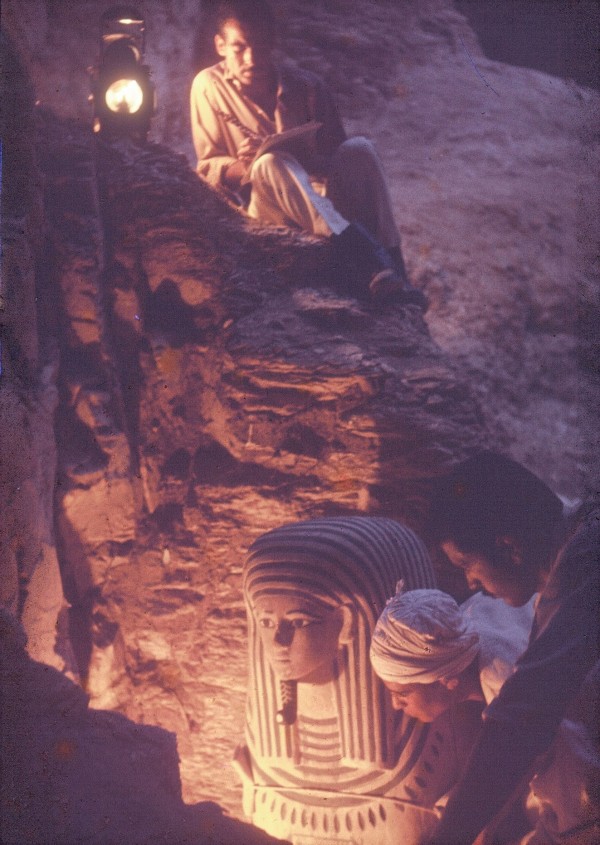 The Night of Counting the Years [UK release title].

This is a classic Egyptian film that has been restored by the World Cinema Foundation at the Cineteca di Bologna and screened at Il Cinema Ritrovato. It was the only feature film to be made by the writer and director Shadi Abdel Salam, though he did make a few short documentaries. The film credits bear the title ‘sponsor Roberto Rossellini’. Apparently Salam visited Rossellini and asked him to direct the film, but Rossellini persuaded Salam to direct it himself.

The film dramatises events that occurred in 1881, when it was discovered that precious archaeological treasures from one of the tomb of an ancient Pharaoh were being sold to foreign collectors. This was the Deir el-Bahri cache, a tomb shaft that contained over 50 mummies, unusually, from five separate dynasties. These had originally been moved and secreted by priests to prevent looting as the Egyptian Empire collapsed. The cache was sited in cliffs away from the famous Valley of the Kings on the West Bank of the Nile. It is worth noting that 1881 was the year that a nationalist rebellion broke out against the colonial domination of Egypt. In 1882 the British fleet first bombarded Alexandria and then occupied the country.

Salam turned the events surrounding the hidden cache into an evocative and haunting tale. In the film a local tribe, the Horabat, are secretly raiding a lost tomb near Thebes. The Egyptian Archaeological Society sets out to disrupt this illegal trading and find the actual location. However, the bulk of the film focuses on the activities of the Horabat tribe and dissension amongst its members.

The film is slowly paced and has a poetic feel. Martin Scorsese writes: “Al Momia has an extremely unusual tone – stately, poetic, with a powerful grasp of time and the sadness it carries. The carefully measured pace, the almost ceremonial movement of the camera, the desolate settings, the classical Arabic spoken on the soundtrack, the unsettling score by the great Italian composer Mario Nascimbene – they all work in perfect harmony and contribute to the feeling of fateful inevitability.” [Il Cinema Ritrovato catalogue 2009).

The scenes are presented one by one, without transition shots. Frequently an event seems disconnected from its predecessor. The film often uses tracking shots, mainly forward or reverse, which are grimly slow. The colours are muted and many scenes are fairly dark. Daylight is opaque and night-time or interiors have great blocks of darkness. The use of classical Arabic is unusual, even in Egyptian films.  There is an almost dreamlike quality, appropriate to the themes of death, memory and the past.

The English language title of the film is set out in the first scene at a meeting at the Cairo Museum. Professor Raspére presents a quotation to his colleagues from the 3,000 year oldBook of the Dead. He offers an incantation that:

“. . . restores to the dead the power to remember his name. A spirit without name is doomed to wander in perpetual anguish.”

This sets up the major themes of the film, names and identity, memory and the past. It is worth noting that a number of key characters in the film are not identified by name. These include the leader of the Society’s expedition: one of the brothers in the tribe, his mother and the elders: and the officer of the Egyptian militia.

Professor Raspére also shows his colleagues a parchment that has been illegally trafficked to the West and which relates to an unknown tomb of a Pharaoh. This leads to the Archaeological Society visiting the valley near Thebes, out of season, hoping to catch the grave robbers unprepared. The only support for these effendi [as the locals call them], after a steam journey up the Nile, is a group of the Guards of the Mount of the Dead.

The viewer’s first encounter with the Horabat tribe is the funeral procession for the dead leader, Selim. The procession ends at a circle of white funeral obelisks. Here, Selim’s two sons are taken apart by tribal Elders and informed that they must take responsibility for a secret held by their father. This is the secret cache, which is regularly raided for valuables that are sold to a middleman, Ayoub. The sales appear to be the main source of income for the tribe.

The stealthy journey to the cache leads us through a chain of mazes and labyrinths. Such labyrinths recur throughout the film, in rock defiles, caves, and ruined palaces. At the end of these is the treasure. However, there is also a monster – desecration of the dead motivated by greed –  which leads to the death of the elder brother.

He tells the elders that they should ‘leave the dead in peace’, and refuses to continue the robberies. The younger brother, Wannis, is confused and uncertain. But their mother sides with the elders, and tells the older brother, ‘I no longer have a name to give you.’ This brother attempts to leave Thebes, but is killed on a boat, which bears a mysterious sign, ‘two hands in the shape of a butterfly’. This probably has some meaning in Egyptian culture, but certainly for foreign audiences it feeds into the overall ambiguity that envelops the film.

For much of the film the younger brother Wannis is torn between loyalty to his tribe and his revulsion at the grave robbing. He is subjected to a series of temptations, by the elders, and by Mourad, an accessory of Ayoub, who wants to take up dealing himself.

Finally Wannis visits the Society’s steamer and discloses the site of the cache. Guarded by the guards the 40 odd mummies are transported to the steamer, which then sets off to Cairo and the museum.  The ending resolves the problem of the film in one sense; the cultural treasures are passed into safekeeping. And it resolves one problem regarding names and identity.

“Rise you will not die out. You will be called by your name. You are given new life.”

However, the film’s ending has a desolate tone. Still bruised from an attack Wannis wanders away along the banks of the Nile. And the gulf between the tribe and their desolate area and the elite in their metropolitan city appears as wide as ever.

The World Cinema Foundation is dedicated the ‘preservation and restoration of neglected films from around the world’. The Chairperson of the Foundation is Martin Scorsese. Other noted filmmakers on the Board include Souleymane Cissé, Abbas Kiarostami and Wong Kar-Wai.The restored films are premiered at the Cannes Film Festival. www.worldcinemafoundation.net

These restored films are also screened at Il Cinema Ritrovato. This is an archive festival held annually in the city of Bologna: 2009 was the 23rd. The festival covers world cinema from the early silents up until recent productions. http://www.cinetecadibologna.it/cinemaritrovato.htm