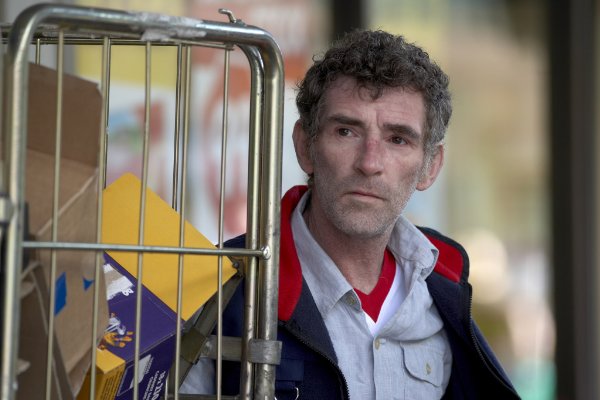 Steve Evets as Eric the postie

The last Ken Loach film before this one (It’s a Free World, 2007) was released first on television in the UK and it dealt with the new brutalism of capitalism with its exploitation of migrant labour. For me it was the least enjoyable of the Loach team’s work in recent years. Looking for Eric is a return to mainstream Loach territory and a very enjoyable movie for a cinema visit. However, I guess that in the circumstances it is perhaps a little too ‘comfortable’ – although it has its moments in exposing current political issues. Perhaps it is the ‘happy ending’ and the football focus that has led some critics to see the film as a departure, a mainstream breakout film. I don’t think it’s either.

If you know Loach, I think that the two other films Looking for Eric most resembles are Raining Stones (1993) and My Name is Joe (1998). Raining Stones, written by the late and very great Jim Allen, is also set in Manchester with another well-meaning but hopeless working-class man this time caught in a spiral of financial doom. It is also one of the bleakest and funniest films to come out of the UK. My Name is Joe is a romance (one of Paul Laverty’s early scripts for Loach) bringing together a man seemingly trapped by his demons with a sensible woman from social services and set in Glasgow. If you’ve seen either of these films, you’ll not be surprised by what happens in Eric. Laverty has become a skilled scriptwriter and the whole thing works very well – although audiences will be puzzled by some of the relationships in Postman Eric’s dysfunctional family. (I’m grateful for an IMDB poster for explaining at least one plot point.)

Looking for Eric features a Manchester postman (brilliantly played by Steve Evets) who is helped out of his crisis of self-confidence by the appearance of the ex-Manchester United footballer Eric Cantona (playing himself – who could possibly impersonate him?). This is woven into the plot quite cleverly so that we understand why ‘little Eric’ might imagine himself talking to his idol. Don’t believe all those stories about this being a big departure for Loach. In 45 years he’s used all sorts of surrealist touches – remember the on-screen football score when the PE teacher pretends to be Bobby Charlton in Kes?

Cantona was famous in the UK for both his fantastic football skills and his assured way of dealing with the media via a series of wonderfully gnomic utterances – don’t leave the cinema before the end of the credits or you will miss Cantona’s most famous press conference. The film isn’t really about football, even if there are a few minutes of Cantona magic in video clips of his famous goals. Watching United usually gives me the same pleasure as root canal work at the dentist’s, but even I would admit that Cantona was a genius on the football field. Now he’s an actor and he brought the initial idea to Loach and Laverty. Cantona the alter ego offers sensible advice to Eric, both in terms of his relationship with his ex-wife and his problems with his stepsons. His most important advice is that Eric must rely on his teammates – the other posties who do care about him. What we see in the film is the ‘saving’ of little Eric when he takes the advice offered. The warmth of feeling and the humour in the film is there in most Loach-Laverty films, but in this case there does seem to be something that might be called a happy ending. However, along the way we do get a firm and convincing message about how solidarity and collective action is the way to solve problems.

I must mention Stephanie Bishop’s performance as Eric’s ex-wife, Lily. Loach’s films always feature inspired casting and Kathleen Crawford, based in Glasgow, has worked as casting director on the last few Loach features. She’s done a great job. All the cast are Mancunians, or at least Lancastrians, as far as I can work out. Stephanie Bishop has no previous credits but I thought she was terrific. As Loach says on the film’s website, casting an actor like John Henshaw opens up so many possibilities because he can switch from serious drama to broad comedy in a flash. He matches the performances of Ricky Tomlinson in previous films. He becomes the team leader of the posties – most of whom are played by comedians from local Manchester clubs. Overall, the policy of ‘local casting’ means that we do believe that all of this could happen in a ‘real’ community.

Only one negative came from the screening – the print. You can never tell with digital prints whether the fault was in the original footage, the conversion to digital or the projection itself and the computer, but several sequences were presented in a way that made me feel like I was watching the film through a pair of old tights. Since Barry Ackroyd’s cinematography is usually one of the pluses for a Loach film, this was a real disappointment. Still, it couldn’t prevent my enjoyment. If you have a choice, try to see the analogue print.

As usual, this Ken Loach film opened earlier and wider in France where it will end up earning considerably more than the £1 million it has so far earned in the UK.