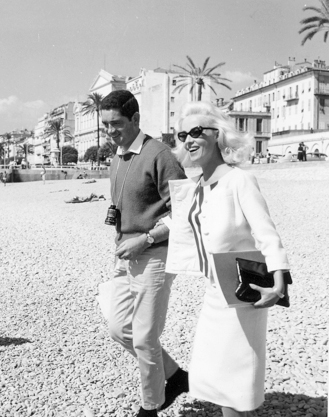 Jacques Demy (1931-1990) is the New Wave director who, like Louis Malle, is difficult to categorise. Some link him to the ‘Left Bank Group’, but this is primarily because he married Agnès Varda in 1962. Otherwise he had little in common with the politics of Alain Resnais or Chris Marker. In some ways he was closer to Truffaut and he certainly knew all the Cahiers gang, presumably via Varda or from his film school contacts. There were several distinctive aspects of Demy’s cinema which made it ‘personal’ and ‘different’.

Demy was fascinated by American Cinema – but by musicals rather than B films noirs. Nearly all of his films present a romance drawing in some way on the musicals of the 1940s and 1950s. He was also a fan of various aspects of classical French Cinema and French popular music culture. Demy was a native of the West Coast of France in the region around Nantes and this coastline provided the backdrop for his best known films, Lola (1961), Les parapluies de Cherbourg (1964) and Les demoiselles de Rochefort in 1967. These films draw on various Hollywood sources – On the Town (1949), the Stanley Donen film about sailors on leave in New York is an obvious influence on Lola. The stars of Demy’s New Wave films are the women (and the music of Michel Legrand). In his first four films these are Anouk Aimée, Jean Moreau, Catherine Deneuve and Deneuve again with her sister Françoise Dorléac. By 1967 he had a full star cast – Danielle Darrieux, Michel Piccoli, George Chakiris and Gene Kelly. Demy moved to the US to make Model Shop in 1969 and after this his career foundered. The early quartet of films have survived however and are well worth watching, both for their own specific qualities and because they represent a different side to the New Wave.

Demy’s second film was La baie des anges (Bay of Angels 1963). Jeanne Moreau as a platinum blonde is a bourgeois wife with a gambling habit. The film starts with a typical New Wave tracking shot by Jean Rabier (who had been an assistant to Henri Decaë on Louis Malle’s Ascenseur pour l’énchafaud (1958) before shooting several films for Chabrol and then for Varda and Demy). The camera appears to be mounted on a car or truck which is driven at speed along the deserted promenades of the Riviera. It reminded me of Jean Vigo’s ‘city symphony’ film A propos de Nice (1929) photographed by Boris Kaufman. The action then switches to Paris where a young man in a boring accountancy job is persuaded to visit a casino by a colleague. When he wins a considerable amount on the roulette table, Jean (Claude Mann) decides to change his holiday plans and instead of visiting relatives in the country he finds a hotel in Cannes and starts to visit the casino. Here he meets Jackie (Moreau) who he had briefly seen earlier being thrown out of a Parisian casino.

The main part of the film is a melodrama about sex and money. Jean and Jeanne have a tempestuous and whirlwind affair driven by the thrill of gambling with its intense highs and lows and moments of exhilaration and despair. There is passion and indeed violence in the relationship and the narrative has an ‘open’ ending that is quite abrupt. What this points to is the curious mixture of ‘fantasy romance’ and cold realism that seems to infuse the films I’ve watched.

I enjoyed Baie des anges. At times I thought to myself, “there isn’t much plot”, but at the same time I realised that I was engrossed by the rich texture of the images and the way in which the narrative unfolded. Moreau is a star actor, but I wasn’t completely convinced by Claude Mann. Sometimes he appeared perfect for the role and sometimes out of his depth. Jeanne Moreau’s hair was my main concern. I presume that it was meant to signify ‘artifice’/’brittleness’. I certainly didn’t like it, but it worked in the sense that it somehow enhanced Moreau’s extraordinary ability to look soft and alluring one moment and hard and frankly terrifying at others.

I’m hoping to watch more from Demy soon. In the meantime, there is a clip from Baie des Anges on an earlier posting here.

Senses of Cinema article and links.