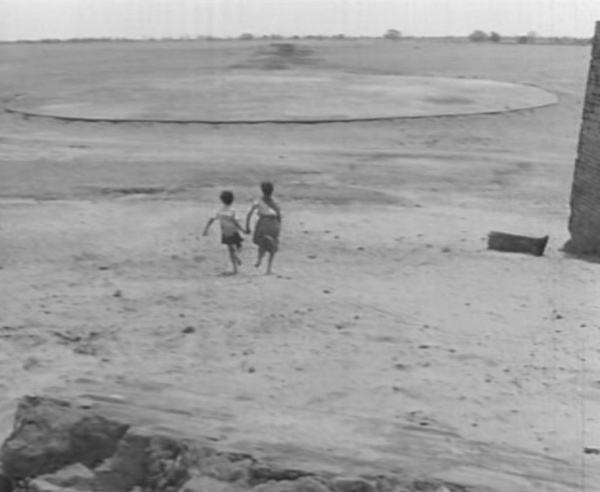 I was drawn to consider Ritwik Ghatak because of the dedication by Mira Nair at the end of The Namesake, a film I am using again as part of a course on ‘diaspora cinema’. Nair was referring to the ‘Masters of Bengali Cinema’ – with Ghatak alongside Satyajit Ray. But she might also have been referring to a master of diaspora cinema or more properly ‘exilic cinema’. Ritwik Ghatak (1925-76) was born in Dacca, then part of Bengal in British India. Bengal had been partitioned before in 1905, then restored in 1911 after protests. But in 1947, East Bengal was allocated by the British to the new state of Pakistan. Ghatak found himself in the new West Bengal in India and the trauma of partition – the confusion over the identity of ‘home’ – stayed with him, not least in the trilogy of films released in the West of which Subarnarekha is the final offering. (The film was made in 1962, but not released until 1965.)

Subarnarekha refers to the river of that name (translating as ‘golden line’) which runs through the relatively new state of Jharkhand into West Bengal. Into this strange landscape (forests bordering a valley of sandy shores and rocks beside the river) comes a group of refugees from the partition in 1948. Ishwar, an educated man, travels with two children, his young sister Sita and a lower caste boy, Abhiram, whose mother was taken away by thugs employed by a local landowner. Ishwar is fortunate to get a job from an old schoolfriend who owns a foundry in the area. But although economically secure, Ishwar is troubled by a sense of loss about home. Years later he has a form of breakdown when he realises that Abhiram and Sita are in love. He cannot accept the lower caste young man as a member of the family (although he has brought him up as such). The film ends tragically.

Ghatak is not as widely known as he should be (i.e. outside the circle of serious cinephiles and historians of Indian Cinema). He was at least as important as his contemporary Satyajit Ray and in some ways more so, given his brief stint teaching at the FTII (Film and Television Institute of India) at Pune in 1966 in which he influenced future directors such as Kumar Shahani and John Abraham. His fame has spread outside India over the thirty years and more since his death.

It’s perhaps not so surprising that Ghatak’s work is not immediately accessible to audiences. He avoids the populism of commercial cinema, yet doesn’t have a coherent humanist art cinema style like Ray, or even a committed political stance like Mrinal Sen. In the same sequence, he might move from what appears to be a conventional social realist approach to portraying village life/city life to a highly expressionistic portrayal of a moment of emotional tension. On closer inspection, however, his seemingly conventional realist camerawork is often undermined by staging in depth with disturbing angles and compositions. Music is integral to the trilogy of ‘exile’ films (which includes the earlier A Cloud-Capped Star (1960) and Komal Gandahar (1961)). Cloud-Capped Star shares with Subarnarekha a brother-sister relationship in which the woman is a singer of Bengali songs, many written by Rabindranath Tagore (1876-1941), the towering figure of Bengali literature.

There is some very good material on Ghatak on several trusted websites. I would recommend the entry on Subarnarekha by Acquarello (and the debate which follows) and the extensive paper by Erin O’Donnell posted on the Jump Cut website. I’d like to draw attention to just some of the points made in these pieces and add a couple of further observations.

I’m taken by O’Donnell’s analysis of Ghatak’s use of melodrama. She suggests that it comes from drawing on a wide range of other melodrama forms including from European and Russian Cinemas as well as theatre. At the same time Ghatak makes use of traditional Indian stories from Hindu mythology. The result is this very cinematic camera, but an unusual mix of other influences placing the resultant films in this no-man’s land between the ‘social’ films of Hindi Cinema (including the films of Guru Dutt and Raj Kapoor) and the art films of Ray and Sen.

The films work by using the family as metaphor for the impossibility of creating ‘home’ out of the despair created by partition and exile. Subarnarekha is contextualised by a series of historical events which mark the earlier part of the narrative – the terrible famine in Bengal in 1942, the successful halt of the Japanese advance into Northern Burma and then Bengal in the latter stages of the war, the partition and the exodus to Calcutta and finally the death of Ghandi. After this and the beginnings of a new life by the Subarnarekha River, the time period becomes less distinct and title cards merely refer to a few months or a few years later marking the period when Sita and Abhiram are growing up. I was struck, however, by the abandoned RAF base (i.e. from where the bombers left for Burma). This is where the children play and where Sita has various adventures. The hulks of abandoned aircraft and the few surviving parts of buildings (from only a few years ago) seem to act as a ‘doubling’ of the signifiers of a life that is no longer possible, of times that have irrevocably changed.

Ghatak’s films are not easy to watch, but they have moments of enormous joy and elation as well as darkest despair and everybody should see at least one of them.

See a very short clip from Subarnarekha on the IndiaVideo site.