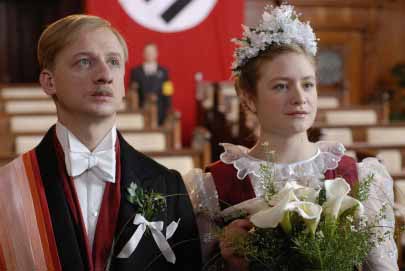 I approached this screening with some trepidation, especially after seeing the trailer. Having recently watched Jiri Menzel’s earlier film Closely Observed Trains (1966), which I first saw 40 years ago, I was both excited at the possibility of seeing something similar (both films coming from novels by Bohumil Hrabal, something of a Czech literary hero) and worried that the film’s approach would be stuck in a kind of 1960s timewarp.

At the end of two hours I was surprised at how easily the time had passed but also somewhat disturbed by the lack of any clear response I had to the film. It’s beautifully made with excellent performances and it looks wonderful. But it starts with an ‘iris-in’ and ends with an ‘iris out’ and this indicates its old-fashioned appeal. Not that this doesn’t have its charms and its nice to see so many older and less beautiful people having a good time. On the other hand, it is nearly always elderly men and nubile young women. I’m trying hard to think of any woman over 30 in the film at all. The women are beautiful and they are beautifully photographed (a kind of tasteful leer perhaps). The exception is the film’s star name, Julia Jentsch, here playing a Sudeten German and Hitler fraulein. She is rendered as almost a frump – a tribute to her acting skill and star presence.

The main problem I have with the film concerns the central section dealing with the Nazi period. The plot concerns a man of limited stature, literally ‘John Child’, who we see making his way in the world from the 1930s onwards – the story is told in flashback by the older John/Jan in the early 1960s. The young man has two desires – to become a millionaire and to be surrounded by beautiful women. He will achieve both these desires and then be imprisoned by the Communist state after 1948. As several reviewers have pointed out, there is a ‘Good Soldier Schweik’ feel to the story – emphasised by the award of a medal to John by a diminutive Hailie Selassie (an extremely disturbing sequence!). To use a cliché, this aspect of the story is very ‘Central European’. I was reminded of the recent Svankmajer film Lunacy – later I realised that the same actor, Martin Huba, has important roles in both films. I thought too about recent Polish comedies that I’ve seen (which often weren’t funny, even if I could see that they were meant to be funny) and at one point I thought of Roman Polanski, playing the sidekick of a vampire hunter in his 1967 film Dance of the Vampires. In these other films, however, I think it was clear what was being satirised. I was less sure about I Served the King of England.

The title refers to the maitre d’ of the posh hotel in which Jan works. This man is rather pompous, but he is patriotic and meets his fate at the hands of the Nazis. Jan is the everyman figure buffeted by the flow of historical events, but never engaged. I didn’t warm at all to the young Jan. I found him quite irritating, even more so than the hapless young man at the centre of Closely Observed Trains.

There is nothing wrong with making a period film as such and it seems that there is a desire to do this in several European countries in respect of 1930-1950. Black Books has been mentioned as a Dutch WW2 film that shares some elements with this film (though not its comedy style) and several Holocaust films (The Pianist, Fateless) have also appeared recently. I also recognise that Czechoslovakia in this period responded to the Nazi takeover in ways which still need working over (there is a kind of meta text about ‘Empire’ and German identity in Bohemia running throughout the film – the older Jan spends his years after imprisonment in exile in the mountain villages where German Bohemians fled after 1945). Closely Observed Trains does involve the resistance movement, but in this film Jan sees and feels very little. There are limited occasions when the impact of the Nazi Occupation takes centre stage. Perhaps this is more ‘truthful’ about the Czech experience? I don’t know and this film isn’t going to help me. So, this probably isn’t the best film to show to students to encourage them to explore East European Cinema – although it would help to dispel the image of Prague as a destination for British weekenders looking for a cheap drinking hole. The hotels are truly ‘splendid’. Overall, I think this is entertaining but disappointing. But along with Lunacy, it does represent another high profile Czech film in distribution (albeit somewhat late after its launch at Berlin in 2007).

Since the screening I’ve read a number of interviews with Jiri Menzel in the Guardian and on Kinoblog and I’ve had the chance to revise my views. I can see Menzel’s argument that the recent film is an advance on the 1966 version with a hero who is more ‘truthful’, but I can’t get over my distaste for him (and the fact that at times he looks like a strange cross between Neville Chamberlain and a blond Hitler). This isn’t a slight on the Bulgarian actor Ivan Barnev, rather the context for the character. I’m never really interested in people who want to be millionaires, which I guess is my problem. However, it does occur to me that the concept of a male character who is unheroic and to an extent deceitful, but still very attractive to women is shared with Jacques Audiard’s wonderful film Un héros très discret (1996) starring Mathieu Kassovitz. That film seems to me to be a more successful attempt to explore how, in this case French, history has represented the German Occupation. The use of a certain kind of comedy is the difference between the films.